Yes, We Do
Elison Alcovendaz 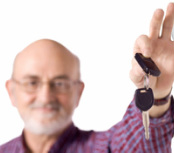 He once stole my car and drove all night to follow a twenty-year old woman to Reno. He was eighty. I found him at the Sundowner, a hard cigar unlit and stashed in the corner of his mouth, three empty glasses of straight rum abandoned by his penny slot machine. An old cowboy. Let’s go, I said. He smiled when he saw me, all dentures and no lips. The neon lights bounced off his bald head. Give me the keys, I said. Sure thing, he said.

Five years later I found him at the DMV in a brown Members Only jacket, standing in the middle of the office, a yellowed bandage on his right eye. People took care to walk far around him. What are you doing? I asked him. He quivered a finger to his mouth. Memorizing the eye chart, he whispered. We’d cut up his old license long ago. I thought of him on the road in that creaky Oldsmobile with no reverse, his good one eye, and tugged on his leather sleeve. C’mon, I said. What about my car? he said. You took the bus, I said.

Two years after that I caught him on a neighbor’s lawn, his stiff jeans drenched to the calf, cane buried deep into the grass, staring at a rosebush. I pulled the car to the sidewalk and yelled through the open window: Get in. He looked at me, then looked at the house then looked back at the bush. A wasp buzzed around his face and landed on his arm. I honked the horn. He turned and said: I still remember. What? I asked. I still remember, he said. EZFGMHC.

Last night a policeman called me. Said he found my grandpa outside the DMV office in nothing but his long johns, banging on the doors like a madman. Said Grandpa looked too frail and crazy to move this time. I pulled into the parking lot. I pushed through the hordes of onlookers. The news vans and police cars. Grandpa stood at the center of it all, in wrinkled, veiny, blinded glory. You have to go, I told him. He leaned in my direction and, smiling, said: Do we?