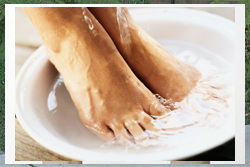 “Let me tell you about pain,” she says. “You know nothing about pain.”

Blisters mar her swollen feet, white and pus filled, red around the edges where her shoes rub.

“I’m on my feet all night bringing food to truckers and their whores,” she says. “I never get to sit down.”

She soaks her feet in water warm as fresh blood. Cigarette smoke rises from her lips and covers her face.

I wonder if she’s fucking a trucker on the side. She could be. I don’t want to think too much about it.

“The cooks,” she says. “They’re always yelling and throwing things. There’s no call for that.”

I smoke a cigarette and watch her sitting on the couch, the television mumbling in the corner. She leans her head back. Today’s her day off. Later she’ll go down to the bar and drink a few whiskeys. She’ll flirt with the drunks there, but that’s all she does. She never brings them home. I don’t know if she goes places with them, if she’s fucking men I don’t know. I do know that she’s tired all of the time and losing weight. I know that I can’t tell her things anymore. She worries and frets and makes herself sick. I keep my secrets and she keeps hers. Silence stands between us, a layer of cotton around something brittle and breakable.