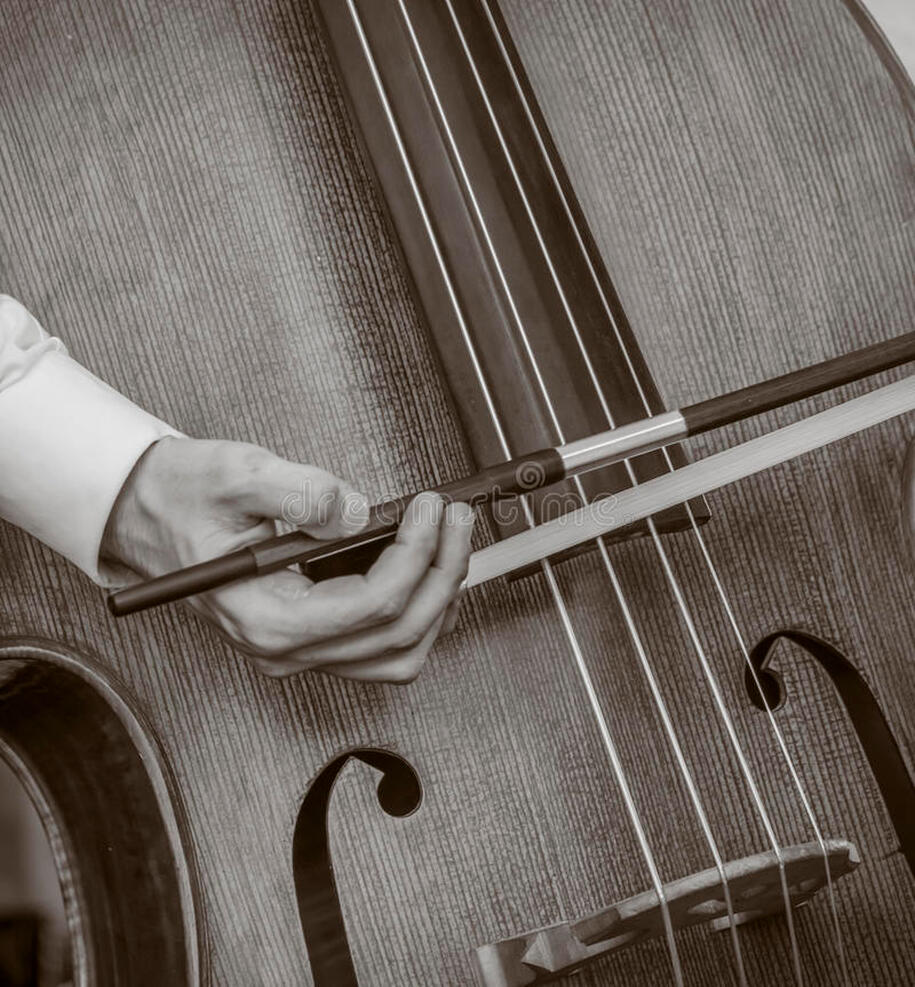 Kevin leaned on the upper deck railing with an arm around Betsy, his instrument, a burnished upright bass. He stared down at the churning wake, as the cruise ship began a slow turn out of the harbor. Moonlight bounced across the waves. Passengers paused and patted Kevin on the back and thanked him for the tunes at dinner. He nodded and shifted his gaze back to the ocean.
“Oh, goodness, what a beautiful night.”
“Yep,” Kevin said.
“Look at that moon.”
“Something else.”
“Can’t wait to see those beaches in Mexico.”
“Right, yeah,” Kevin said blankly.
Wassup with Kevin? Is he shy or a stoner or on the spectrum or what? People in his hometown of Terre Haute, Indiana were always asking. No, he’s a bassist, his friends explained. Bassists are different. Kevin only performed on the wooden upright, no electric. Straight out of college at Indiana State, he played traditional jazz in the old guy combos that gigged at weddings and country clubs and the Moose Lodge. His bow arm like a windshield wiper and his head sway reliable as a metronome. He provided a steady, in-tune sound and standard thirty second solo riffs. Pleasant and smooth, nothing flashy.
It paid the rent and his living expenses. Until he turned twenty-seven and got kicked off his parents’ health insurance. Thus, the gig on the cruise ship. Good money for a few weeks. He did not own a car or a television. No monthly cable bill. He was notoriously frugal, but not solely on principle. It was just easier without stuff. Existence was easier in the slow lane. Some would call it the breakdown lane. Because, yes, there was a psychiatric history and a couple of gap years, when it had been impossible to get out of bed. Kevin’s un-medicated depression was well documented among the roster of therapists that he’d seen since age fourteen. Un-medicated by choice. Kevin and his parents were instinctively afraid of expensive, mind-bending medicine. And the depression could say things that could never be expressed otherwise, in full sentences even.
“It’s about the sadness of the planet. My blues are an amplified echo of planetary grief.”
How the heck to respond to that from a fifteen year-old? His parents gave him a wide berth. His therapists nodded and scribbled a note on their legal pads. Some made the mistake of pursuing a grandiosity angle. Kevin was anything but. Some went more sociological and inquired about life on Kevin’s ‘planet’.
“It orbits at the edge of the solar system. Astronomers debate whether it is really a planet or not. Maybe just an errant space rock. There is evidence of life, though the atmosphere is a swirling, gray fog.”
“What is the evidence of life?”
“An underground river system.”
“Nothing visible on the surface?”
“Except to Betsy.”
“Who’s that again?”
“My instrument.”
“Oh, yes, say more about Betsy.”
His protector and doppelganger. Don’t mess with Betsy. She ran interference for him on a variety of fronts. Physically, Kevin resembled his instrument, tall with broad hips and chest and a long neck. He was bullied a lot in grade school, but as soon as he joined the orchestra in junior high and started carrying around a monster-size case, the bullying stopped. Betsy was named for his maternal great-grandmother, from whom he inherited the musical gene. She played ragtime piano in the ritzy brothels, back when Terre Haute was the prostitution capitol of the Midwest.
Kevin developed a homegrown treatment for his depression. It involved a rigorous monitoring of his chronically erratic blood pressure. Keeping his blood pressure steady, hey, it somehow kept other stuff steady too. Several times a day, he slipped on an arm cuff and pumped up the pressure with a little rubber bulb connected to the monitor, until the cuff was tight, but not too tight. This process also came to function as a booster for his self-esteem. He took deep breaths and his chest swelled. He hummed a melody and gazed at the Pressure Rating Indicator, hoping for the best.

Tony walked up and paused to take in the situation. He chewed on an unlit cigarette and rolled the Zippo lighter between his fingers. A uniformed steward stopped and said, “Madame, please, what’s wrong? Do you need to see the ship’s doctor?”
Betsy shook her head and swallowed. She dumped it all down into the underground river. Kevin knew exactly what she was doing.
Betsy said, “Not to worry. Just can’t seem to clock out.”
“Sure that you don’t want to go to the infirmary?” Tony said.
“It feels like I’ve been working a really long shift and I just can’t seem to clock out,” Betsy said.
“Some sleep might help,” Kevin said.
“It used to,” Betsy nodded, “back when I could get a few hours. Can I ask you a favor?”
“Sure, what do you need?” Kevin said.
He signaled to Tony that he had things under control, thanks. He agreed to escort Betsy to her cabin and sit down beside her on the bunk and hold her hand, until she managed to doze off. Then, he was supposed to leave. She specifically instructed him to leave.
But he didn’t. Not even when she started to snore. It was a riff he couldn’t get out of his head. Starting with a walking bass line. He had always squashed any urge toward composition. Now the tune wouldn’t leave him alone. He wanted to write a song and call it, ‘Undertow’. Kevin knew that Betsy had a theory on such mental phenomenon, already spouted several times - that the brain summoned material like this to reveal a link to something else. What kind of undertow, pal? Was it about not wanting stuff? Maybe he did actually want something. A motorcycle with a sidecar for his instrument. That would be cool. Paralyzed by internal contradictions, he gazed around her neat cabin. Summer clothes on hangers in the narrow closet. Outside her porthole, the relentless blue sky.
“Why are you still here?” Betsy asked, yawning and rubbing her eyes.
“Sorry, you had rolled up against me and I didn’t want to risk waking you by moving,” Kevin said, which was sort of true.
“How long was I asleep?”
“A couple hours. You feel better?”
“Yes, thanks, much better. What time is it?”
“Almost time for the shore excursion.”

They had signed up to visit the Mayan ruins at Tulum. Speaking of life on other planets. “This place is mind blowing,” Betsy said, “These people knew all about the demons.” She pointed to a parade of figures carved in a stone lintel.
Betsy had visited Tulum before on a previous cruise, and she was eager to see it again. A tall, ziggurat temple perched on a cliff, overlooking the surf and the shore. The grounds were hopping with tourists. A herd of ship passengers, including Tony, huddled around their Mexican guide. The heat was blistering. Betsy lobbed in excited questions. “What do we know about Mayan music?”
“Was it like early tango?” Tony quipped.
Tony had accompanied them on the tour. Apparently he felt concerned enough about his young bassist to run interference with the boozy, old nurse. Thinking that the kid needed a buffer, Tony purposefully wedged himself between Kevin and Betsy and he parried her interest in the local archeology with cracks about the Mayans as dwarves, as evidenced by the height of their doorways. Both he and Kevin had to duck to get inside the passageways.
Betsy finally took the hint and wandered off on her own.
Tony threw a conspiratorial arm around Kevin’s shoulder and said, “They don’t teach you this stuff in music school,”
“What stuff?” Kevin asked.
“How to handle the crazies at the shows.”
Kevin tried to find the right words to stick up for Betsy, without offending his boss. “She’s not so bad.”
“Here, let me buy you a lemonade,” Tony said. He nudged Kevin toward a vendor’s cart under a sun umbrella.
“And the organizational stuff with a band, like how to make payroll,” Tony continued, “You have to pick it up as you go along.”
Kevin said, “Tony, just so you know, tonight I’m going to be taking some longer solos.”
“What do you mean?”
“I want to try a few things.”
“Okay, but remember, I didn’t hire you to reinvent the wheel.”
They sipped their drinks and stared out at the ocean. Suddenly, a cry of alarm. They turned and saw that someone had crossed the yellow cordon at the base of the steep temple stairs and was climbing on all fours towards the top. It was Betsy. Her straw hat fell off and rolled away. Her sunglasses fell off and clattered down the steps behind her. She continued climbing. The security guard and the other tour guides yelled for her to stop. “Off limits, señora!”
Betsy kept on going, until she stood silhouetted against the sky at edge of the tall temple above the cliff and the rocky beach. More security with guns chased after her.
A crowd of tourists assembled on the ground, calling for Betsy not to jump. Everyone thought she was going to jump. Kevin hurried over to join them. He called up too, but his voice was lost in the din. At least he could see her face clearly now and he could see that she was not going to jump. Betsy’s painted eyes were wide open and she seemed to have spotted something on the far horizon. She waved and blew a kiss.
The guards caught up with her and grabbed her arms. Betsy was escorted slowly back down the steep steps. She was taken away to the security office. The captain and the management of the cruise ship were notified and they decided to make an example out of Betsy, so that other passengers would not flaunt the rules on the shore visits. Her possessions were packed up from her cabin and she was driven to Cancún and put on a plane back to Miami. That was the last Kevin saw of her.
“At least we don’t have to hear her fingernails tapping on her glass every night,” Tony said.
“She actually kept pretty good time,” Kevin said.
Tony adopted an “I told you so" attitude about the episode, telling jokes about it to lead off the sets for the final week. It pissed off Kevin enough that he refused Tony’s invitation to join him in a visit to the white sand beach at the next port-of-call, Progreso. Two overnights. The moon was waning. Kevin checked his blood pressure frequently. The water turned from blue to green in the Gulf.
The ship docked at the far end of an enormously long wharf that extended three miles out from the fishing village and the glitzy beach and the shallows. That night in the lounge, during the half-hour break between sets, Tony took Kevin aside and thanked him for his solos and asked if there was a chance he would consider re-upping for the next cruise. Kevin politely turned him down. His excuse: heading home to Indiana to start his own band. When Kevin actually heard the words coming out of his mouth, it sounded less like an excuse and more like a possibility.
“Everybody has to try it sometime,” Tony said.
“Maybe I can hire you one of these days,” Kevin said.
“Casino boats on the Mississippi. Lot of steady gigs there,” Tony said.
Meanwhile, Kevin had to finish out this one. It wasn’t easy. His instrument seemed possessed. His "pleasant and smooth" sound became "hang on for dear life." Surprise overtones and percussive creaks and thumps. Betsy’s tuning pegs reacted to the touch of his calloused fingers. A string snapped. Kevin struggled to keep one eye on the charts. Roll, swing, knock hips, twist. Every night was a wrestling match. Kevin could barely stay in the ring with her.