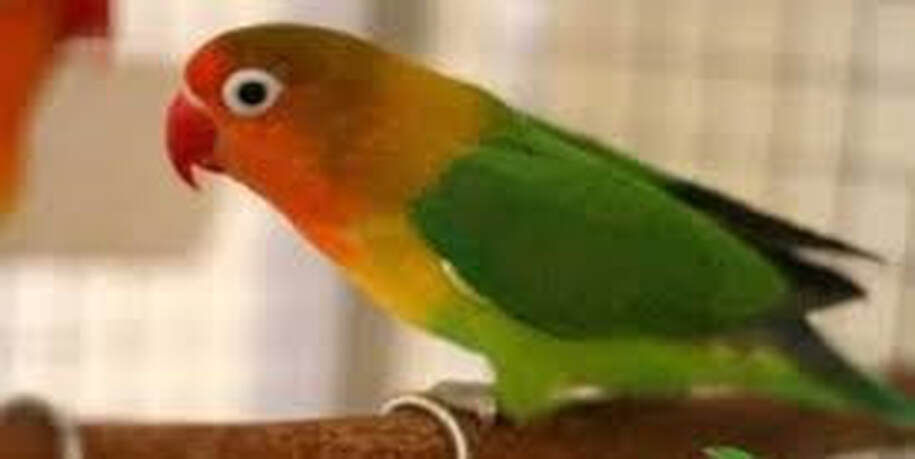 Max Vogel poured milk on his cornflakes, and focused on Robert’s scarlet forehead. Ruth had named him Archie, but Max now called him Robert after Robert Stroud, the Birdman of Alcatraz, who did solitary for forty-two years. Max had read that lovebirds flew in large flocks, chattering and grooming each other all the time. He wondered if Robert had lost his mind living alone so long. Ruth said that lovebirds mate for life.
Beating his wings, Robert climbed the bars to his perch, then scuttled sideways to smack his string of beads against the shit-stained mirror. He leapt to the bars again, now clinging head down, peering at Max first with one eye, then the other. He whistled at him.
Max opened the cage door, and Robert edged down the wooden bar, tested Max’s finger with his beak, and hopped on. He angled his head this way and that, until lowered his head while Max caressed it with his fingertip. Robert angled his head this way and that, until Max had covered all of it. Then he hopped to Max’s shoulder and nibbled on his earlobe. The hairs on Max’s neck stood up and he held his head still, ashamed that he wanted the bird never to stop.
Robert screeched as he side-stepped his way down Max’s arm and rode the spoon as Max ate. Then he jumped into the bowl, splashing like a robin in a birdbath, until Max spooned him out and deposited him on the table. When he finished preening, Robert took off,  on flight muscles long atrophied, for the dining room where he crashed head first.
Max scooped him up and roared, baring his teeth as he brought Robert’s head up to his mouth. The bird scolded him and nibbled his lower lip. At the end of their ritual, Max returned Robert to his cage where he resumed his sentence.
Max wandered into the living room, the room in which Ruth and he had actually lived. Sconces bathed the faux adobe walls. Sunshine from the east and south poured through linen onto a huge red, cream, and blue Isphehan sprawled over the hardwood. Ruth had hung a mirror on one wall. She told him that it made the room look bigger. He had not thought that the room needed to look bigger, and still found his reflection unsettling, stocky and bald, bags under his eyes. His smile looked obscene. He wondered what his patients had seen that they dared not tell him.
He sank into the over-stuffed suede couch. He had told Ruth a house was just a box in which to live, and that she was just trying to copy something out of Better Homes and Gardens. He winced and fell back into the slow surrender of the down cushion.

Max cleared the plates. They stood side by side in silence, she scraping the dishes and he racking them in the washer. Then they wandered into the living room where they sat, she in a chair and he on the couch, with nothing to say.
She glanced again down the hallway toward the door.
The doorbell rang. For a moment, Max hoped that if he ignored it, she would also.
John Passaro stood on the threshold. He wore a faded knit shirt and paint-spattered jeans. “I was in the neighborhood,” he said. “I thought I’d drop by. See how you’re doing. Since you’re not taking calls.”
“I don’t answer to you.”
John said gently, “You going to let me in?”
“No.”
“What’s the matter?” John asked. “Somebody holding you at gunpoint?” He craned his neck to see beyond Max.
Max closed the door to a slit.
"You got a woman in there?”
“So?” Max glanced back at Ava.
“Max!” he said, “It’s me. Let me in . . . Please.”
“No.” Max slammed the door.
Passaro pounded on it.
Max leaned his forehead against it. “Go away.”
“You can’t do that,” Ava said.
She shouldered him aside to pull the door open. John entered, staring at her with those big cow eyes, and shook her hand. He surveyed the house from where he stood. “Nothing much has changed. Painting’s gone.”
Ava looked carefully at his pants. She asked if he were an artist.
“A hobby. I’m really an analyst.” He smiled sadly. “Like him.” He gestured toward Max. “He raised me from a tadpole into the magnificent creature you see before you.”
His smile faded when he turned Ava’s hand over to reveal ancient cuts so dense they had merged into a sleeve of scar from wrist to elbow.
Max shook his head. No way he could have missed that—he had tasted every inch of her.
Ava pulled her hand away. “You don’t have scars?”
John said, “Everyone has scars.”
“My,” she said. “He teach you that?”
“He has scars,” John said. “Look at him.”
Max clapped his hand to his cheek. Then he recovered and said,            “It’s Phoebe, isn’t it? That’s why you’re here.” He scanned John’s face.
“She flew the coop.”
John shook it off like a shot to the head. “We need to talk,” he said.
“Please.”
Max set his jaw. “You need to talk.”
“Max.”
Max said nothing.
John’s eye twitched. He covered it with the heel of his hand. “I should have locked you up when I had the chance.” He turned to Ava and asked for her number.
“None of your business,” she said. “What’s yours?”
“No,” Max shouted.
John turned to him. “Afraid I’ll steal another one?” Then he pulled the door closed behind him. Unlatched, it swung open a crack. Max put his shoulder to it.
It was quiet again. She was staring at him, as though through a new lens.
“Give me a drink,” she said. “Anything.”
Max handed her a bourbon over ice. She slugged it down and wiped her mouth with the back of her hand. She asked for John’s number.
Max shook his head.
She beckoned with her hand. “The number.”
“You’re mine,” he said.
She sputtered and laughed and said no more, but took him by the hand and led him to the bedroom.
In the half-darkness of morning, Max awakened and whispered her name.
He heard the front door click.
He sank into sleep and awakened to a colorless dawn. He called the number he had surrendered to her in the night, but heard only John’s familiar greeting, which harkened to better times.
As the sun rose, he sat in his robe eating cornflakes in the breakfast nook. He had forgone his usual shower, clinging to Ava’s last trace. Robert teetered on his spoon, then hopped into the bowl. Max watched his exuberant splashes decay into the spasms of a drowning moth before he fished him out. Robert sat on the table with his eyes closed, shivering, his feathers puffed out. Ptiloerection, thought Max. That’s what they call it.
He opened the French doors for the solace of his garden. To his surprise, Robert fluttered past his ear. Annoyed, he trudged across the patio to retrieve him, but instead found himself trotting, then running flat out, as the bird, just beyond his grasp, pulled away, climbed sharply and disappeared over the massive oaks at the end of his yard.
Max stumbled forward, shading his eyes as though he were an outfielder who had lost a fly ball in the sun. He tripped on a sprinkler head and sprawled face first into the drift of penstemon and larkspur. He climbed to his knees and pressed his hand hard against his cheek to stop the lancing pain. The water came on with a hiss, and as it blasted him, he roared like a beast brought at last to bay.