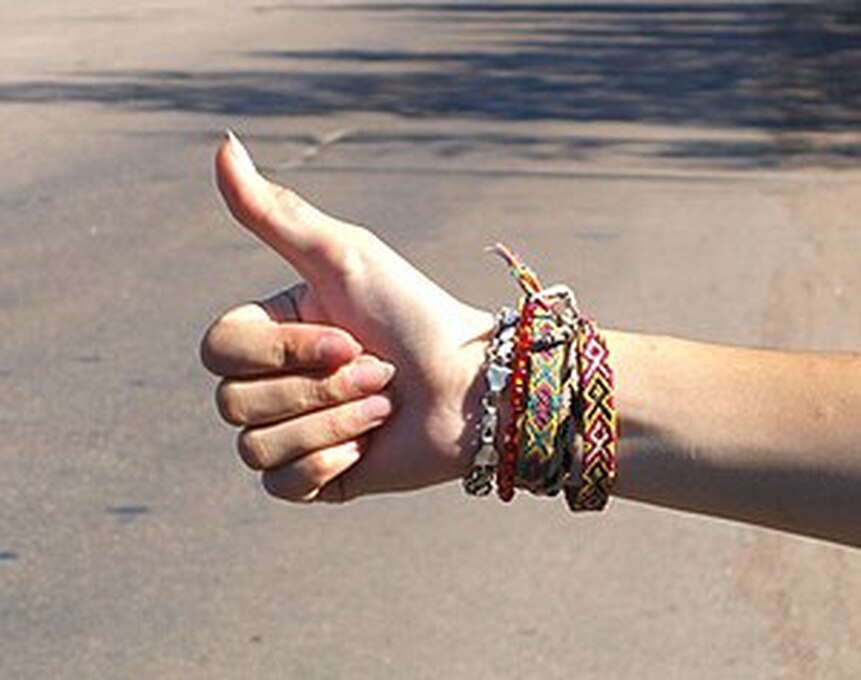 The Trip Not Taken
Kaia Gallagher


As I approached the late model Ford, a voice in the back of my head urgently repeated, “Do not to get in the car.” It was the fall of 1969 and I was a college sophomore, impatient because the bus I was trying to take to the neighboring town of Harvard Square was delayed.  Why not try to hitch a ride, I thought? It turned out to be a bad idea.
From my campus dorm at Tufts University, Harvard Square was located about three miles to the south. It was a good hour walk, a thirty-minute bus ride, but only fifteen minutes by car. Over the past year, I had made the trip many times, attracted by the intoxicating mix of coffee shops, bookstores and clothing shops designed to entice college students. I knew the stops the bus made along the way and the intersections where the traffic slowed. I also knew how much faster I could get there by car.
The driver who stopped to offer me a ride looked to be in his mid-30s. He wore a baseball cap and his skin was pock-marked with acne scars. Gripping his steering wheel with calloused hands, he smiled a toothy grin as I approached the car and told him I wanted to go to Harvard Square. All he said was, “Get in.” Despite the clamoring voice that told me to turn down the ride, I thought it would be rude to refuse his offer. When I climbed into the car, I noticed the front seat was slick with clear plastic seat covers.
Thinking back on that moment decades later, I can see how naïve and trusting I was. At the time, no one openly carried guns and random assaults on women were rare. There were occasional news stories about young women who disappeared, but I reasoned it was because they had been foolhardy by walking alone down a dark alley or by jogging at night. What harm could there be, I reasoned, in taking a ride with a stranger on a Saturday afternoon in the middle of a heavily populated Boston suburb?
For the first few minutes, neither of us said anything and I found the silence in the car to be unnerving and uncomfortable. He asked, “Are you a student?”  When I responded, “Yes,” I remembered that I hadn’t told my roommate where I was going or when I planned to be back. If I disappeared, it might take my friends at least a day to realize that I was gone.
From childhood, I viewed hitchhiking as an adventurous way to travel to where I wanted to go. When I was a young girl, I frequently walked a mile to the suburban shopping center near my house, all the while putting out my thumb to see if I could get a ride. When a neighbor picked me up one day, she gave me a stern lecture, telling me I could never know who might stop to pick me up. Her words of caution drifted through my head as I glanced over at the driver who had given me a ride.
The roads in the Medford-Somerville neighborhood are narrow, typically congested, and not designed to move traffic efficiently. On that particular Saturday, as the driver inched his car forward, I started to think that maybe I should have walked. When we approached Massachusetts Avenue, I began to breathe a bit easier, anticipating that the traffic would move more briskly on the four-lane road. Yet, instead of taking a right turn, the driver veered toward the left onto a road that angled away from what I thought was our destination.
With my heart beating a bit faster, I asked, “Is this the way to Harvard Square?” The driver never took his eyes off the road, as he replied, “Oh, we’ll get there.” His smile which was meant to be reassuring only made me more unsettled as the voice in the back of my head began repeating “Do not believe him.” I tightened my grip on my purse and began looking for the latch that would open the door on my side of the car.
As we made our way slowly block by block, my anxiety increased since I was sure that we were drifting further and further away from what I knew to be the road to Harvard Square. The neighborhood houses we passed by no longer looked familiar and the drive was taking longer than usual. The driver seemed to be a wound-up ball of energy, tense, hyper-alert and very much in control, as he never took his eyes off the road and tightly gripped the steering wheel.
When the car finally slowed down at a red light, I decided to bolt. Unlatching the car door, I jumped out and yelled back, “Thanks.” As I ran towards the nearby sidewalk, I could hear the driver screaming, “HEYYYYY!”  Hearing the anger in his voice, I trembled to think what might have happened if I had stayed in the car.
Where would he have driven me? What did he intend to do? The nightmarish possibilities rushed through my mind as I ducked down a side street, wanting to make sure there was no way for the driver to come after me.
As I walked block by block and retraced my way toward the familiar roads I knew, I realized how far off course we had been. As much as I wanted to deny it, it was clear that the driver never had any intention of taking me to Harvard Square.
I stopped hitchhiking after that day and became an inveterate walker, happily ignoring the many cars that passed me by. I also resolved to listen when the voice in the back of my head warned that there was danger ahead. Somewhere deep within me, I recognized, was a wiser consciousness, more in tune with the ways of the world, less trusting and watching out to keep me safe.
Blue Lake Review