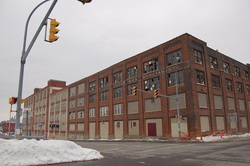 Wayne meant to burn the old factory down. One late summer’s evening he loaded his pickup with three five-gallon cans of gas, and drove over there. Most of the factories along the way were also closed. Even Rainbo on the corner, where they’d drunk shots and played pool, had shut its doors.

Nomad looked the same—offices up front, assembly lines out back—except for the chain link fence and barbed wire ringing the buildings. They’d cranked out one hundred RVs a week when he’d started here in the spring of ’69. In those days anyone who wanted work could find a job. It was a year now since the last RV rolled out the door.

The usual crowd assembled. Norm from Sidewall gave Wayne a wave. Roma from Electronics offered a beer. Red, the roofer, leaned against his restored ’63 ‘Vette, grooving to the eight-track sound of the Stones’ “Satisfaction.” Their old foreman Newt stood talking to the Amish boys who’d built cabinets.

Wayne joined Randy Miller on the hood of his big, chromed-out ’58 Buick. Hunched over a doobie, Randy wore the same Army Ranger shirt he’d worn that morning in ’71 when Wayne picked him up at the bus station. He’d returned from Vietnam with a facial tic and hands that wouldn’t stop shaking.

Wayne, not home long himself, shrapnel still lodged in his knee, had managed to get him on in Flooring.

Randy offered a toke, but Wayne declined in favor of the flask of 151 and Coke he kept in the back pocket of his cutoffs. His wife Jill had salvaged them from a favorite pair of bell bottoms gone ragged with age.  He’d worn those jeans to dances at the Armory. He’d started out wearing them that first time with Jill in the rear of his old man’s Oldsmobile. The river they’d parked next to had run clean back then.

Randy and Wayne sat hip to hip, old friends not needing to speak. Nearly nine o’clock and the pink light of a setting sun continued to bathe them in its gracious glow, not a breath of air among the corn rows. A squad car cruised past, but the police made no effort to run them off, content to observe from a distance. Lee Cramer dropped his pants and shot the cops a moon, and the ladies from Final Finish howled. Someone told Lee to put that damn thing away.

Mick and Keith finished “Satisfaction,” and Red fired up the Beach Boys. The sweet harmonies of “Little Deuce Coup” echoed across the broken pavement. Roma and Norm started to dance, and in no time ten or twelve others joined in. They did the Mashed Potato, the Swim, and the Twist. Debbie Wenger, in her granny glasses, denim skirt, and sandals still shook it like she had in high school, even if she was carrying a few extra pounds.

Hump Haller, the table saw man, sidled up to Randy and Wayne. He wanted to know what they thought. Randy flicked his roach and said he was Ready-Eddie. Wayne agreed, tonight was the night.

Hump jammed his hands in his pockets and stared at the empty building. “Some are worried that if we burn it down, we won’t be able to party here anymore.”

“Not if we stick together.” Vandals had already broken the windows and gutted the place for wiring. The way Wayne saw it, burning the old factory to the ground did the owners a favor—at least they could claim the insurance.

“We need to make a statement, Hump.”

“We had napalm,” Randy said. “We could really make a statement.”

Wayne could see the others watching. They’d sent Hump to talk him down, but earlier that spring they’d felt differently. Angry and hurt from losing jobs and benefits, they’d liked Wayne’s idea of torching the place. But over the summer, their weekly meetings to plan the arson had disintegrated into hootenannies, mellowing them out as surely as a Donavan tune. Back in the spring it had been “burn, baby, burn;” now it was “make love, not war.”

“Anyway,” Hump said, “we were thinking to cruise the drag. You know, from the post office to the Tastee-Freeze.”

“They won’t allow it.” The city hadn’t allowed cruising since the Eighties.

“How can we cruise?” Randy said. “The damn Tastee Freeze is closed.”

The truth was, most of Main Street was closed, graffiti scarring windows where mannequins once stood; meth heads plying corners where shoppers once gossiped.

Across the parking lot the music died, the women stopped dancing, and the men put out their smokes. They weren’t watching Wayne anymore. They were getting in their cars.

“How about you?” Hump asked Randy.

Wayne had no doubt.

Hump shook their hands before walking away. “Right on,” he said.

One by one, the Chevelles, GTOs, and Mustangs rumbled onto the street. Debbie tossed them a flower from her hair. Red flashed a peace sign. After a while, only Wayne and Randy remained. No air hammers jacked the silence. No third-shift lights illuminated the gathering purple haze.

Wayne grasped for that same rage, but came up with sad and bitter instead. “Oh, hell, they’re just trying to figure it out.”

Just that morning, he’d heard geese honking overhead. Now, Wayne felt the first chill of summer fading to fall. He wondered what they’d do come winter, when life turned a whiter shade of pale; when their unemployment ran out and they couldn’t pay the heat.


Maybe then he’d give it to them.