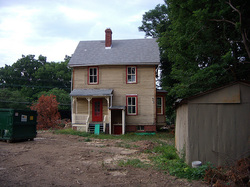 
My older brother and I were too young to understand the concept of moving to a new house—we thought we’d be moving back to our old place in a week or two.  So, while the parents were occupied with the moving van and its burly attendants, we descended through the foreboding trapdoor in our closet, into the crawlspace, and there buried a Peter Pan Peanut Butter jar, filled with valuables that have long since slipped the reach of my memory.
I have often speculated on possible artifacts interred in this accidental time capsule: gum ball rings, marbles, bugs, my brother’s broken Hopalong Cassidy wrist watch, cereal box tops, Mercury dimes, bottle caps, whistles, the severed head from a Howdy Doody puppet . . . .
These ghostly inventories eventually triggered in me a salmon-like urge to return to the site of the buried jar.  I drove nearly forty miles to a dimly familiar cul-de-sac, and after cruising up and down it a couple of times, parked my car on the side directly opposite the boxy little house my parents had purchased, with Dad’s G.I. loan, in 1952.
The trim of the house had since been recklessly painted a tacky grape color, and the front lawn looked like a moonscape, but the original awning, over the kitchen door, still clung stubbornly to the wall and my memory.
While sitting in my parked car, gathering the nerve to approach the current residents for a chance to tour the old place (and perhaps open a certain trapdoor), a young dog-faced man, with a shaved head and tattooed neck, stuck his face in the driver’s-side window and asked me what the hell I was doing here.  He kept one eye fixed angrily on me, while his other eye seemed to be independently scanning the sky for aerial assaults.  He wore an oil-stained tank top: transmitting the layered odors of an auto mechanic who’d been bar-hopping for the past three days.
“I used to live in that house,” I said, pointing like an orphan in a fairytale etching.
The dog-faced man screwed his canine features into a vicious smirk.  “Well I live there now,” he said, then sauntered across the street and crawled under an old pickup truck that was suspended on jack stands in the driveway.

There was no trapdoor in the closet of the new house my family moved to in 1955.  Instead, there was an outside entrance to the crawlspace, covered by a framed screen, which could be lifted up and out from its location on the west side of the house.  My brother and I pretended we had discovered the entrance to the tomb of a forgotten Egyptian pharaoh.  We explored the tomb a few times, until I was bitten by a black widow spider.
My brother dragged me out from under the house, like a miner pulling an injured comrade from the ruble of a cave-in.  My mother, in a panicky attempt to take charge of the situation, instructed me to: “Stay calm—stay calm. We don’t want the poison to rush to your heart and kill you.”
While the poison was completing several laps around my cardiovascular system, my mother forced me into our Nash-Rambler—the so-called “transportation car”—and drove like a Destruction Derby Racer to our family doctor’s office, where the doctor greeted us with a benign smile and a menacing-looking hypodermic.
When we returned home, I was put immediately to bed.  I recall having a high fever and being fed copious amounts of orange juice through a flexible straw.  For weeks afterwards, I’d wake up screaming from the same nightmare: a giant spider—the size of a catcher’s mitt—crawling up my bedroom wall, dragging, like a mythological punishment, a large blood-red hourglass.