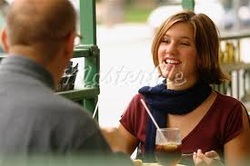 In the diner parking lot, the sun beat down on the cars. Inside, though the fans swirled, the leatherette was sticky from the sunscreen and sweat of shorts-wearing tourists. Trying to escape, a fly buzzed at the upper corner of the large window.

With the familiar smile, the waitress served the man his iced tea and the woman her coffee. She told them, in the raspy voice of a heavy smoker, “So you know, there’s no pancakes since Eddie left.  No one else makes them.”

“Fired?” the daughter asked, eyes on her coffee, reminder of her status.  Three cups had been brought to her today:  by her maid, her secretary, and the waitress.

“Didn’t have to. Cook was always giving him dirty looks, shoving him out of the way.”  She barked in a low voice, mimicking  Cook, “Not good for clients.  Too much sugar.  Diabetes.”

The father had heard the shouting last time he ate at the diner.  Eddie had argued that clients in the diner for so short a time, should enjoy themselves.  Cook had yelled that he knew what was best; pretty menu photos would sway the judgment of vulnerable clients.  Owner’s silence, which each side interpreted as approval, had escalated the mess. “So, Eddie quit.”

“I’ll have egg whites with a whole wheat bagel,” the daughter ended the conversation.  “Dad?”

The man shook his head. The waitress touched him lightly on the shoulder before shuffling back to the kitchen.

“You should eat, Dad,” the woman said. “A body needs three meals a day.”

“A man’s body needs other things, too,” he said.

The woman looked down at her grey suit and arranged the paper napkin on her knees. “I wouldn’t know about that.”

“No, of course you wouldn’t,” the father said. He sipped at his iced tea. “How are the girls?”

“Jane is reading three grades above her level. Kelly is a clown.” The woman placed her slender fingers around the mug of coffee. “Like her grandfather.”

The man scoffed. “I’m not so funny any more.”

“Just because you don’t feel it sometimes,…."

“No, not sometimes. Never. I never feel funny, not since she left.”

The woman shook her head. “Move on, Dad. She was too young.”

“I’ve been trying to for weeks now.  Laundry. Movies. Golf.” He clasped his fingers together and began to roll one thumb over the other. “Always thinking about her.”

The woman looked around the diner. Her eyes fell to a couple near the back, shoveling food, not saying a word. “Well, there’s nothing I can do about that.”

“I’m not asking you to do anything,” he said, like a Clydesdale in Florida, proud of the weight it shoulders in unbearable heat.  “Even if you could do something, I wouldn’t ask you to.”

“No,” she said, stretching her trim torso. “And you shouldn’t. I would never ask you to do anything you would not want to do.”

“That’s right. I would not ask.” The father bit into the straw and accidentally cut his upper lip. He wiped the blood away with the paper napkin and placed it on the table.

His daughter looked at her watch, did not notice the napkin.

The waitress winked at the man as she brought the woman’s plate. “Hon, isn’t there anything you want?”

The waitress coughed as she laughed. “You and me both.”

The daughter shook her head. “Pancakes fill you momentarily, but lack any real sustenance.”

When the waitress had gone, the man said, “Jealousy and pride make a world without pancakes.”

The woman cleared her throat. “How’s your cat?”

“When I love, I spoil. Maybe I spoil too much. Did I spoil you?”

The daughter chewed her food, head down. She did not notice her father looking at his smart phone. No messages. No texts. No calls. After she had finished half her plate, the daughter asked the obligatory questions. “Are you all right? Need anything?”

In the silence that followed, the waitress returned with the check. “For next time, Cook makes mean eggs and bacon.”

The man spoke up. “She doesn’t eat bacon. Her husband is vegetarian. When they come over, I don’t serve meat.” The waitress nodded politely and left. The father continued, “In my own house, I don’t serve meat because I don’t insult your husband. That would tear at your relationship. That would make anyone unhappy, wouldn’t it?”

The daughter’s eyes became like slits. Had she been a cat, the ears would have folded down on the top of her head. “It’s not the same. You can’t put her in the same category as my husband.” She pushed the plate away.

The father’s head bobbed imperceptibly. “No, I can’t do that.”

“My husband and I will be together for a lifetime.”

The father saw the dark spots on the back of his hands. He put his hands under the table.

The daughter leaned into the table. “If she felt so strongly for you, she would not have cared how I treated her.”

The father still tasted the blood inside his mouth. He took out his wallet and placed two bills on the table. “That’s enough.”

“You need to move on, Dad. Maybe somebody without children.”


Beyond his control, his thoughts returned to his former lover. Her curved hips, her symmetrical breasts, and the lips she opened for him so willingly. She would have noticed the blood on his lip, given him ice to seal the cut, and doted on him afterward as if it were a war wound.  Staring at his daughter, the father mumbled, “Move on.”