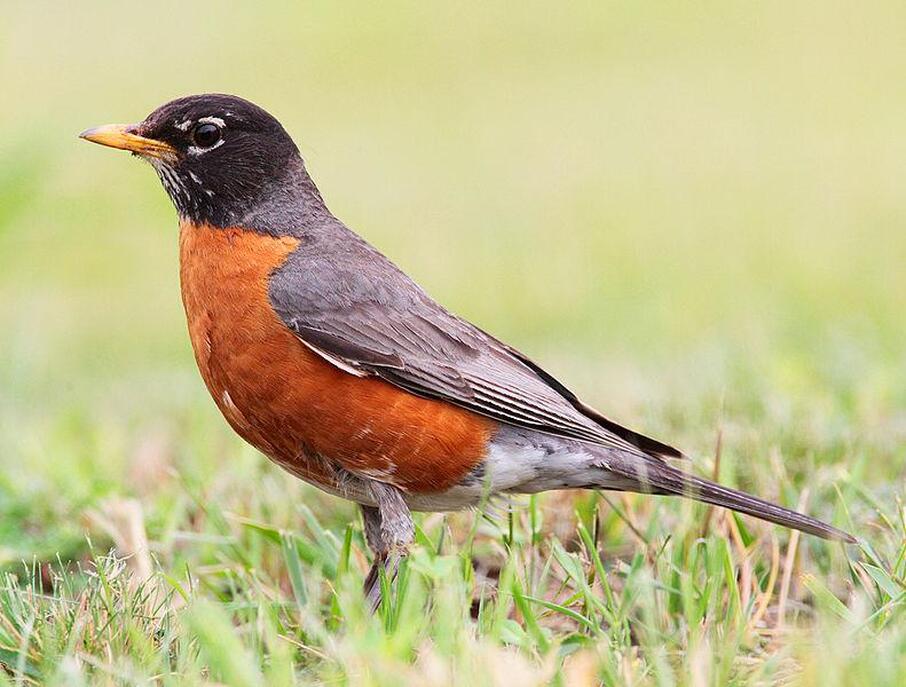 In my house, there is an arched window in the living room that sits high above the floor, revealing the long, naked limbs of the backyard ash tree. One afternoon, Mom gestured to the window with a kind of mild surprise.
Perfectly framed by the windowpane, and perched near the trunk of the tree, was a red-breasted bird.
She wondered aloud if it was a robin. My brother and I did not know, and we gave little response; we were immersed in a game. Neither did Dad know, who took one glance, grunted, and then headed onward to the garage. The bird fluttered away moments later, and the question was left open-ended.
But it made a louder, more dramatic reappearance. At around 4:30 AM, the backyard was filled with the shrill cries of a young male robin. For some reason, Dad was the only one sensitive to the noise -- Dad who worked on motors and engines, things that clattered and banged with earth-shattering ferocity -- He himself was snapped awake by bird calls.
This marked the beginning of a five-day feud between Dad and the robin.
At first, Dad relied on simple tactics, such as tying a rubber snake around the base of a tree limb. By the next morning, we discovered the snake was a failure, so Dad looked for reinforcements, and purchased a large, lifelike owl figurine. Not only did this irritate Mom, because she thought the statue was ugly and obstructive, but the robin was not fooled, apparently. The chirps resounded at the crack of dawn.
At the kitchen table, Dad debated excitedly, almost gleefully, about his next method of attack: a motion detector that emitted high-frequency sound waves, specifically tuned and targeted towards flying creatures.
I glanced at Mom. Her face looked as equally tired as Dad’s. I am not sure if she was tired due to a lack of sleep or due to the conversation. When Dad openly suggested another solution -- sawing off the robin’s favorite tree branch -- Mom made it clear she was vehemently opposed to the idea.
Dad sighed and nodded. The plotting came to a close, at least, for now.
~ ~ ~
My bedroom door swung open. A shadow flit across my half-open eyes. It was dark, but I recognized Dad’s footsteps. He was walking as quietly as he could manage under the weight of his years. He paused when he reached the shelf. Then he flew out of the room and hurried down the stairs.
Five minutes passed and Dad did not return up the stairs. Across the room, my brother was sound asleep. I decided to investigate.
The sun had not yet broken over the horizon. The kitchen was dull and dark. I peeked over the side window, opened the door, and entered the cold springtime air.
Dad was kneeling on the grass. He was unusually still. I also noticed, not more than two feet away, my BB gun. And his expression – I wasn’t sure how to decipher it at the time. It was something like repressed shock, as if he had tried to solve one of my math problems and failed, and was sorrowful over the fact that he could not help with my homework.
When he noticed me, his whole body became alive. He told me to get a shoebox from the closet and a steak knife from the kitchen.
I brought back the requested items. Dad was silent while he proceeded to poke a series of holes into the cardboard lid. Then, using the knife, he pushed the motionless body of the robin inside of the container. The bird was nearly decapitated, and its head bobbed to a rhythm that was separate from the movement of its feathered body.
Dad handed me the box and told me to get inside the car. It took twenty minutes to reach the clinic. By then, it was 5:46 AM, and it was still dark, so we had to wait another fifteen minutes for the clinic to open. These minutes passed in silence, with Dad sitting in the driver's seat, me on the passenger’s side, and the box in my lap.
The receptionist greeted us inside. Dad told her it was an emergency.  The ceiling lights were glaringly bright. Here, in the middle of recovering from my sleep-like daze, I realized I was still in my pajamas.
Soon enough, the veterinarian appeared in the hallway. She took the box and opened the lid. Without the faintest sign of insincerity, or discernable change in facial muscles, she said she would see what she could do. Dad nodded appreciatively.
Outside, as we were walking to the car, Dad told me he was sorry for waking me up, and that he would explain to Mom what had happened. Then he exhaled very deeply. I think he was waiting for my response, so I said that everything was OK, to which he seemed pleased.
On Sunday morning, I woke up feeling renewed and well-rested. In the living room I found Dad propped up on the armchair. Warm light streamed through the windowpanes. As I sat near his little table, I noticed his coffee cup was emptied, save for the granules. He asked me if I got a good sleep. I said I did. He rubbed his eyes and said that was good, that was really good, and for a moment he gazed at the upper window, through which we could see the leafless limbs of the backyard ash tree.