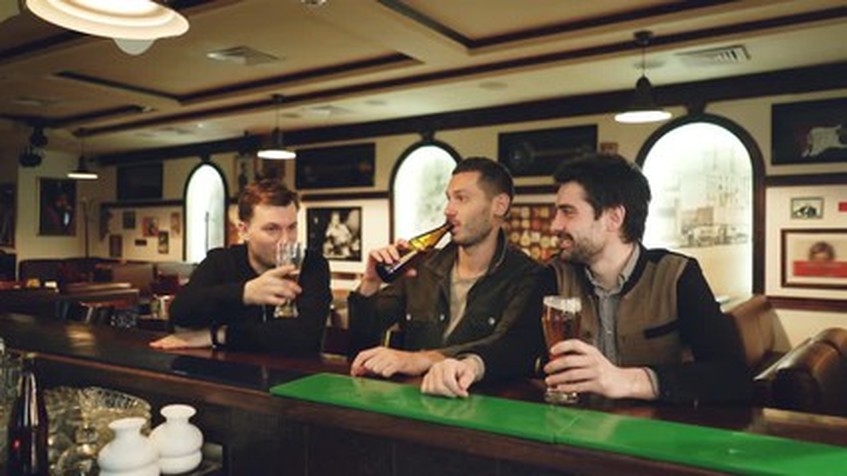 I spend the next few days at home studying computer manuals and preparing for the dairy inventory. They won’t pay me for helping but maybe I’ll learn something. Saturday night I decide I should make an appearance at Mother’s where I find Rich talking and Artie drinking his beer. Artie listens to anyone with a full pitcher.
“The joint serves ground beef every meal,” Rich says, nodding at me when I sit down. “Meatballs, breakfast sausage, sloppy Joes, Salisbury steak, anything but a real hamburger. All tastes the same. But I draw the line at tacos and burritos. I’ve eaten enough of that Mexican shit.”
“Not much Mexican food around here,” Artie says. Mike shows up with a fresh glass and I ask for a pitcher of Genesee Ale.
“Just wait, the Mexicans are coming,” Rich replies. “What about you, Curt? You like beaner food?”
“I stick to the four basic food groups--canned, frozen, take out and beer. And coffee.”
“You eat yoghurt. Saw it in your fridge along with the beer cans.”
Artie purses his lips and shifts his tobacco plug to his other cheek. “Yoghurt sounds disgusting.”
My pitcher appears and I pour myself a glass, refilling Artie and Rich. Artie hops off to the bathroom, wending between tables on his crutch and one leg like a slalom skier.
“Been wanting to talk to you,” Rich says in a low, serious tone.
Here it comes, the Debby talk. I sip my beer and look up.
He continues, “You think that spic that sells pot would sell me a pound or two?”
“Never asked if he sold quanity.”
“Would you try for me?”
I shrug my shoulders, heart pounding, remembering Freddy’s warning. I search his eyes. If he was trying to get even with me for Debby, I’d expect to see some anger. He wants to bust Edwardo. “You don’t need me.”
“You’re right, I can buy it myself. Got an advance from my boss. I can pay you back, too.”
“No worry.”
“Can you talk to him, though? Set it up.”
“Sure, I’ll talk to him.”
He slaps my shoulder. “You’re a great friend.”
Artie returns, followed by Debby. She plants a juicy kiss on Rich’s cheek, carefully avoiding his moustache. She wears tight blue slacks and a ruffled white blouse. Brass loop ear rings hang below her curly auburn hair and her makeup is fresh. She smells like a spring garden. I glance away.
“I’m going dancing at Pearl’s,” Rich announces proudly.
“What about me?” Debby replies with a cute pout. “I’m going, too.”
“Of course you are. You’re my woman.” Rich returns her kiss and they hug, caressing one another’s back. Their cloying exchange makes me burp.
Soon enough they leave and Artie I and return to our beer.
“Mike washed the windows,” Artie says.
I swing my eyes toward the sidewalk where the dim streetlights shine brighter than usual. A silhouette crosses my view and pulls open the door. Eduardo heads back to the pinball machine. I wait a few minutes until he’s alone.
“How’s your car running?” Eduardo asks, shaking my hand.
“Good for now. How’s the family?”
He shows me a new snapshot of his wife and two girls taken at the mall photo booth with its faded khaki curtains.
“The older girl’s almost ready for school,” I say.
“That’s Maria. Our baby’s Janet, and my wife Linda. Now you know everything about me.” He shoves the billfold back into his jeans and scans the room.
“I know you sell car parts. Got a friend who wants to buy a car.”
“Sounds like he should talk to Freddy,” Eduardo smiles. Freddy sells two or three cars a year from his used car lot on Chenango Street.
“Freddy doesn’t have the car he wants.”
Eduardo nods. “Who we talking about?”
“Rich.”
“I’ve seen him. Not very friendly. He’s a friend of yours?”
“He talks about you a lot.”
“Talks about me?”
“Yeah, and he has other friends.”
“What do you mean?”
“Might be time to sell your parts someplace else.”
Eduardo stares at me, disbelieving. He cracks a smile and I hold my blank expression, finally turning away.
Back at the bar Artie says, “What was that all about?”
“Doing a favor for a friend.”
A few minutes later, Eduardo pushes open the front door and exits into the blowing snow.

Later in the week a suit from Poughkeepsie appears at the dairy. I’m supposed to show him how to enter shipping data into the computer and run my nightly jobs. I feel like a celebrity for about five minutes until I realize I’m training him to do my job. My boss says they’re only shutting down the Binghamton plant and shifting the work to Poughkeepsie for four weeks. I don’t trust bosses any more than I trust the law.
After work I head to Mother’s where Artie coaxes me into buying a pitcher. The bar has a festive air with tiny Christmas lights strung above the dusty bottles behind the bar, and Mike sprayed snowflakes on the outside windows. He even taped a pine branch above the cash register. Eduardo misses his 8:00 round.
Rich arrives late, spinning on to the stool next to me. He glances toward the pinball machine and says to me in a measured tone, “I see the trainer but no monkey.”
“Good to see you, too, Rich.”
He looks across my chest at Artie, his foul mood drawing attention, drinkers pausing to watch. “Some guys think they do the right thing, but they fuck it up.”
Artie catches my eye.
Leaning back, Rich slaps sixty bucks on the bar. “Think they know what’s happening, like they have it all figured out. Right, Curt?”
I catch his glare and send it back. “What if I do?”
“You should have known better.” He stands and zips his jacket. “Good thing for you I never hurt my friends.” He pushes his way across the bar and shoves open the door, sending a cold draft across the room.
Mike appears in front of me and slides the twenties my way. He scans the bar. “Show’s over.” He grabs his bar rag and wipes the varnished wood until the gawkers return to their glasses.
“You did the right thing, talking to Eduardo,” Artie whispers.
“Did I?”
“He told me to thank you. Don’t know why.”
“Of course not,” I grin. Artie doesn’t miss much.
He spits into a paper napkin. “Don’t think Rich is coming back either.”
“What about Debby?”
“Moving up. Someone saw her eating dinner at Morey’s with Rich’s lawyer, Jensen.”
“Has a mansion next door to Freddy.”
“That’s him.”
I slide one of the twenties back across the bar and wave for another pitcher.
“Season of joy,” Artie croons at my gesture.
“Yeah, I’m drowning in joy.”