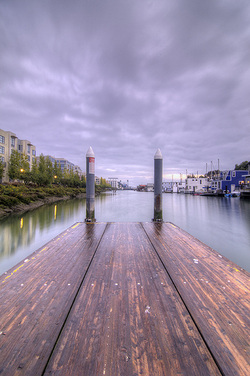 _
The Dock at Old Mission Bay


The dock sways too loose, inescapably coiled in the liquid womb of its life long lover’s arms.  Its algae sated piers, like aged bandy legs, waltz poorly with Old Mission Bay.  The dock struggles with each undulate surge, confused by the tempo of its partner’s relentless waves. Its shriveled deck is no longer a destination, an angler’s hope, a twin mast schooner’s moor.  Hobbled frail by winter ice, sodden by June rains, wrinkled old by summer sun, it still thrives--yes…less graceful than before.  It makes no apologies for its age or extended presence in the shallows off the Bay shore.  It sloughs off its waning health each moment a sun dried plank creaks, as if that slivered board is chuckling at the harmless peak of a larger swell.  Why mope ‘till death it no longer serves an end? Morning is a genesis of blessings the Bay will gladly lend.  From under the lifting dawn mist, Grand Traverse sound will emerge an en plein air canvas daubed royal blues and earthy shoreline greens, as if Monet had spent a season here. The dock wakes daily to the clear azure Bay as if the waters are kissing the saffron sun.  The dock stretches, yawns, limbers up, eager to resume the wobbly ballet, ready to mate again well past mating age.  The Bay obliges its weathered, randy partner with dizzying pirouettes and twirls, ignoring the certainty their affair grows shorter with each spring rain, blue dawn, clear day, winter freeze the dock endures.

Once, a fluttering nymphet on parade, flaxen hair, long, thin, cascaded in gold rivulets past her shoulder blades.  She would have been Debusy’s La Fille Aux Cheveux De Lin, had he known her at the time.  Glassy smooth tropical seas brightly glistened in her glacial blue eyes.  Thin, fair skinned, she was a pubescent blossom bursting vital, driven, bound to thrive with each quake of laughter that shook her body alive.

Humor faded long before her lover left.  What little vigor left ebbed further at her fatherless child’s birth.  Grown old young, no longer lean, hair worried dull dirty blond; all that what went wrong for her pales to the calm stream of solace still flowing in her cyan eyes.


A bullet shattered their window interrupting the spooning lovers' sleep.  The riot woke many lovers early that humid July night.

Maddened human herds wandered the street below like directionless globules of meandering contagion bred in a petri dish of anger, scrambling to meld, mate, parent a more infectious strain of the temporarily insane.  Erratic pistol shots spit choking puffs of Cordite incense at the night air.  Klaxon sirens bellowed nearby in every key on the scale chasing elusive howling chaos.  Pandemic fire spread from block to block.  The lovers resolutely embraced, shivering snug within the mutual sanctity of fear.

Cowering, the lovers pled fright, fate, slim chance save them.  A plague of roiling smoke prowled up to their floor, hunting, sniffing, clawing every crevice for its next victim’s scent.  With the obsessive urgency of zealous converts, the lovers chanted redemptive prayers learned rote as children that until that last moment were never meant.