This is Not a Romance
Nicholas Grider 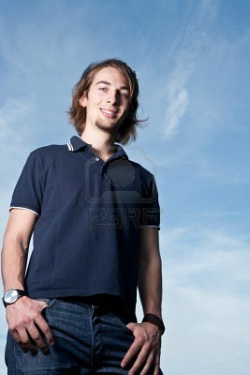 The last time I saw Billy was under an enormous trellis arch in my parents’ summer house garden, ten feet high and ten feet wide, and he was seated on one of the two curved stone benches beneath it and was playing Solitaire with a deck of Tarot cards he had used to foretell my fate a month back, and he stood when he saw me arrive, and he held my sides with his warm thick-fingered hands and smiled, and I said what happens now.

I spent most of my summer at the house wondering what happens now.

He had told me his name was Billy but once when he was sleeping I slipped his driver’s license out of his wallet and the name on it was Thomas Parker.

I met Billy at a bar I went to every once in a while early that summer; I was too young to be allowed in but the bar owners and bartenders knew who my parents were so they let me stay, and I was a moderate drinker and not obnoxious so they never bothered me.

The way he smiled at me, almost a smirk.

One night Billy was at the bar and walked up to me sitting in a booth alone and said you look like you’re a very interesting person, and I told him I had never given it much thought, and he sat down across from me and smiled, and said the thing about interesting people was that they are very attractive, and then he asked me whether he could buy me a drink.

I had already lost my virginity at Princeton to a skinny math major named Douglas Wainwright the year before; it was at a party, not a frat party because that was not our scene but something more low key, and we simply looked at each other and we left the living room and found a bedroom and we didn’t talk much and I sucked his cock and he sucked mine.

Before Billy my sexual experiences tended to be furtive and lackluster.

I’m not sure how Billy talked his way into living with me at my parents’ place in the Hamptons but he did and stayed most of the summer.

Billy stayed in the forest-themed guest room on the first floor but we spent most nights in my bed, full-sized, large enough to accommodate us both but only barely.

My room was filled with scattered books I hadn’t finished yet or had given up on altogether.

All Billy brought with him was one large black duffel bag.  No car of his own.

In the garden the last time I saw him he said that he was right, and I asked him what he was talking about, and he said you are a very interesting person.

After Billy moved in for the summer we didn’t go to the bar because he could use my car and drive to the liquor store and buy us anything we wanted with money my parents left me before they left for the south of France at the end of May.  He also had pot but I’d tried it already and wasn’t interested but watched him smoke and talk.

I’ve never been to Europe.  My parents say it’s great but don’t go into specifics unless talking to each other about shared great times.

When Billy asked me whether I had any brothers or sisters I lied and said no, even though I had two sisters older by five years at least, both living on the west coast.

I would sometimes lie in bed with Billy and while he would sleep I would look at him and wonder whether this kind of thing was anything approaching ordinary, and I decided it probably wasn’t, and then I decided I probably didn’t really mind.

I never asked Billy about his name.

After he left I discovered he had stolen a few things from the house, nothing special, and I knew my parents wouldn’t notice.

The way he ran his hands over my body as if it were as enjoyable for him as it was for me.

I never thought of myself as a very interesting person.

Most of the books that came with the house’s library were decorative only.  Interior-decorated instead of bought.

At the Tarot reading the card representing me was the Magician, which Billy said was good.  He interpreted the cross and row of cards he laid out to mean that good fortune was awaiting me, but that it would be sudden and unexpected.

Sometimes I wondered, even before I saw his license, why he was just called Billy and not something more formal.

He never told me his age, but I guessed he was about ten years older than me, probably.  Maybe fifteen.

The way that he would look at me, a wordless stare, when he wanted to fuck.

Sometimes we’d use my parents’ bed.  And leave it rumpled and stained.

I still read books during Billy’s stay.  I got about halfway through The Brothers Karamazov but Billy kept distracting me with meals he’d cook and conversations we’d have and the times when we would fuck sometimes more than once a day and take a long time doing it.

What he said when he climaxed was yes yes yes.  Whenever I did I closed my eyes and didn’t say anything.

In the garden Billy asked me whether I would consider what we did as a romance.  I said I wasn’t sure.

I’m not sure how Billy came and went on foot considering how isolated we were but he did sometimes vanish on foot, and sometimes he borrowed my car.

The car was a gift from my parents when I graduated from prep school and was admitted to Princeton.

The way he held me as if he couldn’t get close enough.

My parents were unhappy when I majored in English and they asked me to double-major in something else as well and I said I would consider it.

Lying in bed with Billy I thought that there was no way I could go back to Douglas the skinny mathematics guy, no matter how eager to please he was.

Billy told me I read too many books.

That summer I decided I would probably also major in Economics beginning at the start of my sophomore year.  That sounded like something solid, something that would make my father cross his arms and nod his head in approval.

I took care not to do much that my parents would know about that might earn their disapproval, other than majoring in English.

Once while we were drinking he played me a song called “Too Drunk to Fuck” and I liked it but he never told me the name of the band and I had to look it up later.  We got drunk a lot that summer, sometimes beer but mostly gin and tonics.

The way that Billy would appear over the obtuse inverse V of an open book and signal come here with an index finger.

Once Billy told me he never went to college, and another time he told me he went to Oberlin but dropped out.

Billy’s curly black hair, and the way I could run my hands through it.

The last time I saw him in the garden, in the parenthesis formed by the two stone benches, he told me he would keep in touch but that things should probably stay between us.

Subsequent summers I spent at the local bar fruitlessly looking for interesting men.

We never ran out of condoms, even though I never remember him buying any and I hadn’t brought any with of my own.

In addition to The Brothers Karamazov, which I finished after Billy left, I also read Vanity Fair and Moby-Dick and Bleak House.  It was mostly a long book summer.  Mostly a 19th century summer.  Verdant.  Green.

The last time I saw Billy I told him I wasn’t sure what a romance was.  He said that what happened between us was not it.

The way I was soft and bookish and pale.

Billy told me at the bar that boring people are never beautiful, only pretty, and that the difference between the two was substantial.

We never got too drunk to fuck.

The postcard he sent me the following summer, the last I ever heard of him after he gathered up his cards in the garden and put them in his bag and left, was a postcard of the leaning tower of Pisa but postmarked Portland with the simple text “Hello, hope you’re still interesting.  You probably still are.”