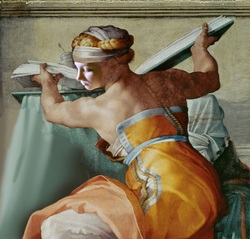 I cannot stop thinking about the Sistine Chapel. I am at work, I am staring at my computer, the quarterly reports are due. I have not been able to concentrate, and there are statistics to be tabulated, ratios to be determined, projections to be calculated.

But I cannot stop thinking about the Sistine Chapel.

I look out the window at the rainy afternoon, and I smell the centuries-old dirt packed hard beneath the ornate floor. In my mind, I breathe in the European body odors of the millions who have passed through the Chapel, their heads tilted high, their mouths open. I hear the echoes of foot-strikes and hushed voices bounce off the creaking old walls and tired foundations.

I had just turned 15 when I saw the Sistine Chapel for the first and only time. The Italian Language Club held just about every kind of fundraiser you can imagine to come up with the money for us to be able to go to Italy for five days.

I laid on the floor and looked at that wondrous ceiling of the Sistine Chapel, my fingers reaching over and intertwining with Lucinda Giacometti’s. Her hair smelled of Wella Balsam, and her shirt smelled of hot iron and starch.

But most of all I was in love with the Libyan Sibyl, her bare shoulders and her golden hair, how her body is turned to reveal her partly naked back, the way I knew Lucinda’s would look that night, after the chaperones had finished their woven-basket bottles of chianti.

I was in Italy, and I was in love with two mythic women.

The rain has stopped, and I am standing in front of my office window looking out at the soaked sidewalks and streets so far below me, and I begin to swirl as if floating, as I had that day on the floor of the Sistine Chapel. The word “sibyl” means prophetess. They are seers of the future. The Libyan Sibyl was said to have foretold the coming of the day "when that which is hidden shall be revealed."

We left the Sistine Chapel, and that night instead of holding my hand while I smelled her hair and put my hand inside her starched shirt, Lucinda held Joey Demonte’s hand, because he had bribed the desk clerk to sell him a bottle of wine.

~ ~ ~
I cannot stop thinking about the Sistine Chapel. Nor can I stop thinking about Lucinda and the Libyan Sibyl, and I wonder if somehow my lust for the latter lost me the former. But I know now that I will stay tonight to complete the quarterly reports and later be alone in my bed, once again.