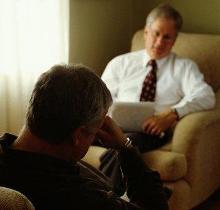 Late afternoon appointments were difficult. Carl was tired and his mind was filled with the turmoil of patients he’d seen earlier in the day. He’d been a psychotherapist for 15 years and the cumulative effect of the suffering he’d witnessed weighed heavily on him, bending his shoulders into a permanent stoop.

He poured a glass of water from the pitcher on his desk and pressed the button to alert the front desk that he was ready for his next appointment. He glanced at the open chart in front of him. He’d been treating Richard Gauley for nearly three years because of severe depression and suicide threats.

What was he going to do with this boy?

The weight that crushed his body had laid waste to his spirit as well. What would happen to Richie if he quit his practice? It was a self-indulgent foolish question, but he returned to it repeatedly. Carl knew what would happen to his patient if he abandoned him; precisely the same thing that would happen if Carl stayed. Richie Gauley was going to die and there was nothing Carl could do about it.

Richard Gauley hesitated momentarily in the door way, then took the chair next to Carl’s desk. He slumped in the seat with his long legs extended and his hands clasped in his lap, but he smiled brightly and his pale blue eyes met Carl’s without the opaque shield that usually characterized his expression.

“It looks like you’re having a good day,” Carl said.

Richard Gauley studied Carl carefully for a moment and then said, “When you’re 18 you don’t need a parent’s signature to buy a shotgun at Kmart.”

Richie just nodded. The smile on his face remained, but now it appeared distant, as if only a memory, his mind already elsewhere.

He did not expect Richie to object. The boy didn’t plan to kill himself today. This was a trial run, not so much practice, but a chance to get closer to the reality of suicide to see how it felt. Richie knew that Carl was a shield, perhaps more of an anchor, who would allow him to dance close to the fire, but with no danger of being burned.

“It’s in the trunk,” Richie said as they walked across the parking lot toward a beat-up 10-year-old Camaro. He handed the keys to Carl.

The double-barrelled shot gun lay on top of a mass of cardboard boxes, greasy car parts and a variety of cheap tools. Richie started to reach for it, but Carl put out his hand and Richie stepped back and allowed Carl to pick up the gun.

Carl broke open the gun to make sure it wasn’t loaded, looked down both barrels, and snapped it back together.

“Turn your pockets inside out,” Carl said.

“It’s the same kind David used,” Richie said, showing Carl he had no shells for the gun.

Three years earlier Richie’s brother, David, who was 22 years old, had squeezed into a narrow passage that ran between the back of the family’s garage and a wall that surrounded their property, and shot himself. The nearby structures must have muffled the sound because no one heard the shot.

That night there’d been a heavy snowfall that covered his body. It was nearly six weeks before David stumbled on his brother’s corpse.

In his office, Carl put the gun out of reach on the credenza behind him and turned back to Richie who had taken his familiar seat.

“I’m going to put you in the hospital for a couple of days, Richie,” Carl said. “I want to keep an eye on you.”

Carl called Richie’s parents.  He’d made similar calls before. Then he called the hospital and arranged for a bed. He put Richie in the break room and asked someone from the front office to sit with him until his parents arrived. Carl had another appointment in 10 minutes.

He returned to his office and wrote a brief note in Richie’s chart. He thought about reviewing some of his earlier notes, but knew nothing would be gained from that. Three years ago he might have interpreted Richie’s behavior as a clichéd call for help. Now he knew that was nowhere near the truth. Richie was not asking for help; he was waiting for the right moment to die. Carl might as well stand in the roiling surf and try to push back against the next wave.

Carl was left nearly breathless by his sense of helplessness. He would hospitalize Richie for a few days and nothing would change. There was no therapy for the forces that compelled Richie toward death. Inevitably, Richie would kill himself and there was nothing Carl could do to stop him.

Carl felt no satisfaction from knowing that he had been able to delay this inevitability and might be able to do so for a time yet unknown.

Trapped, Carl thought. He couldn’t save this boy and he couldn’t stop trying.