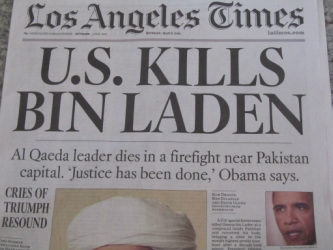 So says the local newspaper on my kitchen table. I’ve had twenty-four hours to let it sink in, feel jubilation, or sadness, or fear, or courage. I feel nothing. Somber, maybe. I sip my coffee. The front-page photo shows hundreds of people cheering, arms raised, and mouths open wide in smiles and shouts. The White House glows in the background. One girl, in her twenties, is wearing a pink long sleeve shirt, left arm raised, finger pointing towards the sky, right arm also raised holding a camera or a cell phone. Her face is tan; she’s spent some time in the sun. She wears a friendship bracelet. I take a bite of my oatmeal. I turn to the obituaries.

My professor says that, when dealing with unruly students, I should try to imagine that their mother either loved them too much or not enough. Does the same apply to those whom we fear or feel uncomfortable or threatened by? Perhaps Bin Laden’s dark little toes curled around his mother’s upper lip as she kissed the soles of his feet. Perhaps she held him close to her breast, listening to hear if their heartbeats pulsed in rhythm. Or perhaps he cried in a corner, legs kicking, squalls that begged, help me, oh please, help me.

James Cunningham, age 54, a former NHL hockey player died after being struck by a train during an afternoon walk. Jane Hutchinson, 63, passed away suddenly at her home in Wisconsin. Gene Slocum, 94, White Bear Lake, MN passed on peacefully.

It’s spring and the little black dog and I go out later for a walk. A mix of split-level suburbia and student housing, there is life on these streets. We walk through a small field of fine emerald green and head down the sidewalk. A robin bathes in the gutter while his mate looks on. The little black dog bounds in the grass, part rabbit, part puppy and pauses once every four bounds to look back at me. He asks me a question with his eyes. I do not know how to answer. Two girls turn cartwheels in a front yard. Eleven or twelve years old, the one in blue shorts says, “And then the dance move is like this, you know, like how Britney does it.” And her friend nods, says yeah, okay, and attempts the
move, gawky legs kicking the air.

These days, I’ve been looking up. Today a red cardinal perches on a rooftop. A common yellow throat witchity witchity wiches in a rustling catalpa tree. It’s been so long since I’ve last seen a red-winged blackbird. Last year, we lived 30 minutes from campus and my drive was through Midwestern prairies and marshland. There were so many red-winged blackbirds. This year we live a fifteen-minute walk from the school I attend. On this walk, I cut through student housing, and there are no red-winged blackbirds. I see boys playing hackey sack with a volleyball and boys leaning out first story windows to turn hamburgers on the grill. I see girls smoking cigarettes.

I did not know anyone who tumbled down with the towers. I do know the scenes, the pictures. A whole city, a whole country, an entire world looking up to see the balls of flame and smoke, the specks of bodies flinging and falling. I do know of Father Mychal Judge. I do not know of the businessman who promised his child a game of Scrabble.

In September of 2003 Tom Junod published an essay in Esquire entitled “Falling Man.” In it, he describes the search for one of the men falling from the twin towers. “In the picture, he departs from this earth like an arrow. Although he has not chosen his fate, he appears to have, in his last instants of life, embraced it. If he were not falling, he might very well be flying. He appears relaxed, hurtling through the air. He appears comfortable in the grip of unimaginable motion. He does not appear intimidated by gravity's divine suction or by what awaits him.” The photo ran only one time. The American public expressed outrage at the exploitation of death during the most horrific
event on American soil. A silent agreement commenced that these public deaths should be censored. Still, there remained those asking, who was this man?

Norberto Hernandez or Wilder Gomez or Charlie Mauro or Junior Jimenez or Jonathan Briley or the Unknown Soldier and the Unmarked Grave.

Towards the end of the article Junod reflects, “Maybe he didn't jump at all, because no one can jump into the arms of God. Oh, no. You have to fall.”

In May of 2011 we are begging for photographs of Bin Laden’s body. Proof, we shout. Was it necessary? we ask. Ding-dong the witch is dead, we joke.

The little black dog and I head home. Out front of my apartment building three little girls sit in a circle. Two are white – one redhead and one brunette - the third is black and wears a hijab. “Who wants to help me find ants?” the redhead asks. “Me, me!” the other two shout. “Eenie meenie minie moe, catch a tiger by the toe…” the red head’s tiny fingers point back and forth between her friends. Already there is luck and chance and democracy. A large crow caws overhead. There is so much I’d like to tell you, my little neighbors. There is so much that I can’t.