Tomorrow Belongs to Us
Cathy Rosoff 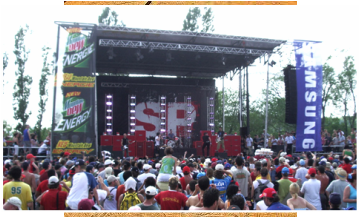 He wouldn’t find out it was a lit cigarette, which actually missed her by a foot, until a bit later when she began hyperventilating at the outset of the ride back to their house.
Immediately cradling her in her arms, Freya called, “Dad?”
As the father dramatically swerved, Alex answered,
“She’s just having a panic attack.  She just needs to put her head between her knees and breathe into a paper bag.”
“Well do you have one?!” Freya asked.
Alex looked back at his crew, but then realized they couldn’t help them without putting down their equipment.  Though still driving, the dad absent-mindedly began to turn back to them.
“Alex?”
“It’s fine – I have something,” he replied, though he didn’t.  “Here . . .” He eventually found a crumpled up paper bag in his messenger bag and handed it to Freya, who handed it to her sister and guided her in using it.
“Yeah, that’s it . . .” she cooed, “Just breathe . . .”
“Has she ever had one of these before?” Alex asked generally into the air to the family as a unit.
“Shhhhhh . . .”
Freya looked back at Alex for a moment, to answer him he thought.  But she said nothing and then turned back to her sister and began stroking her hair.
“It’s going to be okay . . . See? . . . It’s getting better, right?”
He wondered how long he had to wait now before he could broach the subject of what had just happened at the festival.  Could he use the excuse (not that it was one really) of extenuating circumstances to the station so they would give him more money to extend filming a bit?
They rode the rest of the way back to their home in silence.  Since no one asked him to turn it off or even acknowledged it, he and Clark and Dean had made a unified almost involuntary decision without even visually consulting each other to keep the camera and sound rolling.  During the remainder of the ride, his thoughts were consumed with the whole extenuating circumstances/more money thing and the realization that the subtle stench of beer he kept smelling was emanating, he was pretty sure, from Freya’s dress and Thora’s hair.
After twenty minutes of this they pulled up to their house.  Just as the father was putting the van in “park” Thora abruptly opened the door and jumped out before anyone had a chance to stop her.
“Thora!” the dad yelled leaping out of the car and chasing her as she ran into the house.
As Freya began exiting the car, she silently turned back and held up her palm to Alex, Clark and Dean.
Once again, they made the automatic unspoken-about group decision to keep filming as they sat in the van while Thora disappeared into the house.

It was when they were heading to their own van that he heard Freya yell, “Alex, wait.”

He turned around.  Seeing her trotting, almost running, toward him, little pinpricks ran up his forearms as the muscles on the back of his neck unknotted.
“I just wanted to let you know – I just wanted you to – understand – certain things – certain things that I didn’t make clear before.  My father didn’t trick us – I realized that you might have thought that.  And I understand how it might have seemed that way.  We knew – my sister and I knew – what kind of festival this one was – and that it was different than the usual shows we perform at.  And I was only – I only seemed upset with you because it was Thora the cigarette had gotten thrown at.”
“And if it had been you?”
“It would have been different.”
“Why?”
“Because I’m ready.”
“Ready for what?”
“To be degraded for my beliefs.”
Once again, he responded to her with silent stare.
“I’d have 100 lit cigarettes thrown at me – a thousand beer cars poured on me – to stand up for what I believe in.”
What the fuck was he supposed to say to this?
“And I’d do it gladly – joyously.”
“Well . . .”  His mouth twisting into a kind but sly smile, he cocked his head.  “I can’t argue with that . . .”  As he started backing away from her, she simply stood still, watching him.
“What, Freya?  What do you want me to do?  What do you want me to say?  You and your father want us to go . . . So I guess . . .”  He held up his hands haplessly. “This is it . . .”
“I know you think we’re funny.”
“Did I ever say that?  Did I ever laugh at you?”
“Actually, just now, you almost did.  Or at least that’s what it looked like.”  She pointed to the right side of his face.  “With that corner of your mouth turning up for just a second that way it did.”
Jesus, did it?  It couldn’t have.  It was one of the few goddamn times since he had begun filming these despicable freaks (okay, the despicable freak dad and his brainwashed children with despicable not-their-fault freak beliefs) that he hadn’t felt the urge to smirk.
“Freya, you’ve just been through something very stressful,” he said tenderly. “You’re project-you’re imagining – things.”
“But I wonder whether maybe when you’re home back in Australia a little while from now – and when you’re with your hip, glamorous friends at some hip, glamorous nightclub and you’re all laughing at us, whether there might be just one tiny moment where it’ll strike you that maybe, just maybe, tomorrow won’t belong to you.  It’ll belong to us.”
She then began to turn to leave.  But just before she turned her back to him, he noticed she was placing her hand toward her heart and he realized that the little bitch was finally about to do something he had been waiting for her to do, almost begging her to do, since the beginning of filming.
Just before her hand hit her chest, she lashed it out stick-straight and high.
And the camera wasn’t even fucking on.