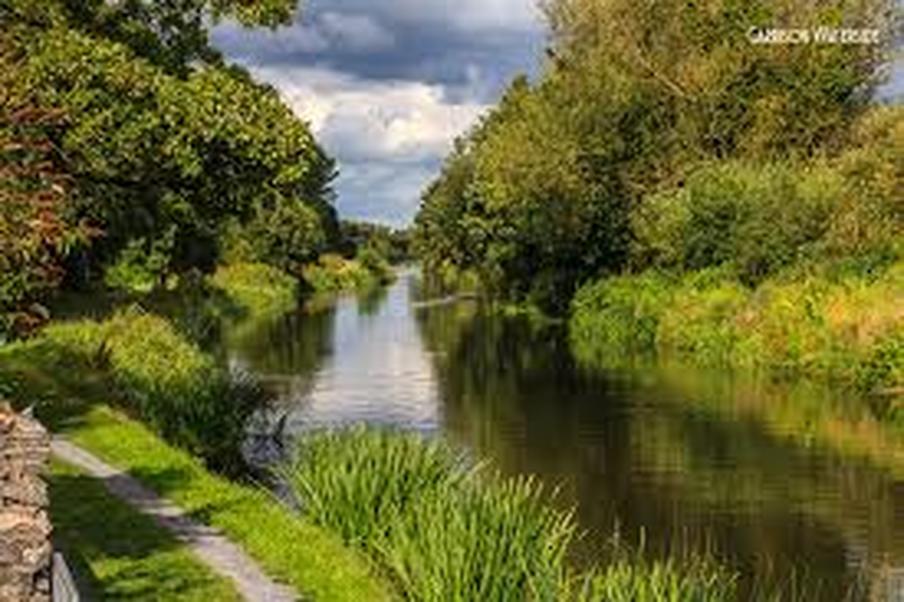 We battle through hazel and birch and ash and beech, and the ferns brush spores on our jeans. I show Nessa heart’s tongue and sycamore leaves and she coos at the shapes, and we talk about dock leaves being good for nettle stings, which she already knows. (Everybody knows that, apparently.) Beads of sun creep through the canopy and rainwater cupped in upturned leaves sprinkles our necks and that feels just grand in the eleven-o'clock heat. Best to hold tight to an Irish summer. Gone in a flash, so it is.
“Can we get ice cream after?” she says.
I hold my finger to my lips. The river sound trickles through the briars.
“Last time I was here I had to get through all this while holding a fishing rod. Not easy,” I say as we scuffle onward through the tangle of branches and prickles.
“Couldn’t we have brought fishing rods today? Maybe we can go fishing someday?”
“Maybe,” I say quietly, knowing we never will.
A familiar, twisted birch. “This is it. I don’t believe it. We actually found it.”
The trees clear before us and we are at the Trout Pool and Nessa squeals. It is just as beautiful as I remember; not shrunk, like so many things from one’s childhood, but majestic and blue and still like a doorway to another world. A ridge of rock overhangs the deepness on the far side and a jagged cliff rises next to us where we stand now on a crunchy beach with pebbles of grey and black. A hazel tree—there it is!—sits atop the small cliff, watching over the pool from its perch among the bugglia and blackthorn, and vegetation hangs down from its base, as it does all around the pool.
This was my secret place.
You have to tell her.
Now it belongs to both of us.
“Careful, okay? It’s a river. It goes underground. So there are currents. You’re not to go far out.”
“Oh, ducks!” says Nessa, and she holds her hands up in delight.
I hand over her pink swim bag. Funny, it is, to see ducks this far into the woods. But there they are. A green-headed mallard quacks.
She unpeels her clothing. “How come you don’t come here more often, Dad?”
I shrug. “Work. It’s hard to make it out west, you know? Actually, last time I was here I was your age.”
“Nine?”
“About that.” I sit on a mossy rock.
She stops in her purple bathing suit for a moment in a sunny spot, one knee ready to lift. “I think this is a special day. A day like this should be”--she searches for the word--“valued.”
I smile at her effort at grown-up speak, which I know is just for me. “I agree.”
She dips a tremulous toe in the water and I’m hit with an intensity of deja-vu. It’s just the beginning, I know, as wave after unwanted wave attacks. I am a chip bag with grease spots; where there was protection before, now there are points that allow black lasers into the core.
It’s all for nothing. Pointless.
I grow tired, crease my forehead, and look into the depths for speckled trout. No vagrant perch, no malevolent pike ever got this far upstream. Downriver, sure, or up at the lake, you’d find coarse fish. Not for catching, or at least not for eating. But here, where the river went underground, the trout, lithe and clever and fast-moving, had the place to themselves, other than the mayflies performing their one-day dance of death over the surface in summertime. Little brown bodies splashing about like crazy. And a school of minnows disappearing underground into the unmapped dedalo below.
Where I’ll be going soon. My number’s up. How ironic that I, never to be seen without a smoke hanging off my lip, managed to evade the darkness hitting my lung, only for it to shimmy and slam me square in the brain instead. Or let’s face it, not ironic. Just damn rotten luck.
Why me? What debt did I rack up, that I must shell out everything now?
It will all wither away. All of this.
Trout are a unique fish. Better to eat than any, yes. But delicately tricky to catch. I would often hold one that my father had caught, sticky in my hand, counting the many spots and trying to decipher the argentate labyrinth of its scales. Examine the glistening underbelly where the spots became fewer, and red. Each fish was different, but also conforming. But, to what?
I learnt all the Latin names, fitting of such ancient monsters. Salmo salar. Trutta trutta. Esox lucius. Cyprinus carpio. Now the words that swim by are altogether uglier. Astrocytoma. Glioblastoma. Malignant. Inoperable.
She may as well drown.
“Look!”
She performs a handstand underwater and my applause is silent to her. Emerges, rubs her eyes and then goes quiet. One of the hen ducks is swimming over.
I stare into the deepest part of the pool where minnows dart to shelter, the familiar slant of rock under the water where it goes deeper blue; straining for the exact point where the minnows disappear.
Still impossible. They used to say that the Trout Pool went all the way down. And it’s true.
There’s nothing deeper. Not that I’ve seen anyway.
I feel time rippling through the blue and an unlocking occurs, a dialogue instantiating with my younger self. And my heart opens, disintegrates, fragments flowing through sunlight shafts into the absorbent abyss.
Nessa is reaching a pure finger to the duck until it’s inches from the bill. The duck emits a single quack, wiggles its tail and does a three-sixty. And she turns to me, her eyes the color of that part of the water, that deepest part.
Just then, I know. In time, without me, love, like a shoal of minnows, will instinctively find its way to her.
“Ice cream?” I say.
She smiles.