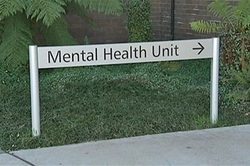 I got a new roommate in the middle of the night.  He shuffled in wearing a hospital gown and carrying the beige plastic tub of items we were provided; a toothbrush, a little tube of generic toothpaste, deodorant, a small bar of soap, a flimsy comb, and a pair of socks with treads on them meant to approximate slippers.  I watched from the shadow under my pillow as he made his bed and flashed an occasional glimpse of ass crack.  In the harsh fluorescent light from the hallway, he looked to be in his fifties, balding, and both wrists bandaged almost up to his elbows.

The nurse brought him his pills in a paper cup and watched to ensure he swallowed them.  She then turned toward my bed, and I closed my eyes.  Insomnia was considered a bad indicator.

I pretended to wake up.

“How are you feeling?”

“Okay.”  They did this every eight hours, and I had no idea why they couldn’t time it around when they wanted us to be sleeping.

“Are you having thoughts of hurting yourself or others?”

“Are you hearing voices?”

“No.”  I always wanted to ask how I could be sure her voice was not in my head, but I didn’t.  Head down, toe the line.  It was the eighth night of this mental well-being interrogation.  She checked my bandages and left.  My new roomie started mumbling to himself.  I put my pillow back on my head and stared at the brightly outlined rectangle of the doorway.

Morning came with the slow infusion of distorted light through the Plexiglas covered window and the sounds of the shift change.  The day shift nurses and orderlies arrived in their scrubs with cheerful patterns like smiley faces or suns.  I recognized Big Zeke’s footsteps in the corridor, and I waited for it.

“Rise and shine!  Let’s make it a great day.”  He said the same thing every morning.  Big Zeke was about six four, and he looked vaguely like a giant bumblebee in his yellow scrubs.  Every shift had a Big Zeke; just in case.

I moved my egg-like breakfast around on my plate to make it look like I’d eaten.  It had the texture of a pencil eraser, and dousing it with ketchup, the only condiment, couldn’t improve the taste.  I marveled at the people who went for seconds.  Did they just have a greater appreciation for a hot meal, or did they actually think it was good?  I carried my plate to the garbage can where Big Zeke was waiting.  He ensured I was disposing of my plastic fork and knife and looked at my plate.

“Gotta eat some more there, man.  Keep your strength up.”

I smiled and nodded.  I knew that my lack of appetite would be noted in my chart.  We all lined up, Big Zeke unlocked the cafeteria door, and he led us to the community room.  A couple people, the fat lady with the shaved head due to lice and the guy in the wheelchair who propelled it by shuffling his feet along the floor, peeled off and returned to their rooms.  We weren’t required to attend the group sessions, but everything was noted in the charts.  I attended all of them.

Brenda was one of the social workers.  She was earnest, and I think she really believed she was helping us.  Brenda led group planning that morning.  It was part of our “success plans.”  We wrote down our objectives for the day and the action steps we would take to achieve them.  I made up some crap about gaining cognizance of my reclusive tendencies and how I would strive to participate in group sessions and reach out to others when I needed support.  I volunteered when Brenda asked who wanted to share.  She was very happy.  Another guy shared that his objective for the day was “to not fucking kill anybody.”  I smiled.  He had been in there for months.  Big Zeke came and got him.  A young woman shared that her objective was to take all her medications that day; not much of a stretch since we were forced to take our medications.

We moved to the activity table for art therapy.  Each of us took our normal spot in the hard, avocado green plastic chairs; except for my new roommate.  Assorted artwork from previous sessions was collaged on the walls.  Red was the dominant color. It was like a psycho refrigerator door.  He sat next to the therapist, and the woman who usually sat there began howling like a wounded monkey.  Once the territorial issues were resolved, the crayons were passed out.  We were instructed to draw a picture of a boat and a place that made us happy.  Howler monkey lady started crying.

“I can’t draw a boat,” she said.  Big Zeke came and got her.  That happened every day.

I colored a picture of a sailboat on a river in a forest, and the therapist told me how good it was.

“The boat is me on my journey, and the trees are peace and hope,” I said.

We moved through the day; music therapy, a video on mental illness, lunch, reflection time, and play time in the gymnasium.  It was pretty funny watching people in hospital gowns playing basketball.  You could glean a lot about the inmates from the clothing they wore.  If you arrived with no clothes, you were given a gown and the slipper socks.  Most people had family members bring them clothing.  Those who had been there a long time and were still in a gown…well, you knew nobody gave a fuck about them and all the coloring and success planning in the world weren’t going to help.

I sat and watched.  It was enough that I had played Chutes and Ladders with a psychotic.  There were about sixteen of us.  It was a constantly rotating roster as people were released or sent to different facilities, and always new ones coming in; almost every night.  Some came in screaming and strapped to a gurney.  Others arrived in a drugged up stupor.  Some were teenagers, most were in their twenties, and very few were older than that.  Was it that younger people tried to kill themselves more frequently or that older people were just more successful at it?  Two women, early twenties, one with almost no teeth, the other with thin, white scars up and down her arms and legs from cutting herself, giggled and tried to get Big Zeke to dance with them.  The two seemed to be best friends.  I didn’t even know any of the other patient’s names. I didn’t want to.

I was called for my meeting with the psychiatrist.  Whereas Brenda the social worker was earnest, he was a clock puncher.  He was old and probably bitter that his psychiatric career had stalled at gauging the likely recidivism of suicidal people.  He never made eye contact, just looked at your chart and asked questions.  You could tell when you were finished because he just stopped talking to you.  Still, he was the guardian of the exit door so I played my role.

“You seem to be making some good progress, Tim.”

“Thank you.  I’m working hard on my wellness.”

“How’s your appetite?”  He flipped a page on my chart.

“Good.  I ate so much last night I wasn’t even hungry this morning.”  I could play this fucking game.

“How are your meds?”

“I think they’re really helping.  I have a much more positive outlook.”  I knew anti-depressants did not start working within a few days, but I was happy to let him think I felt a placebo effect.

“Do you think you’re ready to go home?”

That was a tricky question.  The answer had to be considered and thoughtful.  Too eager and they believed you hadn’t learned anything; too reluctant and they were worried you’d fuck up their success rate if they let you out.

“Well, sir, I think I’ve gained the coping tools necessary for my ongoing wellbeing.”  Adding the “sir” might have been too much since I’d called him a fucktard my first day there.  That was when I’d learned it wasn’t just seventy two hours they could hold me.  After that, it was up to a probate judge, when I could get on his docket, to decide if I could leave.  In the absence of information, the probate judge listened to the psychiatrist who could just say it was his professional opinion that I remained a danger to myself.  So, I signed a voluntary consent form meaning I was willingly checking in and waiving my rights.  My departure was entirely at the psych’s discretion, and he enjoyed that.  Like I said, fucktard.

“What assurance do we have that you won’t be back here?”

“Well, to be honest, I don’t ever want to be in this place again.”  That was truthful.

He actually looked up at me; peering over the tops of his square framed glasses.  I was being assessed.  I tried to decide if eye contact was appropriate or a sign of aggression.  Instead,  I looked down at the grey linoleum floor, my pale blue slipper socks and the fraying hem of my hospital gown.  Eight days in that gown.  He lifted the phone receiver and said, “Tim is being discharged.”

Like I said, it was a truthful answer.  The more complete answer was that next time I’d be more successful.