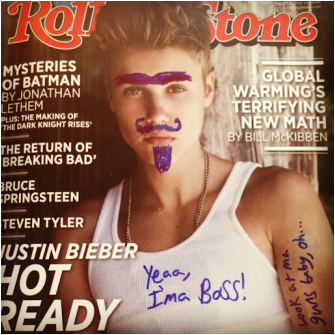 So Doby was drawing mustaches on all the covers of Selantro’s magazines and Selantro demanded an explanation.

“I demand an explanation, Doby.”

“For what?” Doby said, pen scratching up and down.

“For drawing mustaches on all the covers of my magazines.  Mine, Selantro.”

“I know whose they are.”

“Because they are mine.”

“You make me so tired, Selantro.”

“Hm,” Selantro said, hm-ing to himself.  “I think you’re changing the subject.”

“What subject?” Doby said, pen scratching up and down.

“I think you’re trying to steer the conversation away from the topic at hand.”

“I’m not steering anything.”

“That’s right!  You’re not steering!  You’re drawing!  Drawing mustaches on all the covers of my magazines!”  Selantro pointed fiercely.  “That’s the subject!  That’s the topic at hand! The defacement of my magazines!  I demand an explanation! I, Selantro, demand it!”

“Tired of me but not tired of drawing mustaches on all the covers of my magazines, I see.”

“You wish I would what?” Doby said, pen scratching up and down.

“I wish you would not draw a mustache at all.”

“Why do you draw mustaches on the covers of all my magazines?”

“Why not?”  Doby said, pen scratching up and down.

Selantro crossed his arms and looked down, watching the pen scratch up and down, up and down.  “What type of mustache is it then?  If you are going to draw them I might as well know.”

“What kind of mustache do you think it is?”  Doby pushed a magazine towards Selantro.  “The answer says a lot about you.”

“It really doesn’t take up much space at all.”

“It is vertical,”  Selantro said, counting the mustache’s attributes on his fingers. “Residing at the center of the lip.  Very dark.  Shaved on both sides.  It is not dissimilar to a toothbrush.”

“Yes.  I would say it looks like a toothbrush,”  Selantro paused, watching Doby.  “Hm,” Selantro hm-ed.  “There is a look on your face I do not like, Doby.”

“What kind of look is on my face?”  Doby leaned forward.  “The answer says a lot about you.”

“Well,” Selantro coughed.  “It is expectant.”

“Yes.  As if perhaps I have said something unwise.”

“What are you doing?”

Selantro jumped, startled out of his thoughts.  “Huh?”

Selantro blinked.  “Yes.  That’s what I was going to say.”

“I am not!  It’s obviously Hitl-- Charlie Chaplin!  Obviously.”

“Charlie Chaplin had a hat.”

“Well,”  Selantro paused.  “I believe there was most likely a disparity in their personal ideologies.”

“Mmhm,”  Doby said, pen scratching up and down.

“What’s that supposed to mean?”

“You weren’t going to say Charlie Chaplin no matter what and you know it.”

“You’re a liar who thinks we’re all fools.”

“You can say that again.”

Doby smiled, pen scratching up and down.