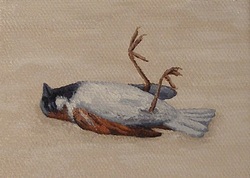 _  First it was a single sparrow, small and gray, scavenging for muffin crumbs littered about the wrought-iron tables and chairs outside the coffee shop where – now that spring had come – she sat every morning filling in the crossword from the newspaper until her hand bruised black from the newsprint. She worked languidly, sipping hot coffee until it turned cold and tiny grounds settled into the unreachable spots in her mouth like burrowing fleas, whiling away the morning hours oblivious to the traffic of life around her, until she killed the sparrow. She stepped down on it after she’d drunk the last of her coffee and deduced the crossword’s final clue. Though she quickly recoiled at the brief manic flutter underfoot, it took only that sudden instant of her weight to kill the bird dead on the sidewalk.

Shortly after the sparrow came the pigeons. Afternoons she would bike through the park for a bit of exercise. She exerted herself just enough to feel vigorous, and as her muscles worked her mind wandered. She made a list of vegetables and fruits and herbs she would grow once she razed the bramble and thickets choking the small square of earth behind her bungalow. Years before, when her son was still around and not yet a world away in Alaska, he would help her tend the yard into a fecund patch of vibrant flowers and thorny bushes and tomato plants clinging to their circular metal skeletons. Often she thought of resurrecting the garden, and though she was getting older, she still felt strong and was as active now as she was twenty years ago in her 40s. And as her mind meandered from ripe zucchinis and full rosemary bushes to the happiness of her son piloting bush planes for tourists so far from her, a child’s errant soccer ball narrowly missed her and she crashed to the ground, just off the asphalt bike path near a park bench where a handful of pigeons pecked and strutted. Despite the discombobulating fall, she was able to pull herself up without injury. When she looked down on the bike, two pigeons lay crushed underneath, one eviscerated by the downward pedal, the other motionless and peaceful, wings slightly spread, pinned beneath the spokes of the rear wheel.

Next, things began to get strange. One afternoon she was walking to the post office to mail a birthday card to her sister-in-law (the sister of her husband who had died the previous winter) when a robin fell from the sky directly onto the sidewalk in front of her. She mistook the bird’s corpse for a sock or some other bit of laundry someone had tossed at her before she realized what it was. Do birds simply die mid-flight? she thought. Had there been a burst of violence in its breast that ruined the integrity of the bird’s rapidly beating heart? Or perhaps it was some bird epidemic like she’d read about happening in Arkansas and other distant states along the Mississippi flyway. She paused and closed her eyes for a brief somber moment, then continued on her way.

At least once a day she’d hear a thud snap through her house, loud enough to be heard over the talk radio that she always tuned into (a habit she’d picked up from her husband) while reading or cleaning or writing letters to various friends and family. And at least once a day she’d go outside to investigate the sound and discover a blue jay or wren or tit of some sort had done itself in by flying headlong into one of her large, clean, fatal windows. One particularly hot afternoon she walked to the end of her short driveway to check the mail, and sitting atop a gas bill and a card from her son (but obviously written in his girlfriend’s handwriting) was a sturdy nest just small enough to fit inside the mailbox. She pulled out the nest; it held three sets of tiny bones set firmly in the nest like fossils in bedrock.

She was not frightened, not exactly, but she was curious as to the reason for all these dead birds. She had always been a person who sought reason, but she was wise enough to know that the desire for reason was not enough if reason did not exist. To try to force one would only simplify that which was too complicated to comprehend (or, conversely, complicate that which was so simple it was wholly overlooked). And so instead of being fearful of or avoiding the birds in her world, she went about her days without deviation. Though she did assume a heightened awareness of these creatures that seemed so mortally connected to her.

Unexplainable bird-related phenomena crowded her days and grew stranger. One Sunday morning as she pulled on her floral print church dress she’d had for over a decade, a bouquet of peacock feathers bloomed in each hand as she pushed her arms through the sleeves. Another morning, on her walk to the post office with a handful of letters and cards, she took reprieve at a bus stop bench and removed her left shoe to free a pebble stabbing the instep of her sole. When she shook the upturned shoe, a small blue egg tumbled out and cracked on the sidewalk. A wet stain darkened the grey concrete around the delicate shell like a flower opening up toward the morning sun. She put her shoe back on and walked on, noting that the stabbing pain was gone.

She was alone. She had been clearing the overgrowth in her backyard all afternoon and was resting on a patio chair long faded as sunset colored things overhead. She sat in silence, enjoying the peace of her solitude, when the bird began chirping. It was a shrill, desperate chirping, and it grew louder so as to demand her attention. She scanned the yard and the trees until she spotted it, high up in the old sycamore tree at the back corner of the yard. The chirping grew more cacophonous amid the symphony of early evening, and she knew the bird must be hurt. She dragged her husband’s old gutter-cleaning ladder from the garage and leaned it against the sycamore to get a closer look. She reached the top of the ladder, but the bird was still too high, and so she began to climb the tree. When finally she reached the bird, squatting and screeching on a high frail branch, she could see its wing was injured, and it could not fly.

She reached out to it, and the bird went silent and hopped over to find purchase on her extended fingers. It turned its head from side to side, taking her in one eye at a time. Its trembling body became still; her presence somehow calmed the bird. Slowly she brought the bird closer to her, examining the creature. There was a long sliver of wood that stabbed through one of its wings and into its breast. She steadied her weight against the trunk and carefully reached her other hand out to the bird, and gently she pulled the long splinter free. Then she brought the bird to her face and kissed the spot of the injury as a mother would her child. When she moved her hand away from her kiss, the bird abruptly flitted from its perch and flew away, causing her to flinch and lose her balance. As she fell, it was as if the branches of the sycamore opened for her letting her fall freely, and though her descent lasted only a few brief moments, she felt that at one point she ceased to fall toward the ground and instead began to rise skyward, as if she were flying. But the sensation was momentary. She hit the ground, and a sudden explosion of soft white feathers filled her backyard like a thick fog in a dream.