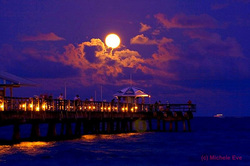 Grunting with steak knife slicing through fajita smoke, stabbing the waiter’s thigh, the patron collapses on sun-soaked plywood, falling into epileptic seizure as vibrations rattle hand-blown margarita mugs and silverware as other tables draw breath. Fishermen stand as women gasp while sun-burnt children wearing lobster bibs hold their lips, fingers coagulated with roasted garlic butter. American cockroaches use this moment to make love in warm wet shadows--though this restaurant is clean--and busy besides--and all seven waiters tend to the gentleman as his convulsions dissipate, and a decadent yacht settles into the marina in the deeper waters by the mountain. The portly manager puts down his cabernet sauvignon where he was watching the elegant vessel maneuver through the viscous crimson liquid like a spy glass, one eye above the surface, one below to watch the real currents. An aspiring pirate stumbles over to comfort the southerner who was all smiles when he entered twenty minutes prior. The vultures who peddle drugs and their contemporaries even worse--the timeshare salesmen--offer their assistance--with shark eyes and voices which resemble pelicans falling from the sky or else the sounds of three-hundred pound hooked-mouthed swordfishes struggling for that last moment of freedom on a bloody bow, being beaten with rubber baseball bats for the bemusement of drunken tourists. This is how food gets on these thatched tables. You catch it; we cook it.

The Baja Pygmy Owls nesting above the palapa are driven from their barbed wire perch by the cries of the patron as he rips the festive tablecloth with trembling fist. As sudden as it begins, it ends; the children fill their cheeks with corn on the cob and lobster tails. The fishermen order another bucket of Pacifico and the manager guides the man toward a taxi and the situation digests itself. The festive enthusiasm of the blender and soccer commentators speaking Spanish on television hook the audience away from this spectacle, which within an hour, has become nothing more than mirage, a memory only the sober will remember. The waiters are the first who would ordinarily forget, and indeed they have.

Seven hours later the tourist stumbles toward the accident scene--though the tables have been carried and stacked behind the kitchen an hour earlier. The tourist stands in the corner, the side of his face illuminated by reflections of moon carved from ripples borne by the Pacific as it musters into the marina. The fishermen are in a dirty cantina where whores wait for bait; the manager is at Mermaids watching naked ladies dancing amid cigarette smoke beneath burning bourbon spotlight, strobe light bouncing against well-oiled limbs; tourists are relaxing poolside in fancy resorts or dancing in nightclubs owned by washed-up rock singers; the timeshare salesmen are counting pesos and practicing ambitious spiels in front of mirrors strewn with cocaine. Only drug dealers are around. The young waiter watches as they march up to the man and offer a trip to the moon.

Nobody is concerned that Mexico has never put a man on the moon. If you talk to the most loquacious dealers dressed in white--those artificial astronauts bathed in sunlight or moonshine--they will swear they have seen thousands of Gringos being rocketed to the only natural satellite of earth; their pockets hold enough propellant to kill an elephant. They are the last resort for a wealthy Australopithecus with no memory, and this one, standing at the table as if preparing to stab his flag onto a new frontier, cannot remember his name or where he is staying. He is never getting home again. The dealers can see the launch pad. They lick the cracks in the vermillion borders of the corners of their lips as the man stares blankly through bloodshot eyes which smell of fresh money as plainly as a fish smells of the sea.

The Catch of the Day is not on the menu. By the time the restaurant is closed and abandoned, the man is a silhouette on the marina, guided by the unfamiliar shadows of the dregs of any decent resort town.

The waiter washes himself and falls asleep, but dreams of this strange man, and when he wakes, the face of the Gringo is embedded on his conscience. Breakfast rush leaves everybody sweaty; the manager sits at the table next to the ladies’ room where the misting fan from the kitchen hits him like a cool feather on the face as he sips coffee with a  triple shot of Don Julio. The manager always uses the wine glasses; rocket fuel of his esophagus as he waits for eggs ranchero. The palm fronds are idle. The rush continues, tables turn, servers spin on blistered tips of cracked toenails full of fungus, the aroma of the kitchen is a kidnapped farm child a thousand miles from home. The visceral stench more pure that that which lies between bikinis, butt cheeks, burnt breasts, brunch and beers, hotel bed sheets, and the giggles of individuals who have lost themselves in the abyss of paradisiacal consumerism.

The afternoon rush merges with the first wave of receding bellies. The fishermen belch belligerent as they arrive with the morning catch: Dorado and blue marlin. The tips are good--these tourists have money--and as the waiter collects monedas he forgets about the man from yesterday. The billetes dampen in his pockets. His brother had his testes and penis severed before being decapitated in an abandoned farmhouse twenty miles southeast of Cuernavaca. Baja brought the promise of something safer, something where neighborshelp one another and balaceras only occur in telenovelas. It was a balecera, a good old-fashioned Mexican gunfight.

“Que lastima hermano, que lastima.” The waiter watches as margaritas are poured into mugs with blue rims covered with salt, the frozen steam so inviting as it rises toward the brightest stars. The waiter places the curly straws and loses himself in his art for two hours, an ant marching to satisfy the queen, until things finally settle and wiping his forehead with wet black apron, the patron from yesterday returns, covered in dirt, nose bloodied. The man sits at his usual table. The waiter approaches, but the gentleman does not notice the server, merely focuses on the mural on the wall. The manager approaches with the swagger of an inebriated moose stuck in an apple tree. Indeed, there is cinnamon on the manager’s lips as he sits across from the man and demands Agua from the bar with a dirty unkempt fingernail that was digging inside his left nostril less than twenty seconds earlier. The waiter can see something blackened bluish hanging from the nail; the manager rubs it against the bottom of the table with stoic elegance.

The mural has fourteen eyes, and all focus on the table. The breeze has picked up and the afternoon is consumed by drug dealers, timeshare beasts, ethereal debauchery, and this angelic brain fart full of money wearing the stale clothes of the day before--fresh wounds, amnesia stricken, dehydrated.

The sickness hits the man, and he drops to the plywood, taking down with him the bread dishes and silverware set up for dinner. The staff fears the worst, waits for another seizure. The man shakes off the fall, rises, and sips his water from a wine glass, staring at the manager through the hand-blown window to the world. The manager wonders whether to call an ambulance but before long the benevolent drug dealers return and offer another trip to the moon. The manager watches as the astronauts grab the gentleman by his Rolex and usher him down the marina into the breeze toward the launch pad.