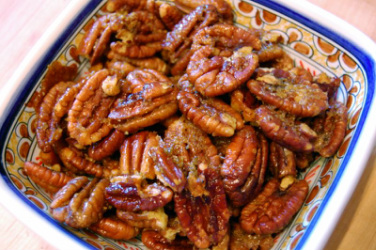 Every Thanksgiving, Butchie sent me pecans in the mail.

Sometimes in the package there’d be an unsigned note on a piece of hastily ripped scrap paper (“make your mother a pie”). But most often there’d just be two large cellophane bags of flawless, luscious, plump pecans, from Butchie’s pecan supplier down south.

Butchie never revealed his exact source, so you had to rely on him to get these outrageous pecans. No matter how hard you tried to pry it out of him, he’d never give you a clue where or how he got them. I tried searching for them on the Internet once, based on the writing on the package, but no luck. The package said Calhoun Pecan Company, South Carolina. Butchie lived in Culpeper, Virginia.

The arrival of the pecans did motivate you to bake something, even though my visits to pots and pans are few. I’d whip up these small phyllo pastry cups (you can buy them frozen at the grocery store) and put butterscotch at the bottom, then a dollop of chocolate, topped by a perfect pecan. Mom loved those once the stroke hit her since she could gobble them in one fell swoop and not have to fumble with a fork (like she had to in order to eat a slice of her beloved pecan pie). She could eat the phyllo cups independent of any help, and maintain some dignity.

But she still yearned for and savored a slice of pecan pie. When, as Butchie instructed, I baked her a pie, I’d try to festoon the pecans on top so they’d be arrayed perfectly, just so. I guess I was still trying to please her after all these years. She’d study the spoonful of pie as I’d steer it to her lips and she’d gulp it down, getting the pie’s gooeyness all over her remaining teeth. Then she’d smile with a dreamy, contented look on her face after a good bite. Well, it wasn’t always a bite, more like a slurp. But she could taste it and that’s all that mattered.

This went on for years. Butchie mailing me those pecans before Turkey Day; me making Mom assorted pecan bakery goods.

Sometimes I confess I’d get panicky if he cut it too close to the holiday, wondering if I’d have enough time to mess up the kitchen, see if the oven still worked after a year of neglect, and bake and wrap everything up for the trip to see Mom.

But Butchie always came through, even if the package he sent the pecans in always looked like it had come from some war zone; it was assembled from remnants of cardboard and tape he must have recycled, long before recycling was in fashion.

So last year, Pete, Butchie’s son, called me in early November to tell me that Butchie had met his usual diner friends for breakfast, played a few holes of golf, and then suddenly taken a turn. All Butchie kept saying in the ambulance was, “Make sure the pecans get out to everybody!” He never made it to the hospital.

Well it was hard on Pete, so sudden and all. But we were grateful Butchie hadn’t suffered and had seen his friends and cherished golf course on his way out.

As Pete relayed to me Butchie’s deathbed pecan delivery concerns, I admit I was surprised at the plural. While I was truly grieving Pete’s sudden loss of Butchie, I was also wondering what the hell was going on. My world was rattled. Turns out there was short list of folks Butchie sent the pecans to all these years. I had always felt extra special getting them and had mixed feelings when I learned from Pete that there were others. On the one hand, wasn’t it so Butchie to make so many people happy and recipients of those beautiful pecans? On the other hand, I realized I wasn’t quite as special as he always made me feel. I had a fleeting, irrational sense that somehow Butchie was cheating on me. I know it sounds crazy, but there it is. He was the father of my dear friend Pete and never had any commitment to me, except in being adorably civil and a southern gentleman whenever we met. And I realize he was that way with everyone, not just me. Being a northeasterner, I found Butchie and his wife Spilly endlessly exotic, with their friendly charm and manners. And Butchie sent me pecans. How charming was that? I assumed he sent them to me because he knew how much my Mom enjoyed them and he knew I was a wonderful daughter who would bake her something. What, I wanted to know, was the story with the others on his pecan list?

Years and years ago, Pete and I used to “socialize,” as Spilly would say. Pete lived on my corner and we worked for many years in the same building. Our paths kept crossing. He had moved to the big city and was enthralled by it. Pete and I made each other laugh and we both had formal, old-fashioned manners. But we led our separate lives. Once in the middle of the night, long before ATMs, Pete politely called and asked if I could give him some cash for an emergency he would not discuss. I gave it to him and he paid me back. It was a “don’t ask, don’t tell” friendship. He paraded me out at the holidays when Spilly and Butchie would visit. Spilly always told me I was “refreshing.” It’s possible Butchie and Spilly may have hoped our friendship would turn into something a bit more.

Now Spilly’s gone and so is Mom. So when Pete called to let me know about Butchie it seemed the end of some kind of era. I suppose it was. A little part of me, in addition to feeling sad and missing Butchie, had to admit I’d also sure miss those pecans. And wouldn’t you know poor Butchie up and left us in November, right before the holiday.

But, we carry on.

A week or so after Pete’s call, right before Thanksgiving, I trudged home from work feeling a bit blue facing another holiday without Mom. My building’s window arches were draped with what looked like snowy eyebrows, where an early snow had collected. My doorman handed me a nicely assembled package. I wondered: Had I ordered something? Sometimes I do off the Internet. It’s a pleasant end to a tedious workday to come home and find something and be surprised (since I forget about whatever I order as soon as I click and submit).

I pulled out my scissors and opened the box. And there they were: the customary pre-Thanksgiving two bags of pecans. I must admit I got a chill. Butchie was dead. How in the world had this happened? The package was so neat it didn’t occur to me it could have pecans in it, even though I should have figured it out by the familiar sound of nuts bumping against each other, like a chummy hiss.

Turns out Pete found the short list of pecan receivers and, since Butchie had made all the arrangements before he died, Pete went ahead and sent them out to all of us. I heard later from Pete that some on the list found it a bit ghoulish. But I was touched to get them; it was a second chance with Butchie and, after all, he had gone to the trouble to arrange everything and wanted us ALL to enjoy them (including my pecan competition, whomever they were).

But enjoyment wasn’t my first reaction to the surprise pecans. I got teary realizing with finality that it was the last batch I would ever get from Butchie.

Pete no longer lives on the corner. He moved out of state long ago. This year, he came to see me before Christmas and we had a holiday lunch. He seemed grayer, and had a blocky sadness about him. He understandably missed Butchie; he used to call him twice a day and said Butchie was his father and his best friend. We ordered drinks and toasted Butchie with real cocktails instead of wine. Neither one of us ordered dessert, steering clear of the pecan pie on the menu. It was just too much to go there. We promised to get together more often in the New Year, as people do. Who knows if we will?

I still have Butchie’s last bags of pecans. Right after I got them, I put the bags in the freezer where they remain to this day. I know Butchie would prefer I eat them or bake them for somebody to enjoy. But I just can’t bear to part with them and besides I don’t really have anyone to bake for anymore. Although maybe I can bake a little something for Pete sometime?

But for now, every time I crack open the ice tray, I look at the pecans stuffed into my tiny freezer and think of Butchie. It’s a comfort really, to have them in there.

I wonder: Did the others on his pecan short list bake them all up? Or am I the only one to hang onto Butchie’s pecans?

Does that make me special?