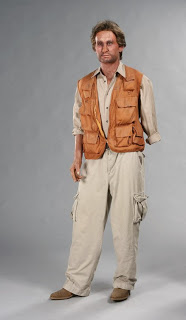 Pastor Eric’s coming in a couple of hours to load my mother-in-law’s boxes into the church van. Eight weeks ago she passed away and speeding home from the bar to comfort my wife that night, I flipped my truck, crushing my arm between it and a tree. My guess is I suffered from a certain someone’s dying wish. They had to amputate.

Today Jill wears make-up and a dress that matures her. In closets and drawers she shoves knick-knacks that I’ll never have the patience to find again. Why she needs to impress that woman of a man Pastor Eric, I don’t know.

Rushing, she places bacon and eggs in front of me along with a knife and fork. Out of habit, I pick up the knife in my right hand, and when I go to take the fork with my left, the arm isn’t there. Jill watches as I pause, my lips disappearing against each other.

“I’m sorry,” she says. “I just—forgot.” My arm, or lack thereof, still surprises us daily.

“It’s ok,” I say, putting the knife down. She stares at the silverware and rocks back and forth on her heels. She wipes her glazed, unfocused eyes, a sight I’ve caused too many times.

“Don’t worry,” I say. “Nothing needs to be cut.” To show her, I slice the eggs with the side of my fork, then rest it on the plate. With my fingers I pop a piece of bacon into my mouth.

“It’s not about you,” she says, her arms crossed, palms massaging opposite shoulders.

“Well, in any case, I’m fine, honey,” I say, lying, feeling the weight of my heavy void.

She grabs the coffee cup that I’ve been working on for hours, bringing it to her lips. Instead of taking a sip, she smells it and sets it back on the table.

“I’m not stupid,” I say “How many limbs must a man lose before he learns?”

“Pastor Eric mentioned a meeting at the church,” she says.

But to be honest, I have thought about trading more appendages for another drink.

“He just thought it might be good.” She shrugs and walks out of the room.

The way she talks about that man, I would think he was Jesus. H. Christ.

After breakfast, my wife waits on the couch with her knitting. Around her neck hangs the scarf she’s making even though it’s summer. Her long blond hair almost reaches the tips of the needles.  I water her plants around the living room.

“Why are you doing that?” she asks.

“Huh,” she says. “After eight years.” The last part she whispers under her breath so I ignore it. I haven’t proven I’m a new man yet even though I look like one. Underneath my shirt, scars dash across my chest. A bruise yellows on my forehead. And, of course, there’s the vacancy beneath my shoulder making me a motel that will never fill.

The hospital stay sobered me. It felt like crawling out from a dark cave I’d hidden inside for years. The fresh air still frightens me a bit. My eyes have yet to adjust to the light.

A stack of boxes blocks the last begonia. With my leg I nudge the stack inch by inch, steadying the top box with my elbow, refusing to put down the watering can.  My wife leaps up to help, limber with lingering youth. I think, She’s still young enough, if she wanted to. Then I watch tension attack her shoulders as she picks up each box and replaces them near the door. And I think, Maybe a baby would be just another burden for her to bear.

She settles back onto the couch and takes up her knitting. On the side table lies a newspaper. I select a small section because I can’t manage the whole thing with one arm. I barely could with two. It bothers me, the precarious construction of newspapers, always has.

A couple years into our marriage, my mother-in-law visited for a week. One night I came home late and danced my way out of trouble like usual. At that point, drink seemed more of a youthful indulgence than a malevolent mistress. I dipped my wife just as her mother, a hunched swollen version of her daughter, shuffled into the kitchen. We almost knocked her over.

“All your giggling down here woke me up.”

“Come on, Mom,” I said, twirling my wife until she begged me to stop. “This is why she married me!”

“She married you because she’s young and you’re handsome.” Her teeth looked sharp. “And stupidly I taught her to follow her heart.”

“Mama.” My wife relaxed into a chair, pulling her hair back. They shared a stare at each other, and in the silence I could still tell they were talking about me, in some way.

“Life’s not always fun and games,” my mother-in-law said as I took her hands in mine and trotted to my internal beat. I spun her and spun her until everyone was as dizzy as me. “A good dancer does not necessary make a good husband.”

My wife looks at the clock, pads to the kitchen and returns, placing a plate of cheese and a pitcher of lemonade on the coffee table. I reach for it.

She swats my hand. “For Pastor Eric.”

“Have you forgotten I’m missing an arm?” I say.

“No, and I haven’t forgotten how you lost it, either.” She returns next to me on the couch.

Right as I finish reading a few pages, the gravel in our driveway rumbles like rushing water. My wife sets the knitting onto her lap and stares straight ahead. Her hands quiver.

“Honey,” I say, but her eyes jump from box to box.

“Honey,” I say again. This time she places her hand on the couch where she thinks mine will be, where I think mine will be, but it’s not. I guess she’s doomed to never have all of me. A muscle rattles in my jaw.

We listen to a door slam shut and another roll open before we stand up. Through the window I see Pastor Eric’s lower half stepping down the open side of the van, his upper half hidden inside. He has wide hips like a woman and when he brings his head back into the light, his white dandelion hair looks like it could blow away in the breeze.

My wife has started outside already. She holds down the skirt of her dress as wind sprints in from the west. She and the pastor wrap their arms around each other tightly, but neither shows strain. They look weightless, like they’re about to float off into heaven.

Grinding my teeth, I slide my hand under the top box near the entryway, lift it and lean it against my chest. It’s easier than I thought. As I walk out the door, Pastor Eric hurries toward me.

“Here, let me take that,” he says, sanctimoniously, pawing at the cardboard.

“No, I have it.” I twist my back to him and the momentum takes the box and it tumbles to the ground. The flaps burst open and my mother-in-law’s nightgowns litter the lawn.

“Oh dear,” he says, shielding me from the mess with outstretched arms. “I’ll get everything.”

At any time prior to the accident, I would have grabbed him by his collar. But my wife looks on from the van where she’s negotiating space for her mother’s things. During her mother’s illness, I stayed late at the bars, seeing Jill only after midnight, asleep on the couch. Pastor Eric has been there for her when I haven’t. So I walk inside.

In the second bedroom, two bottles of whiskey hide under blankets in the bottom drawer of the dresser. The blankets smell like winter and the fabric catches on the cracked skin of my hand. I put the whiskey here years ago, right before my mother-in-law became sick, when my wife had grown too jealous of the bars and swore to leave me.  She said that this far into a marriage she should have a baby to care for, not a buffoon.

I pinch the neck of one bottle between my thumb and forefinger, the other squeezed between my third and fourth. They weigh more than I remember. The floors groan under my heavy boots as I snake through the house to the outside. Both Pastor Eric and my wife face me and I wish they would look surprised that I’m carrying booze, but they don’t.

“Can you find use for these?” I ask the pastor.

He squints, then shades his eyes with his hand. “I’ll find something.”

My wife nestles the bottles into one of the boxes of clothes.  I’m wondering if I could take them back when she presses herself against me, stealing my attention with her beating heart.

“Hidden blessings,” Pastor Eric says, watching us. But he can’t tell that everything’s ruined. I can’t dip her anymore or move boxes or hug her like I’m carrying us to heaven and I’m not sure I would trust myself to hold a child either.

“Hidden blessings,” my wife says. And it’s more than I can bear.

From inside I watch them finish. Jill stops Pastor Eric from closing the door of the van so she can scan its contents. Her head drops. His arms curl around her again.

After Pastor Eric leaves, my wife walks back inside, her shoulders crunched to her ears like something in her is rising.

She goes upstairs, closing our bedroom door. I’m scared to follow her. I know the worst is waiting for me to fail again.

I take off my boots. My socks slip a little on the steps. On the bed my wife lays with her face in a pillow, her arms tucked underneath her.

When I get under the blankets, she turns her head toward the door.  I can’t see it, but I know she’s crying. There’s a second when I think I can smell tears.

“Tell me a story,” she says. Her voice hides behind her words.

I’m silent for a moment. My tales used to come out raucous and ribald, but I can’t find anything funny to say.

“There lives a man and his beautiful wife,” I say. “The man loses his arm in an accident that he probably deserved. At home his lovely wife lies in bed next to him and asks how he feels. He says ‘I feel new and broken.’ Sometimes he forgets his arm is missing, or he knows it’s missing but feels like it’s there. He had navigated all his life with that arm. It had allowed him so many things and the man had relied on it, taken it for granted. He almost wishes he could have thanked it.”

The bed bounces a little as my wife’s shoulders shake.

“He was a man who took many things for granted, especially his wife.” My eyes fill. “I love you,” I say, hoping words will make me whole.

She sniffs. Her voice comes out creaky with fitful volume. It sounds like a door is opening and closing in front of her mouth.  She says, “That’s exactly how I feel about my mother.”

She turns to face me. Down her cheeks, wet streaks glisten in the sun from the window. She thumbs the tears hanging on my eyes like she’s putting out tiny fires. I roll over to take her in my arms but before I know it, I’m crushing my good arm underneath me and reaching to her with nothing at all.