Without the China
Melodie Corrigall 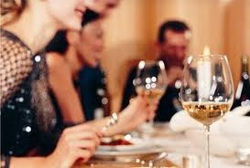 The hostess has gone upstairs. No one is surprised.   No one seems disturbed except the new friend wedged uncomfortably in the corner.  Two of the men quarrel amiably about the party leader.  He is too radical; he has no principles.  They enjoy the joust: friends in their clothes, warm together.  "Remember the time Amy and Howard got into the argument at the head table?"  "Read us the farmer speech from Hansard."  "Several honourable members, 'oh, oh.'’'

The woman glances up at the stairwell. Minutes earlier, caped in a soft excuse, the hostess—still  young, attractive, serene in laughter—smiled an apology, "teaching tomorrow," and slipped up the stairs.

Familiar voices wished her an affectionate good night, thanked her for the supper, as always delicious, and well received. Everyone admires her ability to break from the festivities early, comments how conscientious she is.  They are not ready to step back into plans for tomorrow.  All now too cozy, drifted too far from the shore of black-and-white corners to want to leave the warmth, break out the door into the cold, sharp night, juggling their ways home, up the stairs, sort through the junk mail with hopes for a letter or card, lights off, to bed.  Friends now only memories, eyes burning, suddenly exhausted, bones crying old man, old woman. But that is later, now they are still young, lively, around and around the carousel, laughing.

The woman lifts her eyebrows, turns her head to be part of the group, still uncertain of her lines, her entrances forced and hesitant.  She does not know the language; she is no academic.  Every book is an effort, every opinion cradled in the conditional, ideas premature; she, an expectant mother fearful of a distorted birth.

Across the room a pale blond woman, an artist already heady anticipating her future success, glances in her direction and smiles. Her eyes call the younger woman into the circle. The novice smiles back. The music continues, drinks are passed around, jokes trickle out, gurgling over the familiar pebbles; the crackle of warm times past and familiar together futures.

The cornered woman, delaying a move, but now after many glasses of wine needing to relieve her bladder, rises cautiously, slips into the hall and up the stairs.  There from above she hears the murmurs, bubbling along the rock bottom, fast-moving, clear stream.

The bathroom light beckons.  Ellen darts through the door and clicks it shut behind her.  Now alone, she sees her startled face leap from the mirror, her eyes disheveled creatures in an ordered world.

Like the rest of the house, like the rest of the drama, everything in the bathroom is coordinated. Rigid guest towels immaculate as Mounties on parade line up along the chrome rack. Near the sink an official proclamation declaring the hostess a member of the "Flat Earth Society." Copies of This Magazine and Ad Busters rest on the back of the toilet seat.

Father and mother bear have big toothbrushes, standing alert in the container; baby's brush, still pasty with blue cleaner lies abandoned behind the taps.  Ellen quickly relieves herself, and stares again in the mirror expectantly.  No change, still just old Ellen, small hopeful face, wry smile, brown curls flung around her forehead.  She pushes impatiently at her untidy hair, glancing for a brush; there is none. Ah well, among friends, she shrugs.

As she creeps from the bright room, a voice calls from across the hall. "Ellen, is that you?"

It's the hostess, Margaret. Already in bed, somewhere hidden in the dark cave, and waiting.  Did she wake her? It is difficult to imagine Margaret in bed, vulnerable in the darkness of the dream country, the unconscious.  Everything in the woman's world, her house, her family, seems so alert, so ordered, so as it should be in the smoothness of the river.

Ellen moves to the door, and creaks it open hesitantly, expecting what?  She does not know. Unsure now how to enter this room, she slips a hopeful smile, hesitates.

"No," the woman shrugs rising and pulling a crocheted shawl around her thin shoulders. Now Ellen can see the face, so serene, so well proportioned, wet with tears.  The bedded woman laughs. "Excuse me," brushing her eyes, "I guess I must get used to it." Something is wrong. Is the boy ill?  Has there been trouble with the new book? What could be so serious as to bring Margaret to tears?

The visitor knows she must ask.  Sitting on the smallest corner of the bed she whispers, "Is something wrong?"

And yes there is, didn't she know? Everyone did, Margaret thought.  It was all over, she and Bruce. They can't go on.  All over?  But surely there must be a mistake.  A misunderstanding.  No, no.  Impatient now, frustrated over this discussion, public at last but so long private. So many nights wrestling between go and endure. Forget Bruce, with him there is no longer any interest.  It is her son Ben who she is worried about, what should she do?  How could she take the boy from his father?

"But you seem so happy," blurted out awkwardly, persistent still, the confused young woman seeing the envied couple, he with his arm around his wife's waist, she smiling at his stories, he bragging about her new book.  "You seem so happy," she insists, as if they had tricked her.

"Well there is no violence," the woman smiles ruefully. "We are friends. I like Bruce. But that's it.  Nothing else. He wanted a child, insisted we have one. Now I'm saddled with the responsibility. Bruce is 'bounce the baby on the knee, sing a song at bedtime.' I'm leaving. It's all decided."

Leaving after how many years? Fifteen.

This had been no casual affair, the story unfolds: the white dress sewn from her grandmother's, the handing over father to husband in the loftiest Anglican church in town, the list of invited guests that sounded like a Who's Who.  No indeed, no ordinary affair, a grand affair.  She the only daughter, her father a Colonel. "We did everything right," the wife smiles apologetically as if the ceremony not the choice of spouse had been the mistake.

Ellen touched the woman's arm, soft fuzz in the summer evening, frightened at the vulnerable skin.

They talk quietly. Below the music, bursts of laughter, life continues.  "Go downstairs; I don't want to spoil your evening." Pushed reluctantly back to the movement, Ellen withdraws, slowly descending the stairs, her heavy legs now uncertain of the steps. In the hall hidden by the shadows, she watches the room, the players all in gold and silver. There is the husband, now of clay. "We haven't made love in three years.  I'm lonely, dying."

Ellen slips into the room, sighting the corner armchair, a safe harbour, she sails to it hopefully. "Where were you so long?" the host asks, and interested eyes turn toward her. The woman shrugs, smiles, and avoids an answer. The friends turn back to their conversation; all is easy here. Time winds down now, the minutes slowing, until finally one makes a move, another confirms the evening must end.  The guests trail out onto the street, calling back promises of visits. The upstairs bedroom window, thin drapes trembling in the evening breeze, are dark. Ellen glances up hearing the whispered cries, waits for an appearance. There is none.

"Come along, Ellen, the taxi is leaving," the tall man jokes. "Do you want to come to the deli for a corned beef sandwich? I'll drop you off later."

Not ready to fall back into her single reality, she agrees and moves with the crowd, now only six slow-moving souls, a fuzzy creature centipeding into the bright, late-night room. The waiter, cocky and loud, calls out the order.  All the same, corned beef, coffee. Ellen's brings the order to six.  What can she say?  "It's the best in town."

The tall man, no, he is more than that, has already taken her out to the theatre, walked slowly home with her, showed an interest in her work, in her life.  This tall man, thinning hair, kind smile, is watching her.  "Didn't you enjoy yourself?" he asks taking her hand, examining its bird-thin veins. Gently, curious.

It is too early in the relationship; she is too new a member to say "no." And she cannot in truth say "no."  She liked them, liked to be with them, move with them. They are bright, fun, speak kindly to one another, and delight in music and picnics. They know how to do things, how to live with ease, what to wear. They are intelligent, witty, prepared for the future.

"Well didn't you?" he asks kindly, searching for a sign behind the dark, deep-set eyes. She smiles encouragingly.

"It's always fun to be with Bruce and Margaret," the artist beams.

"They make you feel welcome."

"Bruce is hilarious when he does his imitation of the Prime Minister."

"I hear Margaret's book is going to be a banger, the guy from The Globe is doing the dusk jacket."

"Is a 'banger' good or bad?" someone asks from the end of the table.

"I thought it was a sausage with bread instead of meat," a voice pipes up.

The tall man watches the woman, curious about what she is thinking.  Her stillness makes him think of a lagoon, silent, black, mysterious.  He wonders if he dares venture closer; whether she will wait.

He walks her home, hesitates at the door; they do not spend the night together, yet.  And there are other parties, all together.  The two circle around one another, the steps hesitant and the heads light.  Then finally, an announcement.  Not about them, not a joining.

"Bruce and Margaret? You've got to be kidding."

"I never noticed; they seemed so happy."

Friends are divided; attempts are made to retain alliances. Ellen and the tall one, she calls him Peter, dance slowly, hesitantly-of evenings, of parties, of laughter, and the jokes. Waiting to see, without the china, without the invitations, without the passing over from father to husband.  The two of them, knowing history, moving cautiously, waiting hopefully to hear the catch.


Previously printed in The Dalhousie Review (2007).