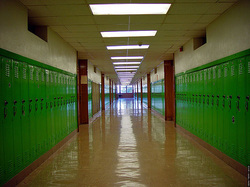 My first teaching job was in an inner-city high school on Phoenix’s Westside.  The wide trophy case and inspirational posters in the lobby suggested a place of education, but moving down the narrow, poorly-lit hallways and into the classrooms, another reality materialized.  Graffiti sullied the walls, desktops, and chairs.  Rotten ceiling tiles collapsed onto desks and tepid air fumed from vents into hot classrooms.  Anything new quickly fell into disrepair or simply disappeared.

There was little teaching.  My students couldn’t care less about education.  They wandered the hallways, bursting into classrooms in paroxysms of shouts and giggles, mid-lecture, mid-test, like performers mounting a stage.  They had probation officers, wore ankle monitors, got out of school early once a week to go piss in a cup.  At fifteen or sixteen, some already had one or two kids.  How could I teach them?  Their minds were elsewhere.  They didn’t bring pen and paper.  They showed up high.  They disappeared for days at a time.

After a month, I was tired of that run-down school, tired of these kids’ unabashed laziness and tough-guy apathy.  I wanted out.  I dreamed of teaching in Gilbert or Chandler or east Mesa, at a school with adoring, ambitious students and pristine facilities.

I planned on finishing out the year and then leveraging my time at that low-income school for a better, safer job.  I’d be the guy who’d worked in the trenches, endured the inner-city violence and indifference so many educators avoid.  I believed that would put me heads and shoulders above most applicants.

One Friday in late October, Principal Warner’s bland voice crackled through the school's PA system.  “Teachers, we’re on lockdown,” he said, and he reminded us, as he always did when we went on lockdown, that there were to be no bathroom passes, no vending machines, no one in the halls.  Period.

Outside, it was an oppressive day, the heat rippling on the asphalt and car tops.  My classroom felt equally oppressive, the air heavy and rank with sour armpits and that morning’s weed.  Three or four students worked through a crossword puzzle on the constitutional amendments.  The rest sketched in notebooks or slept.

I sat at my desk and stared out the smudged windows at four Phoenix police officers moving slowly through the parking lot toward the school’s entrance.  One pointed to the dilapidated basketball court, a casual sweep of his arm that took in the peeling bleachers, the cracked and faded lines, and the tattered nets.  He said something and the other three officers laughed.

“You nervous, mister?” a student asked.  Juan Mendoza, I remember, a tiny thing, almost lost in a pair of oversize pants and a red T-shirt that caught him just below the knees.  I suspected he and another student in the class, Hector, might be in some neighborhood gang.  But unlike Hector, who often slept through my class, Juan at least had a spark of life.

“They're not here for me,” I said, listening to the officer’s dense, muted voices somewhere down hallway.  I heard the clop of heavy boots and the jingle of keys.

“You think it’s drugs?” Juan asked.  He held a black permanent marker above an open notebook where a menacing eagle with outstretched wings and long talons floated on the page. “Or what if somebody got a gun?  You know how many kids at this school got guns?”  He sniffed the tip of the marker.  “If you knew, Mister, you be scared shitless.”

He walked to the board and wrote his name in the same sharp script I saw tagged on bathroom stalls and lockers, on overpasses and streets signs, even in the alleyway behind my house where my neighbors and I dumped lawn clippings.

“I got to use the bathroom,” Hector said suddenly from the back of the classroom.  His eyes were red and watery.  He stared at the three blue and white police cruisers in the parking lot, squinting into the bright afternoon light.

I heard the sharp bleat of a metal detector wand in the hallway.  My students began to stir, looking up from their notebooks and assignments, or lifting their heads from grimy desks and blinking sleepy eyes, suddenly interested in what was happening outside the door and in the classroom.

Juan peered through the classroom door’s small observing window.  “I bet someone snitched,” he said.

Hector glared at the class.  “I hate snitches.”

“Yeah, mister, where we’re from you look the other way,” Juan said.  “You mind your own business.”

I felt a tightness in my shoulders, felt a heat sliding up my neck and coloring my cheeks. “So someone’s robbing your neighbor,” I said, “and you don’t call the police?  You don’t do anything?”

The door swung open and Warner walked in.  “Hector,” he said, scanning the faces.  “Hector Valdivia.”  The four police officers stood in the hallway, thumbs looped under their heavy utility belts.

“Motherfucker,” Hector mumbled as he walked to the door.  It closed and then the metal detector wand trilled wildly.

Minutes later I watched the officers walk across the parking lot.  One led Hector by the elbow.  A pair of handcuffs held his hands behind his back.

Juan stood near my desk.  “Never thought he had a gun, did you, Mister?  But I knew.”  He stared at me and smiled.  “If somebody said they’d kill your family if you snitched, you wouldn’t say a word.  It don’t matter where you live or where you from, Mister.”

Suddenly, the small hairs on my neck bristled.  My heart pounded against my shirt.  “Sit down and finish your work,” I said.  I could barely breathe.  “Please sit down.”

I uncapped a pen and pretended to grade a worksheet.  My hand shook.  I looked at the framed photograph on my desk, my wife’s red hair spilling over her shoulders, our smiling son in her arms, his first tooth cutting through the lower gum, and behind them miles and miles of shadowed canyons.

After school, I gave Warner my classroom key and told him I was done.  He understood, shook my hand and wished me success in the future.  I let him believe what he wanted, that if the apathy, disrespect, and dilapidated school weren’t enough to contend with every day, then a gun in the classroom would break anyone.  But it wasn’t the gun.  Looking back from where I teach now, at a high school in Paradise Valley with unblemished white walls and glowing lacquered floors, what I found most disturbing that day was the unvarnished truth Juan spoke.  He was right.  I would do the same.