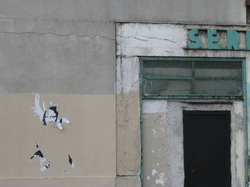 When the step breaks under Clap’s foot, I knew we’re in the right spot. He turns around to see if I heard him yelp and I pretend to stare at the place where the banister used to be.

“Man, he ain’t here man.” It’s the third time I’ve said it. Third time since we opened the door on this shitbox, a one room rat museum nobody’s lived in since I was in middle school.

“Dray!” Clap yells up the stairs. His giant shoulders twisting in the January wind. Clap’s six foot five and darker than midnight on Neptune. If he knocks on your door and asks you where his brother in law is, you’re going to tell him. And somebody told him here.

I move slow behind Clap determined not to trip over the wires or the dirt. When he was a boy his teeth were fucked up, so he learned to never open his mouth. Instead of laughing he would clap and no one could see the cross cut mountains behind his lips. These days though, it ain’t a problem. Nothing’s funny.

“You see that?” At the top of the stairs a radiator has been wedged in between the walls. Calling it a radiator is a lot like calling this hole an apartment. The thing looks like it got set on fire, shot with a hand cannon and then buried in a mass grave. Still, it didn’t get there by itself.

“See man,” I try to keep the hope out of my voice. “That proves he’s not here. Dray would have been taken that thing to the metal man. He ain’t here.”

“Nah, rusted out heat box ain’t worth the backbreak to take to the yard. He’s here. Nigga booby trapped this place. Draymond!” He screams through the shivering. His voice as worn and threadbare as last year’s miracle.

“Dray,” I yell up the steps. Not even an echo comes back.

Outside La La’s waiting in the car. She’s smoking with the windows rolled up wondering why it’s taking us so long to bring her brother back. They live below us in the building we share on Ninth street. The neighborhood they used to call The Pocket. She and Juliana work together at the hospital but today neither one of them’s there. Juliana hasn’t gone in since she lost the baby last week and La La’s been a mess since Clap kicked Dray out the house. Found him nodding next to his rigs on their couch in a lake of his own piss. Clap’s got the empathy God gave to an East Chicago alleycat. Almost broke Dray’s arm whipping him through      the door. But even he’s got a lady to answer to.

“Grab that side,” he tells me. The radiator is colder than rat teeth. All I can smell is the dirt in the air. We heave and turn. The metal splits through my skin. I look down at the gash in my hand. There’s rust in my blood.

“I was talking to the radiator.”  We twist and rock the heater just enough to make a path.

“Hello? Anyone up here? We coming up. We ain’t police. We just looking for-” Clap’s voice falls off a cliff. And then he starts to run.

I see Draymond’s legs through the gut of trash at the plateau. The New Balance sneakers cocked at an impossible angle. Two broke necks peeking out from the corner. Clap blows through the doorless entry. I stay locked at last step. I’ve never seen a dead body before. “Dray!” He’s slamming his brother in law against the wall. I can hear the word “no” and what must be a head bouncing off the floor.

“He ain’t here man,” I don’t want this. I flash flood down the stairs. Past the radiator, past the glass and the busted windows; back to the street, back to air. La La’s sitting on the hood of the Malibu grinding a Newport under heel. The space between us breaks the news for me.

“He dead, huh?” She pushes her chin at the snow on the street.

“It’s happening now.” My brain is skidding in a rainstorm. A week ago La La had said those same words to me. When Juliana had flushed the baby out of herself,  La La had stepped out of the bathroom and told me that exact same thing. “It’s happening now,” she had said. And she let me touch the bloodstain on her knee cap.

“Fuck. Draymond. So stupid. Always was so stubborn weren’t you.” Then she turns back to me. “Well, why you down here then?”

So I turn and go back up the stairs. I remember the half a can of Pepsi, cut open with the char in the bottom. The anonymous dried blood. The spiders biting each other in the linoleum curl. I take my turn trying to pound some life back into Draymond. The bones in his chest, nothing but steel in a sweater.


A few minutes later, we’re outside waiting for the police. The three of us crying in the slush underneath the Mexican gang graffiti and the posters for last year’s concert. An ancient trick in a dirty fur coat  stumbles past. She glances at our huddle then disappears into the pawn shop across the street. When the door closes behind her, I can read the sign out front: We Buy Broken Gold.


The cops that show up are both chalky, red guys with low grade pneumonia. The older one immediately runs into the building like he left his wallet in there. A couple minutes later he comes out talking on his cell phone, flagging down the ambulance. The younger one gets assigned to me and Clap. La La won’t come out of the car.

“Ok. Just level with me, you got any warrants, you good?”

“You sure. Nothing. Didn’t forget a court date or something?”

“Man, all we did was find him.” The sun is gone now. My toes are bleeding from the cold.

“I know you did. Take it easy.” He drums his ribs and gives me an I could but I won’t smile. He turns to Clap.

“So you and your neighbor, you come and find him. How did you know he was here?”

“Yeah, I’ve heard about it too.” He gives a low laugh that makes him seem older. “This is second one of these this week. Old man in the park, had a home and everything. Got confused, laid down on a bench and that was it.” He cuts his neck for emphasis. Clap looks like someone has pulled a fire alarm in his skull.

“What you mean? Draymond overdosed. Ain’t you see that can?”

“Oh I ain’t say your boy wasn’t getting high. If he was coming around here, there’s no doubt. But that’s not what killed him. Five will get you ten, he froze to death.” He dribbles his finger against his name tag. Clap’s pitching his head back like a dragon about to blow smoke. He stomps around in a disbelieving circle.

“Man, look...man. That’s some straight bullshit. Dray had a habit. Bad fucking habit. That’s what killed him. He ain’t...Nah, man.”

“Well, you may be right,” the Cop says evenly. “But, you ain’t.” Steel pistons shoot through Clap’s eyebrows. He looks at me. Fuck that. I’ve helped enough for one day.

“Look, I seen overdoses bro. That was an overdose! I’m from Gary, man. Think that’s the first overdose I’ve ever seen?”

The Cop shrugs. It’s hard to tell if he’s enjoying this. “Gary, huh?” For a second I think he’s going to ask Clap where he went to high school. But instead he just says “no shit.”

“I’m out of here,” I start walking.  I’m six miles from the apartment.

“Where you going man?”

“I got to get home.” I slide my arms inside my hoodie.  I can feel the cop’s eyes trace me before they glide away to count the hours left on his shift. One less fuck he’ll have to give.

I caught my act in the mirror last night. No good. Too much face. Red eyes, jowls hanging loose, yellow teeth. Hairline pretty much saying fuck it. He was my friend, Draymond. Friendly enough, I guess. We got high a couple times together. Him on the pills and me on the rock. One time we even all hung out at the Oak Room downtown. Fancy place, even had a parking garage. Dray spent the whole night making fun of the way the Korean bartender said ‘martini.’

“Hey man,” spilling the words “you got them teenage drink specials?”

“You don’t want mar-teenage,” the Korean dude would laugh “You want beer.” Maybe you had to be there. So, that’s today’s lesson: funny niggas die too.


She left my knife on the dinner table last night. My old buck knife that I kept in my dresser. Two nights ago she found one of my stems. A crack rose that she left in the same place. Juliana’s little way of saying “your secrets are stupid.”  At night she walks around the apartment talking to the furniture. Daytime, she’s in bed, naming the baby over and over again.

“I heard.” I take my boots off. My socks are bloody.

“I don’t hate you,” she says. For a second I remember the way she’d smell just after she came. The way her back would arch like a cat in the rain. I touch her shoulder.

“I wasn’t talking to you.” She flicks my hand away. “You need to brush your teeth, your breath is nasty.”

“Oh yeah?” Both her hands smack my forehead. Two pit bulls charge through my skull.

“You want a problem? You got a problem, you ugly fucking bitch!” In my hands her windpipe feels like wet cement. Her fingers tear through my skin. She pulls my hair. She’s not ugly at all.

It lasts maybe five seconds, the whole thing. We let each other go. The next minute is a shower of hair, screams, clothes, and cracked voices. Then she’s gone. Downstairs to La La’s or to her cousin’s on the southside. Maybe she went to the police. The station’s right around the corner. I wander through the apartment, waiting for the knock on the door. Maybe the same cop as before. But just like everything else around here, it never comes. I make it to the kitchen and grab an apple. The knife has been waiting. Juliana positioned it like a sundial in the middle of the table. Like my grandmother would say “plain as the nose on your face.”

I sit down and glide the blade between my fingers. I bite into the apple. It tastes like someone’s already ate it. The snow shits puddles on the windowsill. Dray’s body was so cold, so alien, like a cardboard box with a beard. In high school I used to deliver pizzas for this guy who killed himself. He owed money to people and couldn’t pay. They found him with thirteen inches of metal in his ribs. For a while it was a joke. “He stabbed himself. Sure.” But they found them: the hesitation wounds. Those little nibbles you take out of yourself before you’re ready to eat the whole thing. I scrape the edge against my gut, my flank. I let it rest against my neck. Downstairs, I can hear the door opening and closing at La La’s and Clap’s. Family and friends who have just now heard the news about Dray. There are so many people in the world with nice things to say. I drop the apple on the floor and boot it with my naked, bloody toes. Then I look for another place to hide the knife.