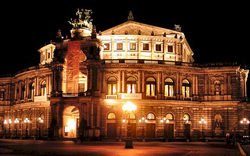 Get me out of here.

When Nadine said, Hey, come with me to the opera, I said, Hey, sure.  Now I'm not so sure. Or I'm totally sure. This is a fate worse than death, a death no one I know would want to sing about.

To my left, Nadine is all aglow. She's crushing my hand. The singers sing and Nadine turns my way and says, Wasn't that just wonderful? To my right is a bowtie and Italian loafers. Bravo he says when the tenor sings. Brava when it's the soprano. It's all bravo to me, or rather none of it is.

"Are you enjoying it?" Nadine says at intermission. We're in the grand lobby, standing at the grand bar.

"Water, sparkling," I say to the lady bartender. She holds up two fingers, I say no. "And a beer."

I hand Nadine her glass and tell her I like the chorus all right.

She looks over her glasses at me. That was the look that got me. I'm a plumber. She had a plugged-up laundry tub in her basement, which I came on the scene to fix. When I was writing up her bill in the kitchen, I told her she had gorgeous plumbing. She gave me her over-the-glasses look and smiled. Then we talked. In a week we talked again. Then in a day, again. I went over for dinner a few times. Then came some this and that, which we both knew we liked.

Now this, which I don't.

The bartender hands me my beer, I'm tempted to say Brava.

Nadine sips. "So you're following it okay?"

"Because we can leave if you want to."

"At halftime?" I take a long drink. Normally I have it from the can. "That would be egregious."

She smiles. I've discovered she says egregious more than anyone I know. It's catchy.

"Important arias coming." She sets her drink on the bar. "Shall we?"

I drain my beer, thinking about Bowtie, the hard seat, and what comes after this and that.


Nadine and I have an agreement. I do not refer to "the fat lady." I come to the opera, and when the second half starts I do not say, When's the fat lady sing? I don't say it, even though there she is up there right now, the size of a bulldozer rolling across the stage, dragging purple drapery behind her, singing her head off.

Nadine lays a hand on my knee.

"Is this it?" I say. I know someone has to die before we can go home, but I'm going to keep my end of the bargain and sit quiet.

"It's all right," she says She rolls up her program, motions me toward the aisle, gets a pinch of my jacket and gives it a pull.

And it's a good thing.  We're parked on the sixth level of a parking structure. Any later, we'd be half an hour getting out. We start down, corkscrewing through the lot toward the street below. We meet fans returning to their cars.

She's talking about the composer, how he wrote and wrote and wrote, then up and quit. Never wrote another opera. And what do I think of that? Amazing, I say. I'm thinking about the cars lining up behind me, how we're going down clockwise, like a flow of water down the drain. We stop and start. Here's an old dame in a fur supporting her old dude gentleman, there's a crowd of shawls and high heels.

"What's your music, then?" Nadine says.

"Take the last train to Clarksville," I sing. And I'll meet you at the station.

"Oh that, she says. "There must be a lot of music in your life. Must have been. What did your wife like?"

"Not this," I say. Hey, there's bowtie and Italian loafers. Not so bravo getting away. "Water drains clockwise," I say. "Parking lots, too."

The brakelights on the car in front of us are giving Nadine a red face.

"Is it over?" she says. She means my wife. Totally, I'm about to say, but Nadine is making this funny face. It's not her over-the-glasses look.  It's full at me, boring into me, and there's this deep crease in her brow. It bothers me to think I've put that crease there. I reach out and sort of tap her forehead. Except it's a stronger than a tap. It's almost a slap. She jerks back in surprise, astonished by what I've done. I laugh to show her it's nothing, and it is. But then for some reason I don't understand, I reach out and I do it again, full on the forehead, this playful swat.

Traffic is moving. We'll spill on the street. I'll have to pull over and explain. She's pulled back into herself so far, I don't know if there will be any explaining.


I wake up a little after midnight to the phone ringing. It's Nadine. I pull open a window in the front room, then sit at the kitchen table in the dark while we talk. Or she talks. She wants to know what happened with my wife, why we split. She wants to know if there was ever any violence in our marriage. I seem like a normal man, she says, but there's no telling. So I will have to tell her the truth about everything, or this thing we have will be all over. While she talks I can hear a dog barking down the street, and beyond that the sound of semi trucks accelerating on the main road, hauling hard through the gears. I watch the digital display on the kitchen clock, waiting for the exact second the next minute arrives, then the next, and the next.

I told her already I thought it was nothing, what I did. Just a little love tap, nothing more. But to her, it's not nothing. It's something big. The first one, she was ready to let it go. But the second time, when I saw she was upset (why didn't I see she was upset?) that was not normal. That was just mean. And the fact is, I just did it. The fact that I didn't think, that's what bothers her.

She goes silent. The dog has gone silent too. I close my eyes and listen to the inside of her house.

"But what’re you listening to?"

"Satellite. All baroque," she says. "It calms me."

We agree to meet next morning. I hang up, sit in the dark, and close my eyes. Where is she? Is she in her bed? Is she sitting on her blue davenport? Does she have her glasses on? Does that white wine she drinks calm her down?

What the hell is bah-roque?

The truth is, I don't really like music. My living room is full of LP's, old vinyl disks from high school and the years after, and if I listen to one of them, it usually takes me back to a time I don't mind forgetting. I don't play the radio in the car. If I'm somewhere and hear "Yesterday," the original one or the musak, I head for the door. I can't get away fast enough.

I haul myself out of my chair and walk into the front room. A sheet of moonlight lies on the floor. Boxes everywhere. It's what happens when you start your new life. You can’t bring yourself to toss your old life in the dumpster, so you lug it along with you, mostly in boxes. In one corner is a box of records. I reach in, pull one out, and hold it up to the moonlight.  Three Dog Night. "One is the loneliest number." I pull the disk out of the jacket, step up to the window, and frisbee the record across the yard. It smacks into a tree. I grab another, Men at Work, "Business as Usual." My wife loved that one, she was so infatuated with all that "land down under" crap. For a few months we switched to Fosters beer and listened to that LP. We had us some wild nights, I’ll tell you. I whip this one out the window too. Led Zeppelin, "Whole Lotta Love," out you go like a UFO. John Cougar Mellencamp “Hurt So Good,” I launch it.  It feels good busting things up. I’m not just getting rid of the past, I’m destroying it.

The Beatles take a long time. My truck is down there, parked under that tree. I  aim for the bed of my truck and crack up as many Beatles as I can.  “The request lines are open,” I say. More golden oldies. Turtles, Beach Boys, Dave Clark Five.

And I’m meeting Nadine in the morning.