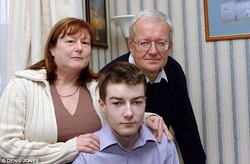 The other night I sat my parents down and told them.  I reckoned they were ready; I reckoned I had the whole thing sussed.

Mum’s skin turned blotchy round the throat and her eyes welled with tears.  “What did we do wrong, Adam?” she said.  You know how it is with mums, first to take the rap for anything.

I pushed the kitchen roll across the table towards her.  I’d known this would be tricky and I’d come prepared.

Dad raised his mug and put it down again.  Like he couldn’t trust his hand to stay steady enough to transport it to his lips.  “I always felt there were summat not right,” he said.  “That red hair of yours for instance.”

Despite the tension in the kitchen, I laughed, running my palm across the stubble at the back of my head.  I’d shaved it off in my early teens in sympathy for Mum when she got breast cancer, then realised I preferred it that way.

Mum’s gaze scanned the room as if she were hoping the kettle or the toaster might bring some sense to the situation.  You could still smell the barbecue sauce she’d used to liven up the chops for our evening meal.  “Is this about you moving in with Jason?” she said.

Dad cradled the handle of his mug, as if still hesitating to lift it.  He hadn’t been ecstatic to find out his only son was gay but he’d dealt with it.  He hadn’t threatened to throw me out or any of that other crazy stuff you hear about from over-controlling parents.  “Jason put you up to this?” he said.

What?  I thought they liked Jason.  Every time he came round ours Dad took him down the allotment to check how the broad beans were doing while Mum rustled up toad in the hole and gooseberry crumble because she said he never ate enough in that bedsit.  I cast my mind back to the briefing with the social worker and tried to keep calm by fixing on how weird this must seem from their point of view.  “Of course not.”

Dad glared at his mug: Best Dad in the world embossed in snot-green on a muddy-brown background.  It had been true when he’d unwrapped it the Christmas I was eleven and it was still true now I was twice that age.  I felt such a prick.

Of course Jason hadn’t put me up to it, but he’d egged me on when I told him I was considering breaking the news.  “Look at it this way, Adam,” he’d said.  “They idolise you.  There’s going to be one gaping hole in their lives when you leave home.  This would give them the chance to go back and pick up on what they had before you came along.”

Mum tore off another piece of kitchen roll and dabbed at her cheeks.  She was a good-looking woman, even pushing fifty, even with her features pulled out of shape by grief.  Had I been a girl I’d have minded more, I think, not sharing her genes.  But I might have been unlucky and inherited Dad’s bulbous nose instead, and what then?  Fascinating the genetic lottery, isn’t it?  Mum used to think I got my carrotty hair from her great uncle Cyril.

“It doesn’t make sense,” said Dad.  “How can we not be your real parents?”

I was almost crying too that Mum should think I’d question their love.  Explaining it to Jason had been so straightforward.  “No, you’ve been wonderful parents, a zillion times better than my real ones ever were.”

“Who are these real parents then,” said Mum, “because I’d really like to meet them?  Find out how they managed it since they never spent a minute with you from the day you were born.”

Dad made a mock gesture of leaving the table.  “Maybes I’d better go and find a dictionary because I reckon real has changed its meaning since I last looked it up.”

A look passed between them, the like of which I hadn’t seen since I left school.  Dad’s voice was gentle: “You know we’ve agreed to disagree about drugs, but you need to tell us if you’ve taken anything funny.  Anything you’re not quite sure about.”

Defeated, I drew the leaflet from the back pocket of my jeans and laid it out on the table, not bothering to smooth out the creases.  Telling the Parents it said along the top, but these weren’t any old parents, they were mine.  It wasn’t right for them to have to discover something so important from a leaflet.  But it sure wasn’t working coming from me.

I got up and stood at the sink, while they learnt how they’d volunteered for an adoption scheme for severely abused infants.  I scraped at the charred frying pan with a spatula while my parents sighed over the poor outcome data for such children in the past.  I gazed out at the patch of grass where Dad had taught me to kick a ball and Mum had taught me to catch it, while they read about the radical research programme they’d taken part in more than twenty years before.

“So they thought that if we believed you were our own son right from the start, we’d just get on with it,” said Dad.  “No sending you back when things got tough.”

Dad raised an eyebrow.  “Which bit?  I seem to remember a very rough patch around three and a half.”

“That would be when the real memories took over from the implants,” I said.  “I guess I was one angry and confused little boy with the life I’d had before I got to you.”

“We got through it though, didn’t we?” said Mum.  “All those memories of you laughing and playing must’ve given us the confidence to make it work.”

Dad flicked through the leaflet.  “All those people throwing off their previous lives and having some experimenter mess around with their memories.  Getting a whole new identity and not even knowing it.  All that disruption just to adopt a child.”

Mum morphed back into Joan of Arc mode: “I’d give my last breath for him.  It’s no great hardship to sacrifice my memories.”

Dad raised his mug to his lips, slurped his tea and grinned, although the drink must have been cold by then.  “Aye, it’s been worth it, whatever it was we gave up.  He’s turned out fine.  Couldn’t wish for better.”

“Apart from the red hair.”  I edged towards them, spreading my arms, ready for the happy-ever-after hug.  Fuck, how I loved these two.  My mind was leaping ahead, looking forward to telling Jason.  I was proud of them, proud of myself.  I hadn’t ballsed up after all.

Mum cut through all that: “I still don’t understand …”

I gave her a goofy smile; I wasn’t so hot on the science but now the three of us had the basics we could piece it together between us.  We must’ve seen tons of movies where they plant artificial memories in the hero’s brain.

Her voice was all aquiver: “Why did you have to tell us?”

“So you can get your lives back.  Now I don’t need you any more you can go back to what you had before.  You might have friends you’d like to see again.  Brothers and sisters …”

I could have gone on, but Mum’s face had taken on an odd purplish tinge as if she might be about to choke and Dad was handling his mug in a most peculiar way, as if considering bowling it at my head.  “Life?” said Mum.  “This is my life.  You are my life.  When you leave to live with Jason being your mother will still be what defines me.  How could you be so stupid as to think I’d want anything else?”

They said a few more things after that but it wouldn’t be fair to repeat them.  I haven’t even told Jason half of what came out of their mouths.  But that was a few days ago and we’re calmer now, and wiser.

I’ve got an appointment with the social worker tomorrow.  I’m hoping she can put me in contact with whoever organised the memory implants.  It shouldn’t be too hard for them to sort out something to take away the memory of what I told my parents the other night.  Failing that, I reckon I’ll have to rewrite the dictionary.  Create another definition of real.