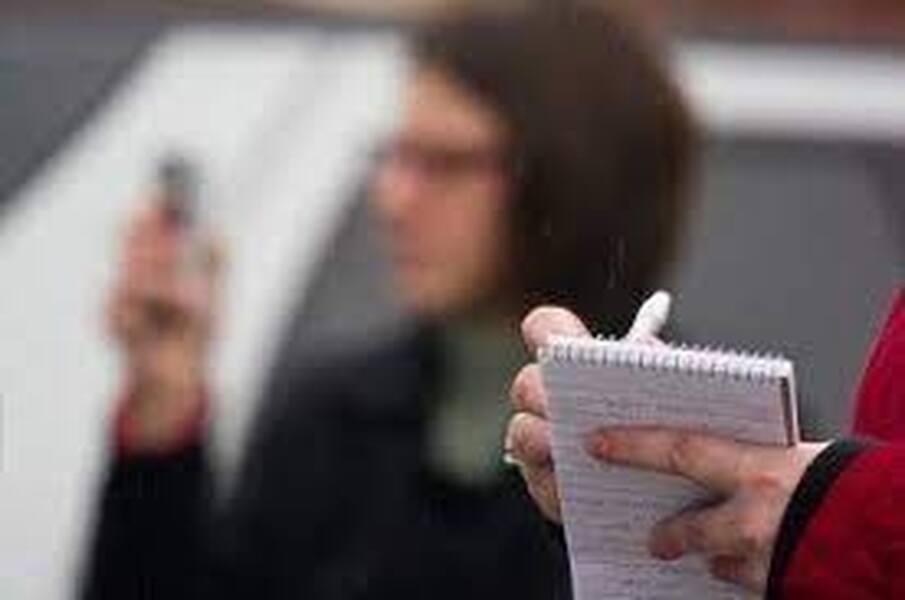 Neff: Nagel wants you in Aspen. He’ll send his jet.
TMB: Thank you for the tweets, Mr. President [laughs].
Neff: What do we tell the teachers?
[pause]
TMB: My sister’s kid was in a car crash—hospitalized. In Denver.
Neff: Lucky for us.

I heard steps and the door opened. Sigrid gazed at me, surprised at first, then suspicious, then worried.
“Where do you want the flowers?” I asked, feeling like a sneaky teenager pretending I hadn’t overheard a thing.
Sigrid made a sweeping motion with the single appendage that was her hand/phone and said, “Anywhere’s fine.” She squeezed past me in the doorway and moved down the hall calling back over her shoulder, “Thank you, about the flowers, that’s very—” but now a staffer had her by the elbow and waved a phone’s screen emphatically in her face.
I turned back to see that the room was not a bedroom at all, but an office set up with all the amenities—phone, computer, large monitor, printer, shredder. Behind the desk sat Tillie in the swivel chair, sizing me up.
“I just love flowers,” she said, her face a smiling mask.
“They’re out there, by the sofa.” I pointed vaguely. “On a cart.”
She brushed her hands over the desk in front of her as if she was smoothing a bed sheet. “Let me tell you something, something you might find quite interesting. It was men who went to the moon . . . but it’s women who are going to save the planet.”
Her eyebrows arched, she looked me full in the face. I thought there was more to come, but no, that was it. I didn’t know what to make of her pronouncement any more than I could read her Sphinx-like countenance—and damned if I didn’t feel stupid about it. Not knowing how to respond, I thanked her, smiled, and retreated.
Two hours later Les Hannifin sent a group text message to all the journalists on the tour: “Due to a family emergency, Tillie will be cancelling her appearance tomorrow night at the American Education Association convention in Las Vegas. She will rejoin us Monday in San Jose.”
Another announcement soon went out to all of Tillie’s Twitter followers along with a link to a breathy account of her niece’s accident, the girl’s prognosis, and a few heartwarming anecdotes illustrating their close lifelong relationship.
I knew from the detailed tour itinerary that Tillie was scheduled to participate via Skype in a venture capital conference at the Aspen Enterprise Institute—a conference at which one Eric Nagel would also be attending. Now, it seemed, she could be there in person, transported on Nagel’s private jet, cloaked with a convenient cover story.
It was all I needed.
At 6:30 the next morning the long hallway outside Les Hannifin’s room was empty and quiet. I paced around, leaned against the wall, and for about twenty minutes thought about what I had to say to him and how I would say it. Finally, the room service woman arrived with his breakfast tray. She took the tray inside and I marched in right behind her. After Les signed for his breakfast, he stood there barefoot, his hands shoved into the pockets of one of the hotel’s terrycloth robes, staring at me with a confused look on his bristly face.
“I need to see her. This morning. Before she leaves.”
He rubbed at his eye and poured a cup of coffee. “Do you have any idea how busy she is? With the president’s tweet—”
“She needs to talk with me,” I insisted.
He peered at me over the brim of his cup. “Needs to talk to you, huh?”
I nodded.
“And I’m supposed to shoehorn you into her schedule between, let me see,” he squinted at his phone, “The Wall Street Journal and Anderson Cooper?”
I repeated my resolute nod.
“You’re putting on a good show there, Abbie, but I can’t—”
“I overheard something, Les. Between Tillie and Sigrid.”

~ ~ ~
I had my list of questions and I’d double-checked that my phone was fully charged and ready to record our conversation. Outside the penthouse suite’s door I paused, took a deep breath, told myself I could do this.
I knocked and Sigrid answered, her face tight and wary. She escorted me through a set of French doors onto a balcony big enough to host a good-sized party. From twenty-five floors up, the view was incredible: the morning sun lit the sailboats in the harbor, and beyond, the blue Pacific extended to the horizon where it was dotted with a string of pearly white clouds. I expected Sigrid to stay for the meeting, but she went back inside, the door clicking closed behind her.
Tillie stood at the shady end of the balcony, leaning stiffly against the railing, small, almost frail in an everyday blouse and light sweater.
“I guess we need to do this, don’t we?” She spoke so softly I could barely hear.
I pulled out my phone. “Do you mind if I record?”
“Not just yet,” she said, a pained look in her eyes. “Later, I suppose, if necessary, but for now, I think what’s most important is that we understand each other.”
“Sure.” But I wasn’t leaving without getting my questions answered, on the record.
I find it useful to start an interview by getting the subject to agree about basic facts, so I recounted the cancellation of the Las Vegas appearance and the planned visit to Colorado. She nodded along.
“The change of plans is not the issue,” I said. “But what you told us, what you tweeted—using your niece’s accident to explain it—” I so wanted to bust her, to say, I caught you red-handed in a lie. You let us down. What do you have to say for yourself? But this wouldn’t get me anything of value for my story. I softened my voice, “You can see how this is a problem.”
She scanned the horizon, as if searching for someone or something to get her out of the mess she’d made. She shuddered and rubbed her hands over her thin upper arms.
“It’s chilly. Let’s go sit in the sun.”
We walked the length of the balcony to where some patio furniture clustered around a low table. She took the rattan peacock chair, its high back flared out in the shape of a lightbulb, its woven seat made a crackling sound under her weight. The sun fell directly on Tillie, warm and golden, brightening her face, giving the tan wickerwork that circled her head a radiant glow. I sat in a smaller companion chair, the sun at my back. Maybe we could work out a deal. She could cancel her new plans, go back to the old itinerary, and I could forget all about what I’d overheard. After all the good work she’d done, didn’t she deserve....
“This bus trip you are on with us—it’s quite out of the ordinary,” she said, her voice stronger now. “We’re doing it for show. Sigrid likes the optics.”
Her brazen words seemed intended to rattle me. They succeeded.
“For show?”
“I usually fly from city to city, continent to continent. First class. And there’s not another form of transportation that releases as much greenhouse gas into the atmosphere—the very thing I rail so vehemently against from the podium only hours after touchdown. I suppose this shocks you.”
I sat stupefied.
“What hangs in the balance of our fight is the fate of hundreds of millions of people. Think about that. Hundreds of millions. Hence the necessity of my going to Aspen.”
The connection eluded me.
“Do you know Eric Nagel?” she asked.
“Not quite rich enough to make the Forbes 100 list, but he didn’t miss by much.” It felt good to say something knowledgeable, even though I’d never heard of Nagel until yesterday and all my knowledge about him came from reading his Wikipedia page.
“We’ve been angling to get close to him for two years—unsuccessfully. Now he wants to meet. The difference he could make. The people he knows.” Tillie leaned back, pinning me in her gaze. Her face soured. “And you come here, with your . . . piddling, sanctimonious accusations.”
I looked away. This was Tillie McBivens, angry, glaring at me with her lips curled as if she had a worm in her mouth. And I—I was used to sitting alone, typing away on my laptop in the library or Starbucks or the crappy cubicle I had access to because I volunteered at an underfunded nonprofit.
“The important question is not my behavior, but yours,” she said, her extended finger pointing right between my eyes. “Do you really want to be on the outside, throwing rocks at me? Battling editors who know in their hearts I’m right. Will you brand yourself as an obstructionist, an impediment to a necessary—a righteous—crusade? You don’t want to be on the wrong side of the greatest moral divide in human history.”