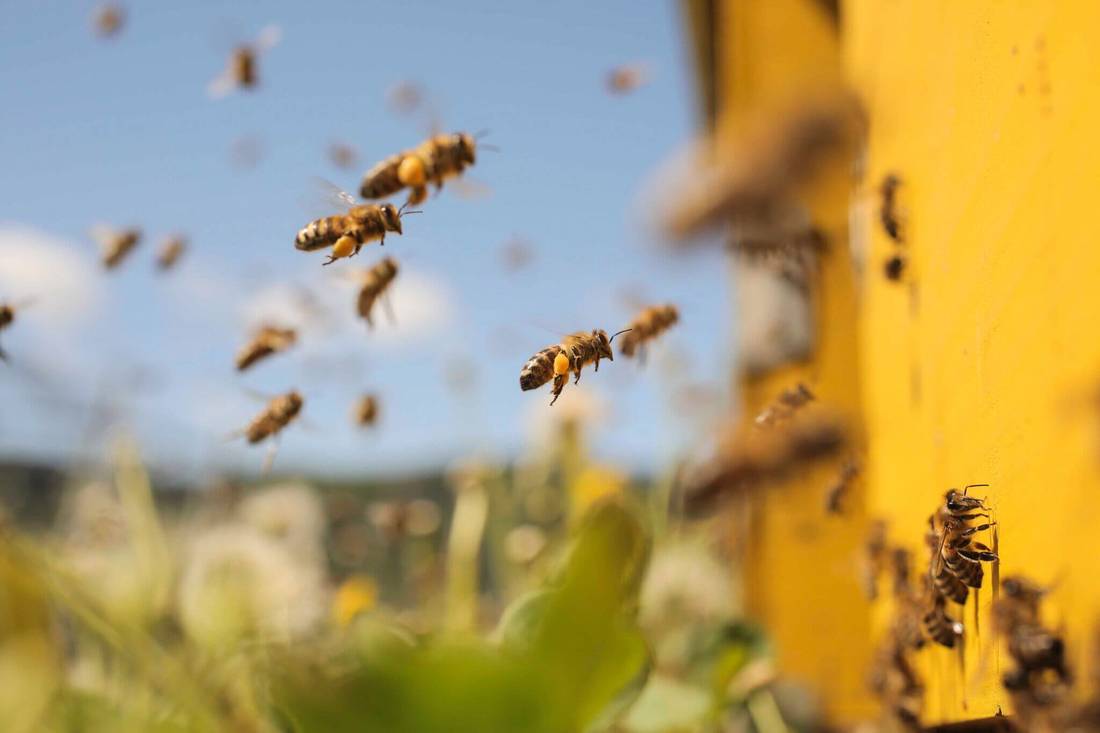 We leave for the church in twenty minutes. A row of black cars waits out front.
I step outside and look up at the sun.
Below me, at the foot of the hill, a stand of beehives faces south, warming in the morning light. This location was chosen with care. In summer, the shade of a giant maple protects the hives from the heat of midday. In winter, a mossy stone wall shields the hives from wind that whips across the field behind them.
I descend the hill. Bees dart in and out of the sun, like dust motes shimmering in a shaft of light. I’ve read that seventy-five percent of dust is dead skin.
The grass is still wet with the morning dew. My black shoes are soon flecked with clippings from the freshly mowed lawn.
The air is alive with the sound of thousands of bees – flying to and from the hives, hovering at entrances, resting on landing boards. Their distinctive sound is defined by the number of wing-beats per second. The pestering whine of mosquitos, 450 beats per second. The silent elegance of butterflies, a languid six per second. Bees achieve their embracing hum with a wing-speed half that of mosquitos: 230 beats per second.
Lessons learned over time come back to me.
Everything a bee does has one purpose: to ensure survival of the hive.
In winter, the workers huddle around the Queen, shivering to keep her warm. They take turns on the cold outside and the warm center of this quivering mass. Press your ear against the outside of the hive and you can hear the deep, resonant buzz of the hive holding on to life – the community enduring in anticipation of spring.
I’m not ready, yet. My job can wait a little longer.
I step inside the shed. It is cool and dark, quiet. The familiar fragrance of smoke lingers in the air – pine needles, dried leaves, crumpled newspaper. I open a smoker, its tin stained from years of use, and breathe in the ashy remains.
The health of a hive is a direct reflection of the love given by the beekeeper. A successful beekeeper has a light touch. Mistakes are inevitable, but the hive corrects for these. In the end, a hive is very forgiving of human error.
Old bee suits – their crisp white canvass stained with sweat, smoke, beeswax, and pollen –hang from hooks. Shrouded in this thick, protective canvas, a beekeeper can safely open a hive. You still get stung. A few stings every year, it’s inevitable.
My first job inspecting our hives was to brush away bees so none were harmed. Post-inspection reports always began, not with what really mattered – the status of brood, nectar, or pollen – but with praise for my brushing.
During inspections, my father announced every step in a voice that hovered just above a whisper. He was not talking to me. This was not instruction, but reassurance.  His audience was the bees, the hive.
Work gently. In this way you do not arouse the aggressive, defensive instincts of the hive.
Now it is my turn to say everything will be fine, to reassure in the face of disruption, to make a promise of continuity.
As I grew older, my duties during inspections changed.  When I could lift boxes, remove frames, and – after patient guidance – spot the queen, or the warning signs of an impending swarm, I became an equal partner.
Most recently, the job of brushing was taken up by the man who first taught me.  But it was still his voice the bees heard, gently explaining, step by step, what was going on.
Many cultures believe bees are a link between life and the afterlife.
Maybe it’s because the dark world of the hive is akin to what we imagine we face in death. Then again, before bees were domesticated, people harvested honey from hives in caves, themselves believed to be passageways between our world and the underworld.
Less well known is the fact many bees burrow into the ground, literally burying themselves at the end of the day, reemerging the next with the rising sun: an eternal cycle of life, death, and resurrection.
Honey never spoils. Archaeologists have found jars of honey in tombs, still edible, buried thousands of years ago as food for the departed.
Honey and beeswax have been used to embalm the dead.
Honey speeds the healing of wounds, preventing scars and protecting against infection.
“Telling The Bees” is an old tradition. When a beekeeper dies, you need to share the news with the hive. You need to tell the bees who they have lost, tell the hive who will care for them now.
If you don’t, the hive will sense the loss and cease to be productive, or even leave.
There are stories – provided by too many witnesses to dismiss as myth – of bees visiting the funerals and burials of their keepers. The bees are never hostile. They cluster in the shade of a tree, fly above the procession. It is clear that they, too, are mourning the loss.
I spot a calendar tacked to the wall of the shed. In familiar handwriting, inspection days are noted and checked. With time, with age, once-firm letters have lost definition, but I can still feel the groove made by the ballpoint pen pressed into the paper. I see that tomorrow, Saturday, is an inspection day.
This is now a promise for me to keep.
I look at my watch. Time is running out.
I leave the shed and walk over to the stand.  Stopping at each hive, I whisper the news. My voice grows quieter each time. The message, more and more private. By the end, I’m speaking in little more than a silent prayer.
In the distance, the cars are beginning to fill. An impatient wave beckons me to hurry.
I turn and tell the bees I will be back.
Tomorrow is an inspection day. I have a promise to keep.