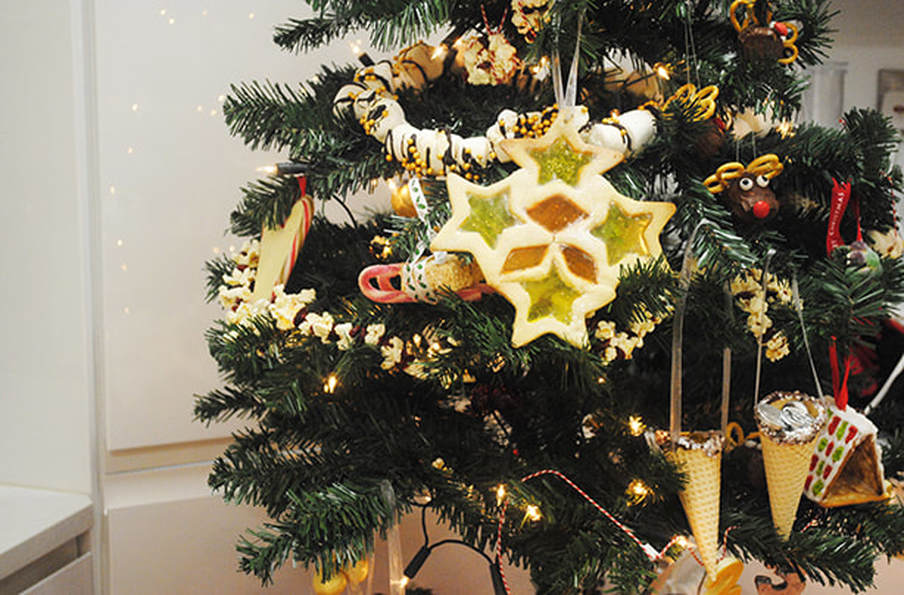 A Christmas to Remember
David Henson


Roy, Lorraine and their son, Richie, hurry through an aisle of witches and zombies to the Christmas trees. “How about this one?” Roy holds out his arms as if to hug a blue spruce.
“It’s nice, but not very big.”
“Get this one! Get this one!” Richie shouts from a towering Douglas-fir beside them.
Roy and Lorraine turn toward their son. “Is the ceiling high enough?” Lorraine says.
Roy whistles softly. “Probably not.” When Richie starts crying, Roy snaps his fingers. “But I’ve got an idea.”

Lorraine pulls the SUV up to the store’s loading zone where the sales clerk is waiting for them with three giant boxes. With the clerk’s help, Roy and Lorraine heft one of the boxes into the hatch of the SUV, wrestle and strap a second to the roof-rack, and scrunch the third into the back seat, forcing Richie to ride on his dad’s lap in front.

Back home, they grunt and skid the boxes into the great room. After putting the two bottom pieces together, Roy needs a step ladder to get the third part in place. As expected, the assembled tree bends at the ceiling.
“Now what?” Lorraine scoops up Richie, who has fallen asleep on the couch.
“Just watch.” Roy climbs down from the ladder and goes into the basement. A minute later, he returns with a circular saw and cuts a large opening in the ceiling, bits of drywall and pink insulation falling like dirty snow. When he’s done, the top of the tree stands straight and reaches into the attic.
“Perfect,” Lorraine says. “Look, Richie.” She jostles her son, but he remains asleep.
“We can clean up this mess in the morning.” Climbing down the ladder, Roy steps awkwardly from the bottom rung to the floor. The saw screams and lurches at his face. He jerks away and hits the kill switch. “Whew, that was close.”
Lorraine is staring up at the fir. “It’s going to be the most magnificent tree on the block,” she says. “Maybe the whole town.”

Over the course of the weekend, Roy makes three trips to the store to buy additional decorations. By Sunday evening, the tree is teeming with blinking lights, silver garland, gold ribbon, strings of plastic popcorn, and ornaments in the form of tiny rockets, apples, toy soldiers and almost everything the store had to offer.
“What do you think of the tree, Richie?” Lorraine gently nudges her son’s foot with her own.
“More light.”
“More lights?” Roy says. “Richie, I don’t think—”
“He’s right.” Lorraine points to a section about five feet from the top.
... Roy returns from the store with two more strings of lights and loops them onto the tree. “Ta da” he says, plugging the extension cord back into the outlet. The lights flash briefly then go dark with a loud snap. “Darn fuse,” he mutters. He feels in his pocket for a penny and heads for the basement.
“Let’s try this again,” he says, back upstairs. “Ta da.” This time the lights stay on.
“Oh, you’re good.” Lorraine bends down and kisses the top of Richie’s head. “You, too, little man.”
“Need pretty boxes,” Richie says.

Within a week, presents lap out from the tree and cover half of the great room floor. Lorraine shoots several photos and emails them to the local paper for its Great Christmas Tree Contest.
“See, Honey,” Lorraine says, pointing to the name tag on one of the boxes. “R I C H I E ... This is for you.”

“Mine.” Richie tugs at the bright green paper.
“Oh, no you don’t.” Lorraine gently squeezes her son’s hand. “Not till Christmas.”
“Honey ... Richie,” Roy calls out from the dining room table. “I’m going to carve the practice turkey now.”
“Roy, be careful with that electric knife. Those blades are razor sharp.”

After returning from the emergency room and putting Richie to bed, Roy and Lorraine sit at the kitchen table sipping hot chocolate. Roy sports a bandage the size of a golf ball on the tip of his left index finger. Lorraine kisses it gently. “Thank God they could reattach it.”
Roy nods then looks at the sea of presents. “Do you think we’re going overboard?”
“It’s the first Christmas Richie’s really aware of. Let’s make it one to remember.”
“To going overboard.” Roy tinks his cup to Lorraine’s. “All these gifts are getting expensive though. I’ll start working Saturdays. Maybe get a bigger bonus.”
“Me, too. Daycare’s closed Saturdays, but I’m sure Mom’ll take Richie. I hate to be away from him another day, but it’ll be worth it.”
Roy stirs his cocoa. When he removes the spoon, he can see reflected in the utensil a portion of the bright Christmas tree. Something doesn’t look quite right. “What’s wrong with this picture?” he mumbles to himself. He studies the tree’s reflection and realizes the image in the spoon is upside down.

Richie’s screaming wakes them. They rush to his room. “Richie, Honey, I’m here.” Lorraine goes to her son, and Roy turns on the light. “You’re having a bad dream.”
“No,” Richie blubbers and points to the ceiling. A bat is flapping around the room.
“My God. Lorraine, get Richie out and bring me a broom.” Roy shuts the door behind his wife and son and opens the bedroom window. Once he has the broom, he’s able to shepherd the bat outside.
Lorraine and Roy coax Richie back into his room. “It didn’t bite or scratch you, did it?” Lorraine kisses her son’s forehead. “Do all bats have rabies?” she whispers to Roy.
“I don’t think so.” Roy touches a scratch on his son’s arm. “Richie, did the bat do this?”
Richie whines. Roy goes to their bedroom and returns tapping his phone, then breathes a sigh of relief. “Less than one-half of one percent.”
“I think somebody needs more presents after this,” Lorraine says.

The next day, Roy goes into the attic and stuffs insulation into every opening where he can see to the outside.

~ ~ ~
​
Roy and Lorraine create a path through the presents so they can walk across the great room. “I’ve got an idea,” Roy says. “Take Richie to the kitchen.” As Lorraine does so, Roy begins piling gifts.
“What’s Daddy doing, Richie?” The boy, engrossed with a button on his shirt, ignores her.
Roy stacks more presents and creates a maze. After a few minutes, he stands at the Christmas tree. “See if you can find your way here, Richie.”
The boy whoops and giggles as he charges from the kitchen through the maze straight to his father. “Too easy,” the boy says. “More presents.”
Every Sunday Roy and Lorraine toughen the maze with more gifts. Sometimes it takes their son a couple of tries, but he’s never stumped. They’re so impressed they shoot a video and post it online.
“OK, Richie,” Roy yells from the tree, “if you can make it through this time, you’ll be The Grand Maze Master of all time.” Roy has to stand on his tiptoes to see over some of the walls of presents. “I’m going to count down from 10. You know how that goes, right?”
“Get ready, Honey. Do this.” Lorraine, standing next to Richie in the kitchen, grabs her foot and pulls it up behind her like a sprinter stretching. She frowns. “Is that a rash?” She points to Richie’s arm.
“I don’t feel good,” Richie says.
Lorraine puts her hand to his forehead. “Roy, don’t —“
“Ten!” Roy yells, not hearing his wife. At the sound of his father’s voice, Richie stumbles into the maze.
“Roy, stop ... Stop!”
Roy keeps counting, unable to hear Lorraine over his own voice. When he sees his wife run into the maze, he realizes something’s wrong — just as a wall of presents topples, and Richie begins screaming.
Roy and Lorraine clamber over the boxes toward the sound of their son’s cries. By the time Roy gets there, Lorraine is flinging presents aside. They see Richie’s feet — one shoe on, one off. Roy grabs Richie’s ankles and gently tugs the weeping boy into the clear.
Roy picks up his son and hurries into the kitchen with Lorraine. Richie continues whimpering. Roy looks into his son’s eyes. “You OK, Buddy?”
Lorraine takes the boy from his father’s arms. “We need to go to the emergency room.”
Roy pours a glass of water and hands it to Richie. “Here, son. Take a sip.”
Richie looks at the water and whimpers.
Oh no! Roy thinks and quickly looks at his son’s arm. The rash is all but gone. Richie then takes a big gulp from the glass. Roy sighs with relief.
Lorraine sniffs the air. “Do I smell smoke?” She hands Richie back to Roy, goes to the basement door, puts her palm to it and screams. She runs back to the kitchen, grabs her phone and calls emergency. “Fire Department’s on its way. Let’s get these presents outside.”
After gently setting Richie on floor, Roy joins his wife, and the two fill their arms with boxes. They head for the front door, but get lost in the maze. Richie shrieks. Roy looks at his wife. “What are we doing?” he says. He and Lorraine bulldoze their way to Richie then, kicking presents aside, the couple and their son hurry out of the house.
​
Blue Lake Review