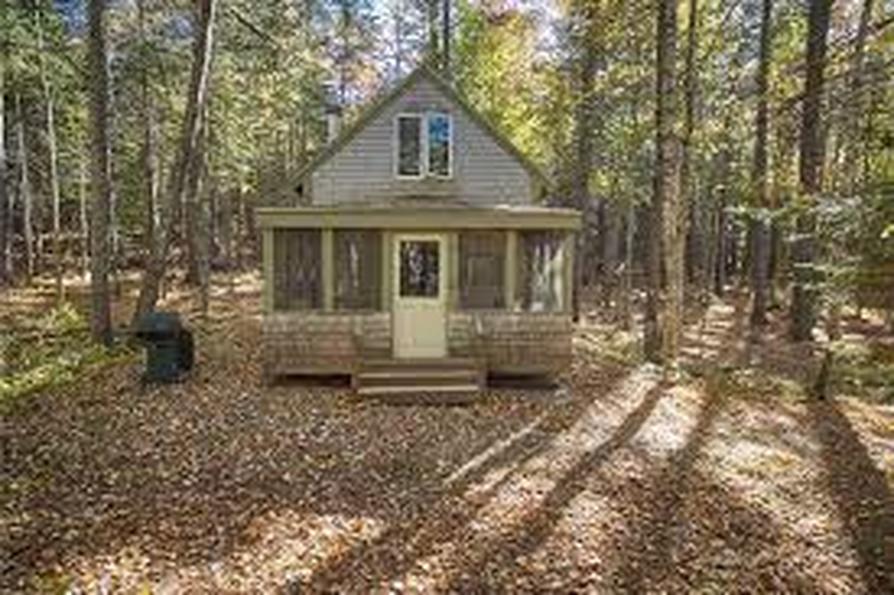 Diane bolts up in bed, terrified awake by the sound of the cabin door creaking open. Twisting to free herself from her tangled sleeping bag, she listens, heart thumping, to hesitant footsteps on the other side of the flimsy wall.  An intruder and one to whom she will succumb.
As close as a touch, she hears feet shuffling across the small adjoining room and chokes back the cry threatening to erupt from her frozen throat.
“Fuck, that hurt,” a man’s voice growls.
Alone and far from neighbours, Diane struggles to control her imagination. Were she here, her daughter would chastise her for overreacting. “Christ, it’s just a kid who’ll be scared off by a noise.”
A kid in the woods at 3 a.m.? How could he find his way up the hill in the dark? Not by car, that’s for sure. A week in the woods has reconditioned her city ears to sleep through night noises: the sudden cry of a loon or a snuffling nocturnal animal foraging for food. But the unwelcome sound of a car rattling over the gravel road would have jarred her awake.
Diane stretches forward, craning her neck to identify the sounds: the fridge door opening, the cupboard drawer creaking, and liquid splashing into a cup. The intruder is so close she can smell his musty hair.
She sees the headlines: “Cariboo Lake Woman Murdered by Robber,” then hears Marnie’s derisive snort, “Expecting the worst as always.”
Urged to action by a blast of music, Diane dangles her feet towards the frigid wooden floor and gropes to find the window. A blinding light bursts through the darkness. Diane recoils, shielding her face with her bare arm.
“Hey?” a male voice bellows angrily. “Is that you?” Startled, she stares into the harsh light.
“Fuck, you scared the shit out of me,” the man shouts. “I thought it was a bear.” She squints at the shape. Does she know him?
The light lowers. It’s the creep her daughter is dating.
“What are you doing here, Jimmy?” she says, angered by the tremble in her voice.
“What are you doing here?” he retaliates. “You scared the shit out of me.”
“I’m staying here. It’s my cabin.”
He turns abruptly and clicks off the radio. “Marnie didn’t say you’d be here.”
“Where is she?”
“In Vancouver. She could have warned me.”
She might have, if she had known. Her parents didn’t e-mail her to report every spat or when they had returned to their corners to rest for the next round.  This time she has chosen a favourite corner—the cabin—where she could be off everyone’s radar screen: no phone and no e-mail. Her husband knows she will be back with renewed punching power and even her boss grudgingly accepts her vanishing acts.
“I’m here for peace and quiet,” Diane says, but the irony falls on deaf ears.
“Jeez, I thought it was a bear.”
“So you said.”
“Let me get my drink. I found the rum. Want some?”
She follows Jimmy into the main room, and instructs him to point the flashlight at the table so she can light the lamp.
“Don’t you have electricity?”
“We cut it off in the winter.”
Diane pours herself a dollop of rum, glares at it, tops it up, and then drops down at the small wooden table opposite the boy. The soft flicker of the oil lamp illuminates a small circle, like a campfire with the forest shadows hovering in the corners.
“So why are you here?” she finally asks, straining to be civil. After all he is “Marnie’s ‘whatever’—almost family, rue the day. The last thing she needs is to have a battle with her daughter; she’s already lost her son for being, as her husband had shouted at her as she left the field, “Too God dam judgemental.”  Jimmy grimaces, uncertain what landed him up in this God forsaken place with this woman.
“Never mind,” Diane says suddenly jumping up and taking the rum. “Let’s get some sleep. We’ll talk in the morning.”
Before Jimmy has time to protest, Diane grabs his knapsack and a flashlight and leads him outside to the sleeping cabin, hidden in the bushes. His shattered face signals that this is not his preferred choice but what the hell. It’s her cabin. She needs to get away from him and get herself off the boil: plan how she will react. Is there is way to turn this into a positive, she wonders. Could anything involving Jimmy be positive?