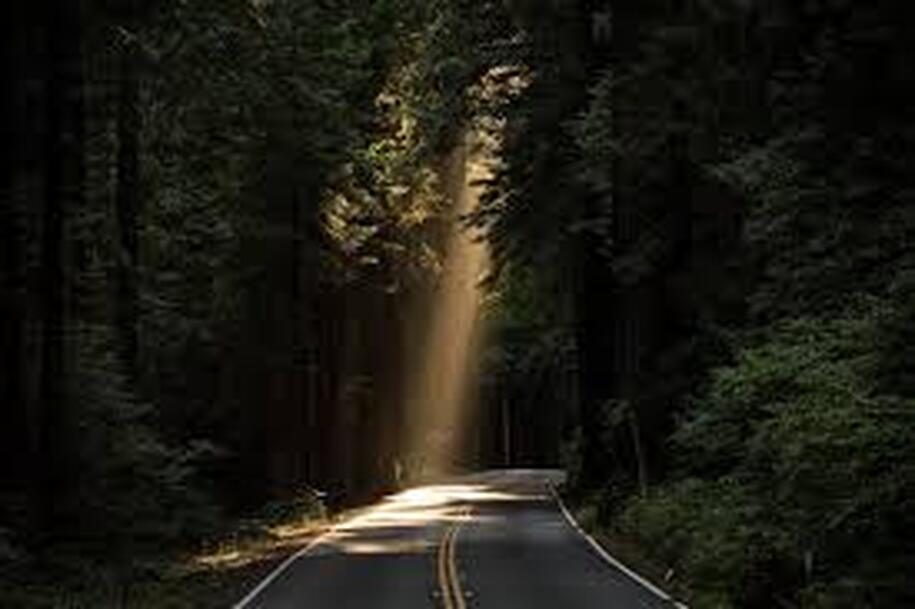 
A hospital bed rolled down a white hall, pushed by a tall male doctor and laid upon by a young man, both oblivious to the two Guides standing along the wall. The tall doctor slowed as he approached the swinging double doors, knowing that the motion sensor would activate to let them pass.
The eyes of the young man, who had been lying flat on his back, did not look scared to Mary, even though he was on his way to an Operating Room. He merely seemed a little nervous.
He had no reason to be scared, Mary knew. Everything would go all right with the young man’s surgery, whatever that might be.  Or else Malthus or herself would have been holding a green file with the young man’s name on the tab.
As the double door swung shut, Malthus turned to Mary, “Brave young fellow.”
Mary nodded.
Malthus’ face looked serious, the brown skin of his forehead stretched as he struggled for the right words to express his apparently important thoughts. “This will be a very important night for you, my little Mary. You will remember it forever, young one.”
Even though Mary had the appearance of an 11-year-old girl, her essence was older and wiser than that of a mortal child. Yet, she did not mind when Malthus referred to her as “young” or “little,” because next to Malthus most Guides were young and little.
“Why do you say that?” Mary asked, hoping her instincts were not right. She was not ready for it.
“Tonight will be your final night as my trainee,” Malthus replied.          “Tonight I will teach you the final lesson, the most important lesson for all Guides to learn and understand.”
“Am I ready?”
“I think you are, my Mary,” Malthus replied, his gray hair catching a hint of the fluorescent lights.  Sometimes Marry envied Malthus’ gray hair, because it was a mortal symbol of age and knowledge. Mary‘s hair would always be long, curly, and dark black.          “And I believe,” Malthus continued, “that down inside you know that you are ready, too.”
Something in Malthus’ hand caught Mary’s attention.  Green files.  Plural.  Two, instead of one.
Noticing that Mary had spotted the files, Malthus held them up and said, “Two.”
“Two?”
“One for me and one for you,” Malthus answered, a grin forming and spreading.
If Mary could still experience sensations of the flesh, then she would have had a cold chill.  She would have trembled and shivered over her entire body. However, death had taken those types of experiences from her.  Sometimes, though, Mary missed them.
“These two cases were personally picked for us, for the lesson they will teach,” Malthus said.  “Walk with me, little one.”
Malthus headed toward the double doors, Mary a step behind.  The door’s sensor picked up their phantom movements and activated, forcing the two doors to slowly slide outward.
Mary sped her pace, because Malthus did not like when she walked behind him.  They were equals in his mind, which meant that Mary should be beside him when they worked.
“This file is yours,” Malthus said, passing one of the files to Mary, before quickly adding, “Do not open it, yet.”
Mary obeyed.  However, the name was visible on the tab.  Tre Scott.
“I know that you sometimes cry after a job,” Malthus blurted, but even his blurts were well planned.  “Not as much these days, but the tears are still there, tying you to the living world. Which could be good, for some of our kind.  Guardians and Watchers, for example. That is why Boss lets that one sensation remain. Yet, those tears are not suited for Guides. We must be done with them, tonight.”
Mary was surprised at how blunt Malthus was being.  He was right, though. She knew that. Malthus always knew best.  And Mary would follow him anywhere. As a trainee and friend.

Tre Scott continued to hold on.
Mary witnessed the ongoing struggle from the empty doorway.  At the sight of Tre’s fragile body, the protruding wires and the IV, several tears escaped Mary‘s eyes.  They exited without a warning, there was not keeping the tears in. Yet, Mary was immediately ashamed of them.
Tre was obviously deep within a medicated induced sleep, most likely for the pain.  Mary wondered whether or not Tre was having a soft dream or hard nightmare.
Mary could not take another step forward.  She could only watch from afar, afraid that if she moved then she would break down to weep.
Loose skin showed Mary that Tre had once been a healthy, heavy boy, before the cancer had forced his body to begin to eat itself.  Now his flesh hung low, below his neck and around his eyes. Not only did Tre’s skin sag over his fragile, tired bones, but also the tint of Tre’s permanent tan had lightened, like soft caramel that had been diluted with milk.
Small lumps covered Tre.
Mary knew the lumps.
Before death, Mary too had hurt, while being sick and dying.  That once was her. Lying in a bed. Suffering the woes of death.
Was that why Tre had to be her first solo case?
Putting those memories back to rest, Mary scanned the room, finding Tre’s mother, asleep in a chair, which had been pulled right up to the edge of Tre’s bed.  Carla. Mary knew the name from Tre’s file. Carla Scott.
With her head cocked to the side, Carla slept; her snoring came in sporadic spurts.  Her eyes danced wildly behind her eyelids, as a dream played out for her mind. Soft dream?  Mary only could wonder.
“Mom!”  Tre suddenly cried out, temporarily shaking off drugged forced slumber.  Carla jumped to an upright position, both her hands quickly finding Tre’s arm.  “Mom!” Tre repeated.
“I’m here baby,” Carla assured him.
“Mom!  Where are you?”
“I’m here.”
“Mom!  I can’t find my bear,” Tre said.  Mary knew, by the lost look on his face, that, due to the morphine drip, Tre’s mind was no longer under his own control.  “Where is my bear, mommy?”
Through a burst of tears, Carla managed to say, “Look in your closet, sweetheart.  I think that I saw your bear in there.”
“Okay.”  Tre’s eyes closed as he drifted away again.
Letting go of Tre’s arm, Carla folded her hands to pray.  “God. Please don’t take my little man away from me. Please.  Will you make him strong, again? Will you make him strong enough to fight, again?  He can beat this. He can get better if you give him the chance and strength. I need him.  He is all that I have. Don’t take him away from me, please.” Unfolding her hand, Carla placed her face within them to weep.
“Don’t take…” Tre mumbled.
Mary retreated into the hallway.  There would be time, Mary knew, for her to listen and learn.  But, for the moment, she could not be in that room.
Tre was not going anywhere, yet.  That was why the time-of-death had been left blank, because Boss had given Tre all the time that he needed.  And Tre would take the time to hold on to life with the grip of a spirit twice his age.

For three more days, Mary watched Tre, less than alive but more than not.  The young boy’s instinct and willpower kept death, meaning Mary, on the outside looking inward.  Neither one of them could lay a hand on Tre.
Without the need of sleep or food or a comfortable seat, Mary chose to stand still in the far corner of the room, listening and learning, only shifting when that space was needed by a mortal person.  The tears flowed less often. Yet, they still seemed to flow.
Carla never strayed far from Tre’s bedside, as if her presence alone was keeping him alive.
Suddenly, the pieces came together, and the lesson that was directly in front of Mary’s face finally stood out.  Tre was not fighting merely to live, but he was staying alive because he would not leave his mother. She needed him.  He heard her prayers. In addition, like all little boys, Tre did not want to leave his mommy.
Like Paul, Tre was surviving, trapped between two separate worlds.  One that he was no longer part of. One that called to him but he refused to answer. Also, like Paul, Tre was in pain.  Yet, Tre chose to be stuck, with the pain, for the sake of another.
Mary saw her own image as she thought about Paul and Tre.  Her tears did tie her to the mortal world, as Malthus had said.  But, they also meant that she was not fully in her own world.  She lingered in the between, refusing to let go and move on. She needed to move on if she was going to commit herself completely to her duty.  There was no between when dealing with death. It was all or nothing.
Mary was death, or at least the guide through it.
Besides, death was not the end, but the trail from here to there.  To cry for the dying was to cry for those left behind. That was no longer Mary’s world.
As the thoughts flowed, piercing chirps of alarms interrupted Mary’s epiphany.  Tre began to convulse, gripped tight by a violent seizure. A groan squeezed through his clenched teeth.  While Tre’s body shook, monitors cried out for someone to help.
Carla leapt from her chair, bound for the door.  Passing an inch from Mary, Carla rushed in search of a nurse, but a small group of them were already jogging toward the room.
“Help him!” Carla begged, following the nurses back into the room.  “Help my son!”
“Stand back, Ms. Scott,” one of the nurses insisted.
Carla took a step backward, but refused to go any further.
One of the nurses gripped Tre by the shoulders, in an attempt to stabilize the quakes, but the violence would not be completely calmed.
Mary exited her corner to stand next to Carla, becoming close enough to hold the hand of Tre’s mother.  “You have to let him go,” Mary told her.
A doctor charged in to join the nurses.  More grunts rose from Tre, subconscious sounds of pain, which reached into every fiber of Tre’s body and mind.  His flesh wanted the suffering to be over, yet Tre still fought to live.
“You have to let him go.”
“Stop!”  Carla shouted.  “I don’t want him to hurt anymore!”
The group ignored Carla’s frightened cries.
“I am his mother,” Carla continued, “and I said to stop!”
They continued to work.
“Tre!” Carla called to her son.  “It’s okay, baby. You can go. I want you to go where the pain can’t get to you anymore.”
The convulsing stopped.  Tre became very still. As if it was a sigh of relief, Tre let out a long final breath.
From his flesh, Mary watched Tre slide.  He was no longer the sick, weak, thin little boy that was in the bed.  His girth and color had been restored. No lumps remained. The sickness had been left behind him.
Confusion was always the first emotion of the newly arrived Traveler.  Tre stood and looked around, deep in that emotion. Mary quickly spoke, “Hello, Tre.”  Tre’s gaze went on her. “My name is Mary.” Tre smiled. “Take my hand, Tre. The way is long but I know the path well.  I will guide you to your new life, far away from the pain.”