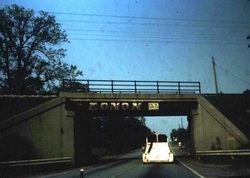 
“What do you think would happen if I dropped this over the side?” my friend, Gordy asked.
I told him he’d probably kill someone, cause a wreck.
“But it’s only a pumpkin.”
Gordy was fat bordering on obese, and with all that extra meat in his cheeks he looked a bit like a jack o’ lantern himself.
“We’re a long ways up.”
Below cars zoomed in both directions.  It was Friday night, school just finished for the year, summer looming.  Gordy’s father and mine had both been sent to prison for meth-related reasons.  Now our mothers really counted on us, his more than mine, I supposed, but the extra pressure felt like a noose around my neck.
“Where’d you find that thing anyway?”
Gordy shrugged.  “Around.”  He was fat but pathetically loveable, like an ugly dog.
We had a few more months, then it was college, him going to U of W and me to Central.  I had a job at Blockbuster but Gordy’s mom didn’t want him working.
A red Buick honked at us, so Gordy flipped it off with his chubby finger.
Gordy’s twin wasn’t heavy.  Quite the opposite.  She had an eating disorder.  They were Irish and so she was already pale to begin with, but she’d gotten so thin now that it was possible to see a few blue-veined rivers sniggling down her neck.  She was always tired and sometimes when I was over she’d be asleep on the sofa, so I’d count the freckles on her skin.  Once I got to seventy-two.  Once I leaned over and almost kissed her.
“Do you think we’re still going to be friends, I mean, like for how long?”
I wanted to tell him forever, but lately I’d been trying to stop lying.  “They say it’s a small world.”
Gordy gave me a studied look, wondering if I was screwing with him, then we watched the cars.  Sometimes all the secrets gurgling up inside me made me want to scream and the only way to avoid that was to imagine myself a different person.  It was easier to do up on the cat walk, with all those automobiles hurrying to get somewhere.  I wondered what had made the drivers pick such and such brand of buy.  I wondered why white instead of blue.  I imagined myself in one of the expensive jobs, older, with a job and a wife, a place to go.
“Come on,” Gordy said, “I gotta get back.  Besides, it’s freezing out here.”
When I told him to go ahead without me, he turned and did so, holding the pumpkin by its hard gray stem.  He looked like a hunter with the head of his kill, sauntering off to find himself a taxidermist so he’d have a trophy of his own to put up on display.
When I was younger my brother and I liked to play in the tree back of our house.  It was a ways off the ground, built between a triangle of trees and I never got used to the way it would sway and lurch with the wind, throwing me off balance.  Billy liked to scare me.  He’d fake push me, and I’d panic but try not to show it because I was older.  One time we were up there and he’d done enough to tick me off that I gave him a shove.  I don’t know if I really meant to push him all the way out—I’ve thought about that a million times—but he flew just the same.  His scream was sharp and short.  His body slammed the boulder below so hard that dirt dusted up around it.
Mother told me accidents happened, and I said I knew that.  She said I’d have to get over it if I was ever going to have the life that God had intended for me.  That was two summers ago.
Below me now the cars kept coming, going.  I wondered if I could jump without hitting any of them, without doing damage.
A few years back, a girl my sister knew committed suicide on account of a boyfriend, a breakup.  My sister said suicide was the most selfish act ever.  And maybe so.  She was angry and sad for a lot of months, but she wasn’t now.
I looked up at the sky above.  I didn’t know about constellations or astronomy.  I just thought the stars were pretty.  They looked so far away, glittery and alive.
One of those monster semi trucks soared under the cat walk but it blasted its horn first and so I jumped, my heart tripping fast.  I put my hand on my chest and felt it pulsate.  While it was there, I said an oath.  I made a promise to myself.  I vowed that things were going to get better.