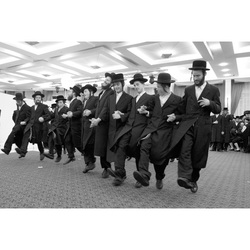 Andrea looked in the full-length mirror on the closet door. The ankle length black velvet skirt and the matching jacket (long sleeves…not too tight) would work, though she’d probably sweat her brains out. She put on black pumps; that was a safe choice. Makeup and jewelry were fine. No taboos there, as far as she knew.

She struck a pose in the doorway. “Ta dah! How do I look?”

Richie turned off the TV. “Gorgeous. How do I look?”

“Gorgeous. The kippah is a real fashion statement.”

Richie took it off his head, and showed her the inside.

Andrea had lived in New York seven years, and she’d never been to Boro Park, or wanted to. Her family always had a Christmas tree, and never lit Hanukkah candles. Going to an ultra-Orthodox wedding was definitely not on her  ‘Bucket List.’ If you marry a yeshiva boy from Brooklyn, it’s bound to happen sooner or later.

“It’s not like you’re going to be surrounded by old men with long white beards, side curls and black coats, when you walk down the street,” Richie assured her.

When they got off the train she saw that he was right; there were also men wearing long grey coats, and there were little boys with side curls, and women in sheitels or scarves covering their heads.

“Really diverse, just like you told me.” She made a face at Richie.

The outside of the Four Fountains catering hall had giant faux Doric columns and, true to its name, four fountains lit with colored lights. As they walked inside Andrea kept reminding herself, “No shaking hands, no hugging.”

Richie was swept away by his old friends from Yeshiva Rambam almost immediately, so Andrea stood there silently evaluating the women’s wigs. Obvious…obvious… not bad… red hair-a really poor choice…why is a girl who looks 15 already married?

An extremely angry, and clearly Chasidic young man had a fight with the manager in the middle of everything. He was disgusted that the catering was only Ultra Orthodox Kosher, not Ultra, Ultra Orthodox. He left with his family before the ceremony even began.

She wasn’t surprised. Richie had an uncle who always brought his own boiled chicken, paper plate, plastic fork and knife whenever he went to anyone’s house for dinner.

Sitting with the women during the incredibly long ceremony was tolerable, sitting with them at the incredibly long dinner, not so much. Three of the women at her table only spoke Yiddish, and everyone was surprised that someone as old as she was (30) didn’t have kids.  She could barely see Richie across the mehitzah. God forbid a man might accidently touch a woman in the middle of a hora.

The agreement was Andrea would violate her feminist principles and sit with the women, and Richie would drag himself away from his friends by 10, so they could go back to the Upper West Side in time to do something she would actually enjoy.

At 9:30 the band started playing. At 10:30 Richie and his friends were still dancing wildly in their half of the room. The women at her table got up to dance with each other, and tried to get her to join them. She shrugged and pointed at her leg. “Sorry, bad knee.”

She had to draw the line somewhere.